Rachel Furness equalled David Healy's record of 36 goals for Northern Ireland with a hat-trick in an 11-0 thumping of North Macedonia in World Cup qualifying.

Simone Magill netted four in Skopje as they moved level on points with Austria in second place in Group D.

Rebecca McKenna, Lauren Wade and Kirsty McGuinness scored in the first half.

Magill made it 10 and Rebecca Holloway completed the rout that surpassed their 8-0 record victory over Taiwan in 2017.

Manager Kenny Shiels had demanded a statement performance in the build-up to the game and his players delivered in style to keep the pressure on England and Austria, who had both put eight past North Macedonia, in the race for a World Cup spot.

Northern Ireland were expected to dominate against a side 83 places lower in the world rankings, but it was a sublime and clinical showing in the first-half as the visitors netted seven times.

The top two sides in Group D face-off on Saturday and, with at least one guaranteed to drop points, NI move level with Austria and just two points behind leaders England at the halfway point of the campaign.

After seeing plenty of the ball in the early stages, Northern Ireland took the lead inside four minutes when Furness kept her cool to convert from close range after Demi Vance delivered a brilliant, whipped ball to the back post.

McKenna saw an effort brilliantly cleared off the line by Viktorija Nedeva moments later, but the right-back smashed in her maiden international goal on 10 minutes with a composed finish after being afforded too much time and space in the area.

Magill made it three when the in-form Everton forward slotted home after racing onto Furness' flick-on, and the latter was involved again as she was hauled down in the box on 15 minutes.

The Liverpool midfielder dusted herself down to dispatch the penalty and the 33-year-old had another opportunity from 12 yards when McGuinness won a soft penalty after Marissa Callaghan's long-range effort rattled the crossbar. This time, though, goalkeeper Magdalena Lekovska guessed the right way and hacked the ball to safety. 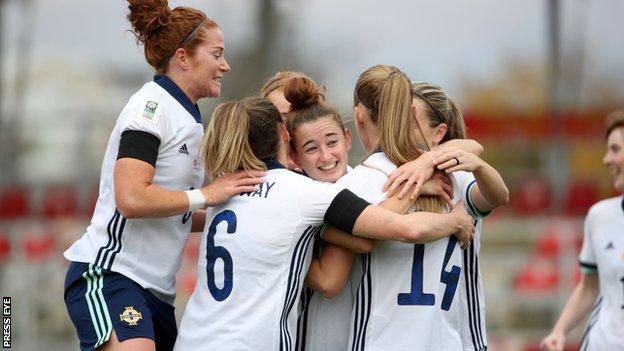 However, Northern Ireland pressure kept building and Wade curled home a delightful fifth when the ball broke to her on the edge of the box, and McGuinness tucked away a sixth from the left when she raced onto Holloway's through-ball.

After setting-up Wade and McGuinness, Birmingham City defender Holloway clocked up a hat-trick of assists when she cut the ball back for Magill to net her second four minutes before half-time.

As poor as the hosts were, it was a brilliant first-half showing from Northern Ireland and, by far, their most ruthless 45 minutes under Shiels.

Shiels made two changes at the break, handing Rachel McLaren a debut in place of her booked Crusaders team-mate Julie Nelson while captain Callaghan was replaced by Chloe McCarron.

Naturally, while Northern Ireland continued their possession play, the second-half lacked the same relentless energy of the first, although Wade hit the bar from 20 yards.

Furness saw a powerful 30-yard drive tipped onto the bar by Lekovska and McKenna, who could have ended the game with a hat-trick, scuffed an effort wide from the edge of the area.

Furness did complete her hat-trick on 68 minutes when she fired past Lekovska from close range, and she was soon joined by the excellent Magill on three goals when the 27-year-old capitalised on a poor goal kick. 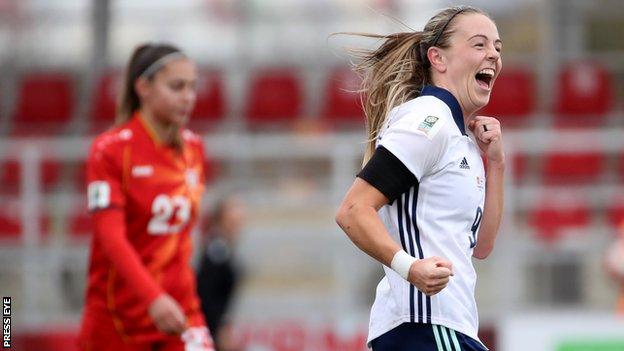 Magill, substitute Kelsie Burrows and Wade missed good opportunities to reach double figures, while Nadene Caldwell forced a superb save from Lekovska with eight minutes left after skipping into the area.

The pressure finally told as Magill lobbed Lekovska for her fourth before Holloway added a goal to her hat-trick of assists when she converted from close range in injury time and completed NI's landmark victory in fine fashion.

The teams play the reverse fixture in Belfast on Monday and Shiels will be hoping his players can repeat the performance in front of a sold-out Seaview - and end a historic year on a high before the build-up to the Euro 2022 finals next summer.

This news item was provided by the BBC Sport - Football website - the original link is: https://www.bbc.co.uk/sport/football/59381707?at_medium=RSS&at_campaign=KARANGA