Alessia Russo: England super sub says she ‘has to be patient’ despite double against NI

Striker Alessia Russo says she has to be patient about getting a chance in the team after scoring twice off the bench in England's 5-0 Euro 2022 win over Northern Ireland in Southampton.

Russo, 23, replaced top scorer Ellen White at half-time and scored with two of her first three touches, a header and a sensational turn and finish.

"Obviously I want to play in every game for England but I know I have to be patient," she told BBC One.

"I enjoy every game for England."

The Manchester United striker, who also scored from the bench in the 8-0 win over Norway, is just the third player to score two or more goals in a Women's Euros game as a substitute.

"To come on and score is great," she said. "I just got in the right place at the right time and was able to put them in the back of the net.

"I should have finished [a third chance] but we will move on to the next game. I've been watching Ian Wright's goals this week and maybe that inspired me. The girls were brilliant in the first half too."

Former England striker and BBC pundit Wright, who gave Russo advice this week, said: "I'd love to head the ball as well as she can. I just told her with all the players we have around her, stay in there. Don't be in a hurry to come out of the box. Stay in between defenders and crosses will come in." 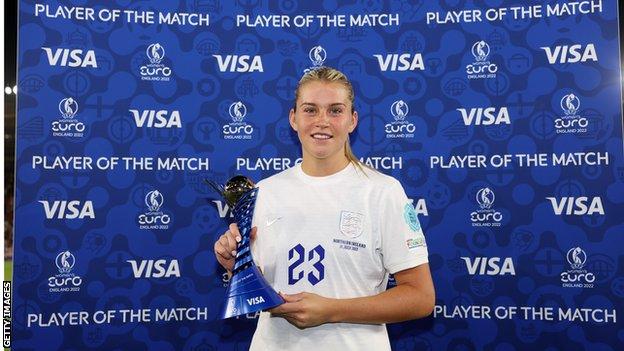 Alessia Russo was named the Uefa player of the match

Russo has now scored seven goals in 10 games for England - but will struggle to dislodge 52-goal White from the team for Wednesday's quarter-final against opposition yet to be confirmed.

"I know that sounds bizarre when she came off the bench at half-time and scored two and should've scored more. It's a quarter-final, likely to be against Spain, let's not jump the gun.

"Ellen White is starting for England and leading that line on Wednesday night, I can assure you."

"I think it's something Wiegman has done well," she said on the BBC. "She has given them opportunities but she's saying you take your opportunity whenever we give it to you. She's injected patience into them. They know they can come on and make an impact."

"It's the link-up play between Russo and Ella Toone - they play with each other week in, week out with Manchester United," she said.

"It's terrific skill [for the fourth goal]. If Russo is scoring goals like this I'm not sure she'll be happy just sitting on the bench now. She's going to be knocking on the door - right now maybe she should be starting. Alessia Russo has everything - she's strong, can hold the ball up and make runs in behind, she's quick and she's good in the air."

This news item was provided by the BBC Sport - Football website - the original link is: https://www.bbc.co.uk/sport/football/62185131?at_medium=RSS&at_campaign=KARANGA