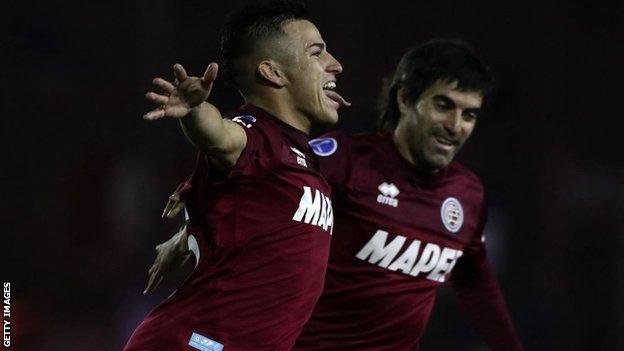 Alexandro Bernabei is the first player from Argentina to join Celtic

Celtic have completed the signing of left-back Alexandro Bernabei from Atletico Lanus on a five-year deal.

The 21-year-old Argentine has been capped at under-23 level and scored five goals in 88 appearances for the Primera Division outfit.

The transfer is subject to international clearance, with no fee disclosed.

In an announcement on social media, Lanus say they have negotiated a 10% share of any future sale.

Bernabei is the first player from Argentina to sign for Celtic and he told the club's TV channel: "I feel grateful to the club for giving me this opportunity.

"I feel proud to be playing in Europe because it was one of my dreams and I'm excited to train with and play with my new team-mates.

"I can't wait to be playing in the Champions League. I've heard that the people are crazy, so I can't wait to sense that feeling and emotion in Celtic Park."

The Scottish Premiership champions have already added goalkeeper Benjamin Siegrist this summer, along with securing a permanent deal for central defender Cameron Carter-Vickers, who spent last season in Glasgow on loan from Tottenham Hotspur.

Meanwhile, Israel midfielder Nir Bitton has signed a two-year contract with Maccabi Tel Aviv, who say there is an extension option, in his homeland's top flight after his summer release by Celtic.

This news item was provided by the BBC Sport - Football website - the original link is: https://www.bbc.co.uk/sport/football/61992476?at_medium=RSS&at_campaign=KARANGA