Armenia 1-4 Scotland: Steve Clarke’s side ease to win over hosts who finish with nine men in Nations League 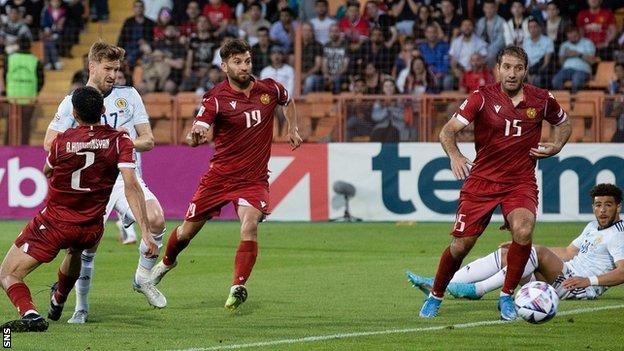 Scotland recovered from a rocky start to revive their Nations League hopes by cruising to victory against hosts Armenia who finished with nine men.

Stuart Armstrong's swift reply was against the run of play, but Arman Hovhannisyan was then shown a red card.

Armstrong supplied another fine finish seconds later and John McGinn and Che Adams added to home misery before Kamo Hovhannisyan was sent off late on.

The victory eases any pressure on head coach Steve Clarke as his Scotland side end the first batch of Group B1 games a point behind Ukraine and two ahead of Republic of Ireland after their two main rivals drew 1-1 in the later kick-off in Lodz, Poland.

It was supposed to be the icing on the cake, a routine Nations League win that would send the Tartan Army on their way to a summer rest with a long-awaited return to the World Cup finals secured for the end of the year.

Instead, it was a desperate attempt to save face after a dismal World Cup play-off defeat by Ukraine in front of their own fans and an even more painful Nations League loss in Dublin.

While insisting there was no more pressure on this game than any other, Clarke had admitted it was now a case of must-win in order to go into September's final three games with a realistic chance of topping the group.

Shorn of captain Andy Robertson and Scott McKenna through injury, Clarke was forced to play Jack Hendry - usually deployed on the right - on the left side of a three-man central defence and the new backline were badly exposed after only six minutes.

Having seemingly targeted their home games as higher priorities, Armenia head coach Joaquin Caparros had brought six key players back into the fray after Saturday's 3-0 loss to Ukraine in Lodz.

Scotland took only eight minutes to respond as Adams' failed attempt at an overhead kick fell into the path of Southampton team-mate Armstrong and the midfielder side-footed home from 12 yards.

However, balls over the visiting defence continued to have Clarke's side all at sea and midfielder Khoren Bayramyan had a shot in the net only to be correctly penalised for offside before Barseghyan looked to have foxed goalkeeper Craig Gordon and Hendry until the defender's desperate outstretched leg hacked clear.

The momentum changed when defender Arman Hovhannisyan lunged into a challenge on Nathan Patterson before aggressively going head-to-head with McGinn after being shown the first of two quick-fire yellow cards.

Moments later, Armstrong justified being handed a start with clever, penalty-box footwork and a shot on the slide into the corner of the net.

It was one-way traffic after the break against increasingly demoralised Armenia, who had been looking for a third straight home win.

Stand-in captain McGinn scored on the turn and, when Adams bent a shot past goalkeeper David Yurchenko after a quick break, the game was finished as a contest before the hour.

There was still time for a few more nervous moments for the visiting defence and for substitute Kamo Hovhannisyan to be shown a straight red for a poor challenge on Lewis Ferguson.

Man of the match - Stuart Armstrong

What did we learn?

Scotland boss Clarke would have settled for any kind of win, so to secure the three points with a handsome victory will be viewed as a bonus that has steadied a rocky ship.

However, it still will not mask the defensive fragility exposed by a side 53 places below Scotland in the world rankings until the hosts crumbled through their lack of discipline.

Scotland's three-man central defence was again breached far too easily, with none of the starters making a case for regular game time, and the midfield once more failed to exert sufficient control of the game.

Armstrong at least can head home having staked his claim for a more regular starting place, while Clarke can point out that the win was achieved despite the absence of captain Robertson and fellow key defender Kieran Tierney.

Scotland host Ukraine on 21 September (19:45) before visiting the group leaders six days later, with the Irish visiting in between on the same night Armenia host Ukraine. 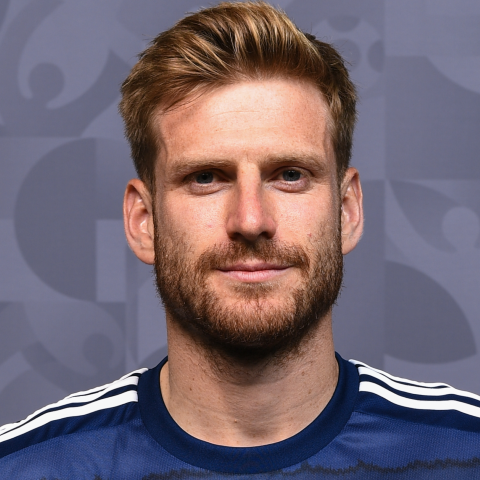 This news item was provided by the BBC Sport - Football website - the original link is: https://www.bbc.co.uk/sport/football/61675624?at_medium=RSS&at_campaign=KARANGA