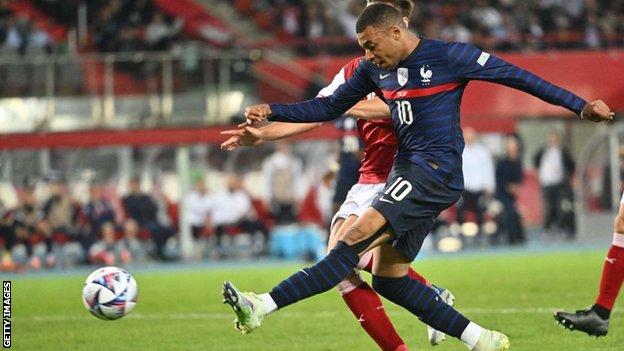 Kylian Mbappe rescued France a point in Austria as the world champions remain winless in the Nations League.

Mbappe, on as a second-half substitute, finished smartly after a lightning break from the visitors led to the equaliser on 83 minutes.

France have just two points from three Group A1 games.

It could have been worse, after Weimann, who scored 22 Championship goals this season, turned home a low cross before the break.

Karim Benzema went close for France either side of the break but it took Mbappe's introduction to finally break the resistance of Ralf Rangnick's Austria.

The Paris St-Germain striker combined with RB Leipzig's Christopher Nkunku to convert the equaliser just when it looked as though their pressure would not pay off.

France still have a mountain to climb to reach next year's Nations League finals having previously thrown away two leads in five days, in a loss to Denmark and draw with Croatia.

Elsewhere in the group, Croatia got their first win of the campaign, winning 1-0 at group leaders Denmark.

This news item was provided by the BBC Sport - Football website - the original link is: https://www.bbc.co.uk/sport/football/61766082?at_medium=RSS&at_campaign=KARANGA