BBC pundits predict Euro 2022: Can England go all the way? 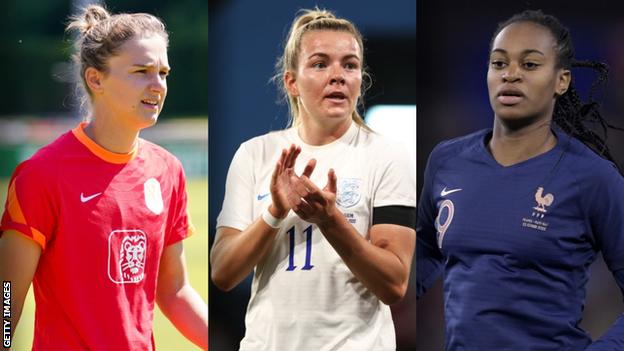 Vivianne Miedema (left), Lauren Hemp (centre) and Marie-Antoinette Katoto (right) are expected to be stars at this summer's tournament

Can the Netherlands defend their European title? Will England win a major tournament on home soil? Can France finally live up to expectations?

Euro 2022 is ready to go - and BBC Sport's pundits predict who will win, who will finish top goalscorer and which team could spring a surprise.

Will England deliver on home soil?

"I think their strength in depth is at a level like never before. Any starting XI from that squad would be a match for most countries and I'm sure Sarina Wiegman will get her selection and tactics right for each match and challenge."

"I honestly believe that England are going to win the Euros. They are on home soil, have talented players and a new manager. I think it's all there for England to win."

"Spain have an excellent team. They have excellent relationships with each other, and a lot of players from Barcelona, who are used to winning a lot of trophies. They were very good in the last World Cup and were unlucky to be knocked out by the USA."

"I can't look beyond England. It's a home tournament and Sarina Wiegman has got them playing mostly how she wants. Player for player, they have top-class options in pretty much every position. There is something special about this group."

"England are in good form, have a fantastic manager and will have the home support. They have just won the Arnold Clark Cup against strong nations, Sarina Wiegman has won the tournament before as Netherlands manager and has certainly changed England's mentality. They have so many young, talented players."

"With striker Ada Hegerberg coming back, it gives Norway those goals and she is a difference-maker. She is a star and can take them over the edge. If they can galvanise themselves, I think they can really go far in this tournament."

"France are my team, my country and they have experienced players as well as young, talented players but England at home are going to be a really good host and team."

"I think the home tournament will bring pressure but may also give them the extra boost needed, especially in the latter stages. England are capable of beating anyone. They have a top manager who knows how to win a home Euros and a competitive squad with a nice balance of exciting, young talent and experience."

What would be considered a success for England?

Alex Scott: "Success for England would be getting to the final and lifting the trophy. There is a huge expectation on them, a huge weight of pressure but the team and those players are used to that now. With the amount of investment and everything else that's gone into the game, they should be winning the tournament."

Willie Kirk: "They have to get to the final to be deemed a success. Wiegman knows the pressure that a home tournament brings and I'm sure the players will thrive under that pressure."

Sue Smith: "England need to go and win something now. We got to the final in 2009. We have gradually improved and we have all the support needed to go and win a tournament."

Fara Williams: "It would be deemed a failure if they don't reach the final. I think they have to. If you want to show progress and the investment, then it's one million per cent a failure if we don't get there."

Gail Redmond: "Winning it has to be deemed a success for England. They have got so close. It's a home tournament so it does bring that pressure but I think the difference is Sarina Wiegman and how she handles that pressure. The tournament won't be won in the first two games but it's what they do after that and she's got the tactical prowess and the know-how to be able to do that."

This news item was provided by the BBC Sport - Football website - the original link is: https://www.bbc.co.uk/sport/football/61820697?at_medium=RSS&at_campaign=KARANGA