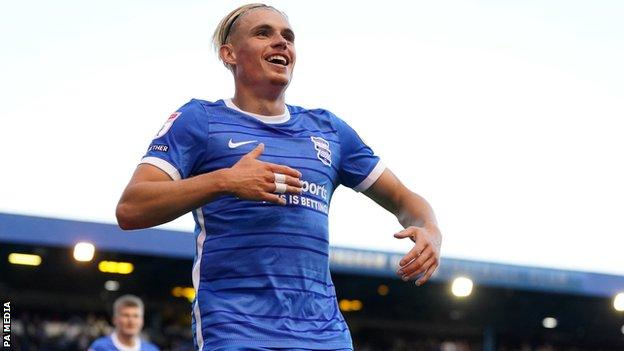 Przemyslaw Placheta's goal was only his second in English football

Striker Hogan put the hosts ahead after five minutes with a superb diving header from Juninho Bacuna's cross.

And Polish winger Placheta scored just before the interval - his first goal since arriving on loan from Norwich last month.

Danny Ward pulled one back in the second half but the visitors were unable to find an equaliser.

It has been a tough summer for the Yorkshire club, who have also lost key players Harry Toffolo and Lewis O'Brien since their Wembley defeat - both to Forest.

They were disjointed in the opening 45 minutes and the second goal came as a result of some dismal Terriers defending.

After Tom Lees was caught out by a ball over the top, Hogan's cross was overhit but still found both Jordan James and Placheta unmarked at the far post.

James' effort was blocked and Placheta's follow-up was weakly palmed into the net by keeper Lee Nicholls, who should have done better. 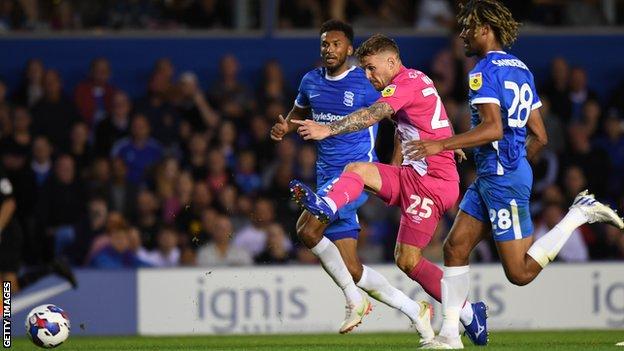 Schofield's side were much better after the restart and reduced the deficit just after the hour mark when a slick move culminated in Sorba Thomas finding Ward, who fired home.

They then put Birmingham under pressure - and had appeals for a late penalty ignored when Jordan Rhodes went down in the box - but Eustace's team held on.

"The commitment of the players was there to be seen. Collectively, they have a point to prove and want to make the fans proud.

"My job is to get the fans and players connected again. And the fans have bought in.

"We wanted a team that are hard to play against. We've already got that - and the football will follow.

"I haven't taken any notice of what's going on off the pitch and neither have the players."

"First half we were off the pace, but we were much improved second half.

"Maybe we deserved something more in the end. The positive rhythm was with us.

"That was definitely encouragement that we can have another positive season. We just need to be more consistent.

"There's been a lot of change at the club and we can't afford to be negative."

This news item was provided by the BBC Sport - Football website - the original link is: https://www.bbc.co.uk/sport/football/62342929?at_medium=RSS&at_campaign=KARANGA