Arnaut Danjuma scored a brilliant first Bournemouth goal to fire his side to a dramatic 3-2 win at home to Blackburn in new manager Jason Tindall's first game in charge.

Danjuma rifled home with a blistering curling shot six minutes from time after Blackburn had twice come from behind at the Vitality Stadium.

Jack Stacey and Jefferson Lerma were also on target for Bournemouth with Bradley Johnson and Adam Armstrong replying for the visitors.

It was Tindall's first competitive match at the helm since replacing long-serving Eddie Howe following Bournemouth's relegation from the Premier League last season.

Stacey brought a poor game to life with a stunning opening goal - his first in Bournemouth colours - in the 25th minute.

There looked little danger when Junior Stanislas rolled the ball into Stacey's path but the wing-back's 25-yard thunderbolt flew in off the inside of the post. 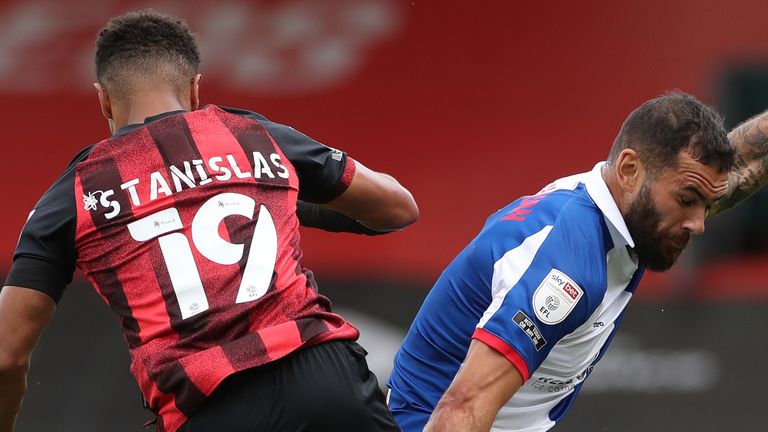 Cherries captain Steve Cook made a brave block to deny Ben Brereton an equaliser after a mazy run from the Blackburn forward.

Bournemouth looked comfortable with their lead until Johnson's speculative 35-yard shot squirmed through the gloves of the hapless Mark Travers to make it 1-1 three minutes before half-time.

The south-coast side were back in front only eight minutes after the re-start courtesy of Lerma's first goal in seven months.

Stacey rolled the ball into the feet of Dominic Solanke, who turned neatly into space and could have shot himself before selflessly teeing up Lerma to side-foot into the corner from the edge of the box.

Blackburn's debutant goalkeeper Thomas Kaminski made a stunning save to deny Bournemouth a third goal by keeping out Solanke's close-range effort from Danjuma's cut-back.

Armstrong drew Tony Mowbray's men level for a second time with 17 minutes remaining, swivelling away from Lloyd Kelly and rifling a left-foot shot into the bottom corner.

Just when it appeared Tindall's reign would get off to a disappointing start, Danjuma picked up the ball on the edge of the penalty area before curling an unstoppable right-foot shot into the top corner.

Bournemouth's Jason Tindall: "There were so many ups and downs and so many mixed emotions throughout the game but I am absolutely delighted to pick up my first three points. I don't want to be conceding three goals every week so we have to get that balance right but we certainly want to score as many goals as we can.

"That will be important if we are to achieve our goals of getting back to the Premier League. Today is a good start but we know there will be other tests to come."

Blackburn's Tony Mowbray: "I genuinely felt there was only one winner once we got back to 2-2 and that was us! It was an intense football match and Bournemouth know they were in a tough game.

"If that is our performance level for the rest of the season, then we should win football matches. We should be proud of the way we played, the chances we created and the threat we carried against a team who have Premier League quality as illustrated by their winning goal."

This news item was provided by the SkySports | News website - the original link is: https://www.skysports.com/football/bmouth-vs-blackburn/report/429707