Cardiff denied Leeds the chance to go back top of the Sky Bet Championship with a 2-0 win on Sunday.

Goals from Junior Hoilett and Robert Glatzel in either half fired the Bluebirds to victory and up to seventh in the table, now level on points with Preston in sixth.

Leeds, meanwhile, who could have gone 10 points clear of Fulham in third with a victory, were left to rue another game where they dominated possession but lacked any real cutting edge. West Brom stay top due to their better goal difference. Cardiff started brightly but Leeds soon took control, and looked comfortable until the 35th minute, when a loose Kalvin Phillips pass allowed Hoilett in to score the first. The Canadian winger still had plenty to do, but charged well from just inside his own half to the edge of the area, before thumping the ball past Illan Meslier. Hoilett then celebrated by holding up a shirt in tribute to Peter Whittingham, the Bluebirds legend who tragically passed away in March.

Leeds continued to dominate and should have levelled in the first minute of first-half stoppage-time. Luke Ayling and Tyler Roberts combined to find Jack Harrison, and his low effort was heading in until it was inadvertently blocked by his own team-mate, Patrick Bamford, who was in an offside position a couple of yards out.

Leeds pushed for an equaliser in the second half but were mostly held at bay. They went close in the 61st minute as Bamford teed up Roberts, but his close-range effort was smothered brilliantly by Alex Smithies in the Cardiff goal. 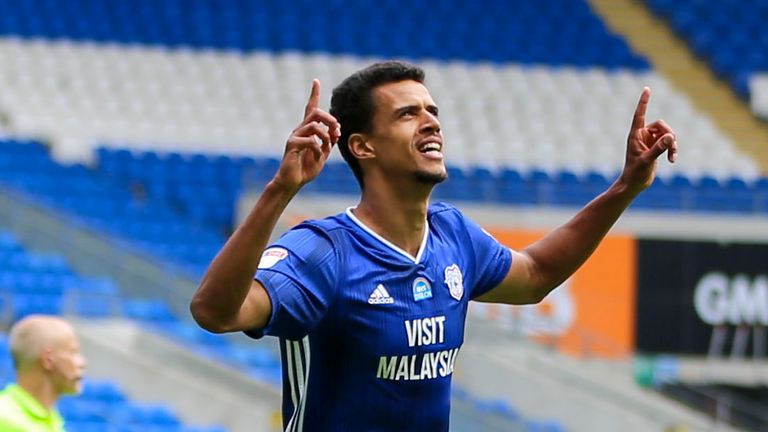 And after 71 minutes Cardiff made them pay as they doubled their advantage. Glatzel had only been on for five minutes when he received a pass from fellow substitute Nathaniel Mendez-Laing, and his sumptuous touch and finish from the edge of the area clipped off the inside of the near post and left Meslier with no chance.

Man of the Match - Alex Smithies

Smithies didn't have a huge number of saves to make, but his control of the box was exceptional. Everything was composed and assured, as he gathered every ball. He also made one brilliant stop to deny a Leeds equaliser in the second half. 3:36 Neil Harris thought Hoilett's tribute to Peter Whittingham was a fitting one

Cardiff's Neil Harris: "It tells us straight away that we're focused and have a hunger and a desire to be successful this season. The players deserve great credit for the way they conducted themselves personally and professionally during the lockdown period.

"I wanted the boys to make a statement in the first game back that we're serious about getting into the top six, and to pay tribute to Peter Whittingham. And there were two goals there that were fitting to that man.

"I didn't know him personally but played against him many times. He came across like a class act, and I thought he could have played in any team in the world he was that good a player. He is loved here and rightly so, and the tribute before the game and with the shirt was fitting." 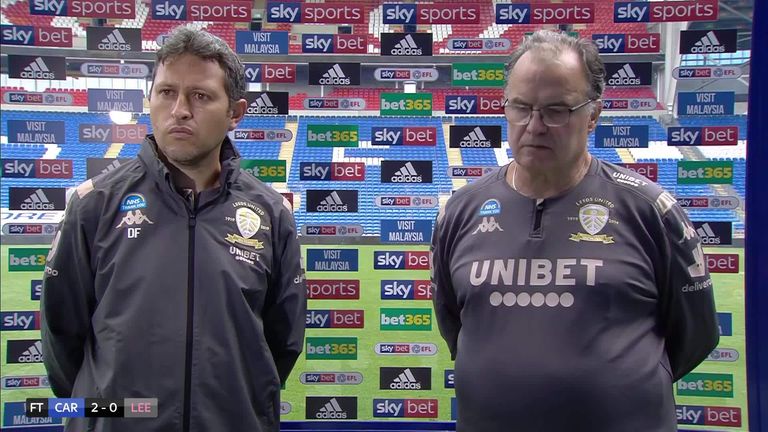 5:21 Marcelo Bielsa felt his side lacked a cutting edge in the final third

Leeds' Marcelo Bielsa: "We should have won. We've created enough chances to score goals and they needed our mistake to score. But we should have been more clinical to finish the attacks.

"The mistakes are part of the game and we can't imagine one player that can't make a mistake. When we have a mistake we have to resolve it between the whole team. In this game they shot twice and scored twice."

Both sides are back in Championship action live on Sky Sports Football on Saturday, June 27. Cardiff head to Preston for a 12.30pm kick-off, and Leeds host Fulham at 3pm. 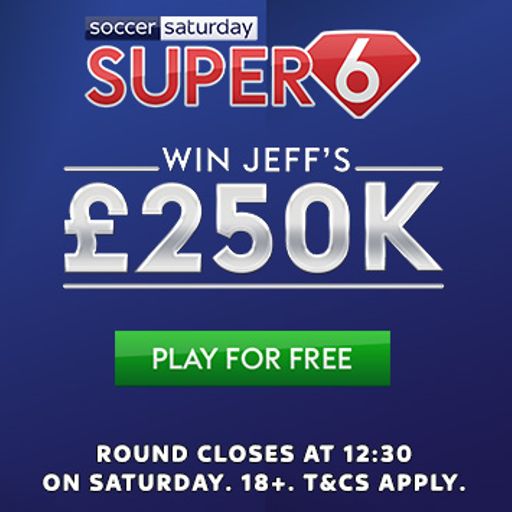 This news item was provided by the SkySports | News website - the original link is: https://www.skysports.com/football/cardiff-vs-leeds/report/409793