A goal from Craig Cathcart earned Watford a slender 1-0 win over Middlesbrough in the opening game of the 2020/21 Championship season.

The winning strike - at an eerily-quiet Vicarage Road - came after 11 minutes when Domingos Quina played a short corner to Ken Sema, whose vicious delivery was headed home by Cathcart from close range.

Boro's Britt Assombalonga came close to levelling the scores on several occasions and the visitors' best opening came when the frontman's curling free-kick was tipped over the bar by Hornets 'keeper Ben Foster.

But a collective defensive effort from the hosts helped nullify the threat of their opponents and start new manager Vladimir Ivic's reign in an ideal manner.

How the Hornets got off to a flying start

A run of six defeats in the final eight Premier League fixtures of last season condemned Watford to relegation and a first Championship season since 2014/15, but there was no sign of malaise as they returned to action under the lights. 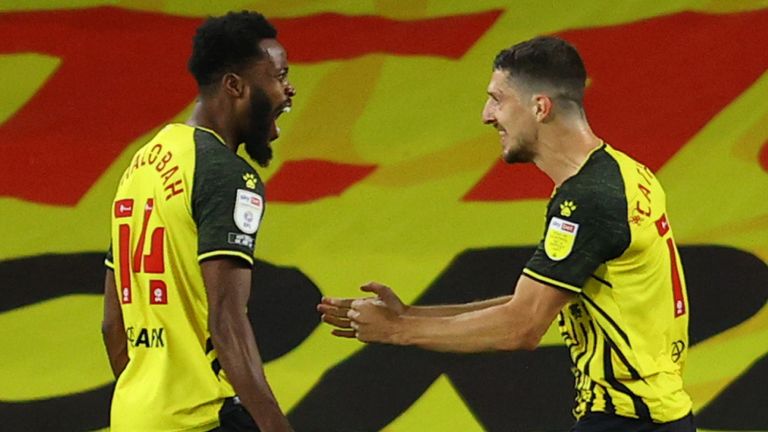 Image: Craig Cathcart celebrates after putting Watford ahead against Middlesbrough

Although new boss Ivic had 11 high-profile absentees for his introduction to English football, personnel issues were quickly shaken off when Cathcart eluded Grant Hall to power a header past Boro debutant 'keeper Marcus Bettinelli after Sema's brilliant delivery from the left.

While they might have felt sorry for themselves in the same situation last term, Boro responded well, with front two Ashley Fletcher and Assombalonga quickly involved in the action. Both proceeded to test Foster with low efforts, although the former England goalkeeper reacted admirably to push them beyond the woodwork.

There was a marked shortage of opportunities for either side after the break. Jeremy Ngakia was almost sent clear by a stunning throughball from Joao Pedro, while Foster saved the aforementioned free-kick from Assombalonga as the half wore on.

It was the same pair who rekindled their battle late on as the Boro striker connected with a teasing free-kick from the left but sent his header narrowly over the top of the crossbar as Foster watched on, on his way to a first clean sheet of the season.

Man of the match - Joao Pedro

The Brazilian prospect does not turn 19 until September 26 but he looked at home in the Championship with some stellar hold-up play and half-chances of his own in a game of few.

Watford match-winner Craig Cathcart on his winning goal in tonight's match, an impressive performance from Joao Pedro and adjusting to life in the Championship.

"I was unbelievably impressed with his all-around game tonight," said co-commentator Don Goodman. "He didn't score tonight but he made a huge contribution in holding the ball up and making dangerous passes for his team-mates." 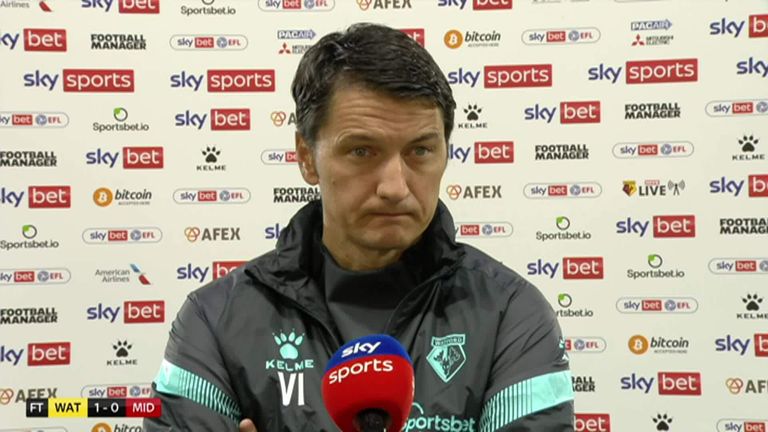 2:56 Vladimir Ivic feels his Watford players need to improve in front of goal if they are to have a successful season

Watford's Vladimir Ivic: "At the end I enjoyed it because we took the points. I can be satisfied with the three points but not exactly with the game, how we played. But it was the first game in the Championship and every first game is different. We have to improve a lot of things in attack.

"Nobody can say we didn't work hard but some things in attack weren't how we practised them and this is something that is in my mind now. It was very important to get the win. After relegation the situation is not good, psychologically, because the players still think about the previous season, but our job is to work with them to forget and to fight now for the next game." 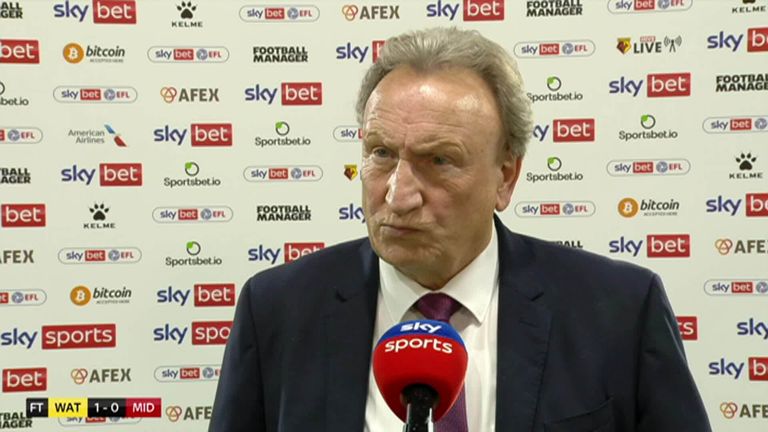 2:28 Neil Warnock felt Watford were fortunate to get all three points as they beat his Middlesbrough side 1-0

Middlesbrough's Neil Warnock: "I thought we did really well and looked a good side. I think Watford were very fortunate to come away with a win, if I'm honest - I don't think our goalie has had a shot to save.

"We're working hard behind the scenes, desperately trying to get strikers in because we haven't really got anything to change. But I can't fault the lads, I thought they did ever so well and if we'd have taken our chances it would have been a different game. It's disappointing but not the end of the world."

Both sides are in Carabao Cup second-round action on Tuesday September 15. Middlesbrough host Barnsley at 6pm, while Watford take on League One Oxford at 7pm.

This news item was provided by the SkySports | News website - the original link is: https://www.skysports.com/football/watford-vs-mboro/report/429715