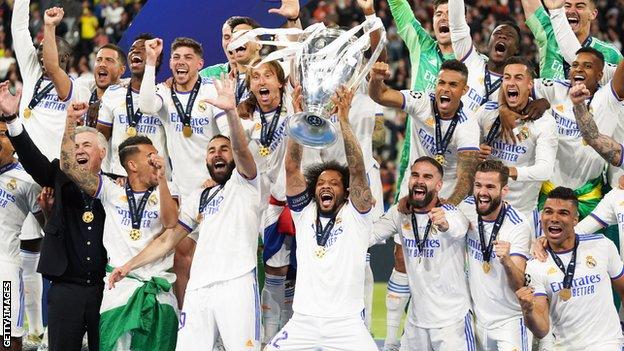 The men's Champions League is to be broadcast on BBC TV for the first time from the 2024-25 season.

Highlights will be shown from 22:00 on the Wednesday of match weeks on BBC TV, BBC iPlayer and the BBC Sport website and app, with clips for online and social media also available.

The three-year deal includes the final, with those highlights to be confirmed.

From the 2024-25 season, viewers will be able to watch highlights of the Premier League, Champions League and FA Cup on the BBC.

The deal was secured as part of Uefa's latest rights auction. The Wednesday highlights include action from all the Champions League games that week, bringing viewers all the goals and unmissable moments.

Elsewhere, Amazon Prime will show live matches for the first time and will get the first pick for Tuesday night games.

BT Sport will retain all the other live games and highlights in the competition's new format.

BBC Director of Sport Barbara Slater said: "We are simply thrilled to have won these rights.

"Our reach and ability to bring people together is unrivalled and we couldn't be more delighted that Uefa has recognised the value in our ability to bring the Uefa Champions League to the widest possible audience across the UK.

"The Uefa Champions League is a wonderful addition to our portfolio of football output on the BBC and we can't wait to get started in 2024."

The Champions League will expand from 32 to 36 teams from the 2024-25 season, with all teams contained in a single table, playing eight games against different opponents.

The top eight will go through to the knockout stage, while those from ninth to 24th will compete in a two-legged play-off to progress.

Real Madrid are the current holders, lifting the trophy for a record-extending 14th time after beating Liverpool 1-0 in the final in Paris last season.

Guy-Laurent Epstein, Uefa marketing director, said: "We are thrilled to be partnering with the BBC in the UK for 2024-2027, as it broadcasts Uefa Champions League Wednesday highlights for the very first time.

"The BBC brand is synonymous with premium sport, and it will apply its extensive expertise in delivering wide-reaching Uefa Champions League coverage for fans in the market."

This news item was provided by the BBC Sport - Football website - the original link is: https://www.bbc.co.uk/sport/football/61995080?at_medium=RSS&at_campaign=KARANGA