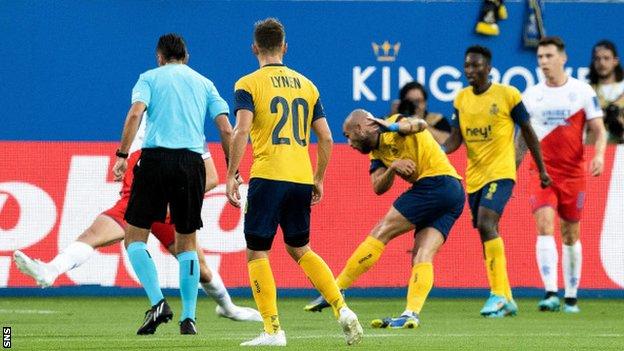 Rangers' Champions League hopes are in the balance after they slipped to a meek defeat to Union Saint-Gilloise.

The visitors' positive start evaporated when Teddy Teuma was allowed too much space in the box to fire the opener.

Then, after a VAR check deemed Connor Goldson had handled in the box, Dante Vanzeir rolled in a second-half penalty to double the Belgian side's lead.

It leaves Rangers with it all to do in the second leg of the third qualifying round tie at Ibrox next Tuesday.

Their deficit could have been higher had it not been for a vital block from goalkeeper Jon McLaughlin to deny Vanzeir when he was through one-on-one, while James Tavernier cleared a header off the line in added time.

Antonio Colak had passed up a glorious chance to equalise at 1-0, but Rangers were a shadow of the side that reached the Europa League final last season.

The winner of the tie will face Monaco or PSV Eindhoven for a place in the group stage, with those sides drawing 1-1 in the first leg in France.

Rangers had settled quickly and tested Anthony Moris twice in the early stages through a Borna Barisic free-kick and long-range drive from James Sands.

However, that was the sum total of the home goalkeeper's work in the opening period.

Union began to find their rhythm and poise midway through the half, and gave Rangers fair warning of what was to come when Simon Adingra drove down the left and put the ball on a plate for Vanzeir only for Sands to pop up with a crucial intervention.

That warning was not heeded, however, as Teuma smashed the ball under McLaughlin via a slight deflection a minute later after Barisic had knocked the ball into his path.

It could have been two before the break, but Tavernier intervened to deny Adingra a tap-in.

Glimpses of the Union goal were infrequent for Rangers, though Colak could have been forgiven for expecting a team-mate to get on the end of the ball he smashed across the six-yard box.

Shortly afterwards came the penalty award and though Rangers felt the VAR-assisted award was harsh, Vanzeir was unperturbed as he rolled it past McLaughlin.

Fortunately for Rangers, McLaughlin was able to get something on the forward's breakaway effort a few minutes later or the tie could be all but over.

Man of the match - Teddy Teuma

Giovanni van Bronckhorst has shown a willingness to adapt his tactics, particularly away from home in Europe, and that flexibility has largely served him and Rangers well.

Playing Sands and John Lundstram either side of Connor Goldson mirrored Union's own defensive set-up and appeared to be designed to allow Rangers to build play from the back, and freeing Barisic and Tavernier a little further up the park.

However, the home side employed an extra man in the middle of the park, outnumbering Glen Kamara and Ryan Jack.

That told, as Union used their stranglehold of the engine room to help dominate play, choking Rangers' attacking ambition.

Rangers are at home in the Scottish Premiership to Kilmarnock on Saturday (15:00 BST), before welcoming Union Saint-Gilloise to Ibrox in the second leg of this tie on Tuesday (19:45).

This news item was provided by the BBC Sport - Football website - the original link is: https://www.bbc.co.uk/sport/football/62377416?at_medium=RSS&at_campaign=KARANGA