Cooper: Forest’s tunnel vision and standing on the shoulders of giants

When Steve Cooper was appointed as Nottingham Forest last September, he arrived with just one initial objective.

To get out of the relegation zone.

The Reds had started the season miserably under Chris Hughton and were sat rock bottom of the Championship table after six defeats from the first seven games. They were 20th after eight games last term, too, and there was no sign of a rare challenge for promotion in sight.

Eight months down the line, Cooper's side are hours away from the play-off final, where they will take on Huddersfield, hoping to regain a place in the Premier League after almost a quarter of a century away. 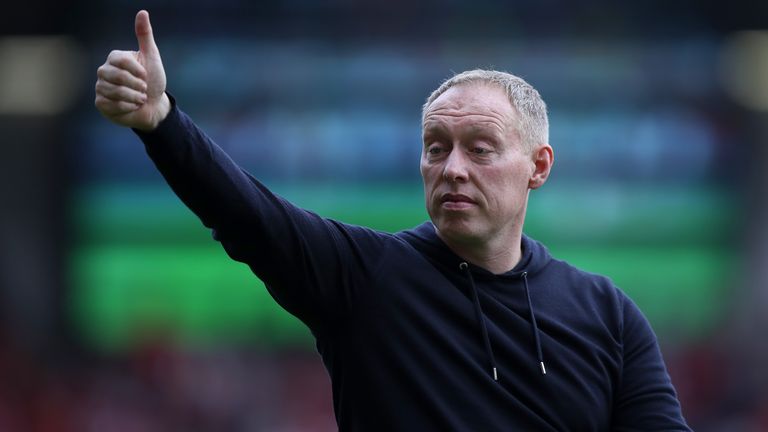 There is no doubting they richly deserve to be in this position. In the 38 league games that followed September 21, no team earned more points than Forest (76), lost fewer games (six) or conceded fewer goals (28). Indeed, only eventual champions Fulham matched their win total (22) and beat their figure of goals scored (66 vs 88).

To transform a team's fortunes as the Welshman has done in such a short space of time is largely unheard of in the Championship, which is, notoriously, one of the most unpredictable divisions.

So how on Earth did he do it?

"It was still fairly early on in the season [when I joined], with seven or eight games gone, so there was still a lot to play for," he tells Sky Sports in an exclusive interview ahead of Sunday's trip to Wembley. Deloitte's Head of Sports Business Group Dan Jones reveals that the Championship Playoff Final is the richest game in football.

"We got a draw here against Millwall then went and beat Barnsley and Birmingham away and we played well. Truth be told, the international break came at a good time because we gave ourselves a chance to get a little bit of work done with the team.

"We have taken it step-by-step. I sometimes get a bit paranoid that the local media have heard me say 'next game' week in, week out, but that's literally what it has been. There have been a couple of times where I have just had a look at the league table and, though we've gone on some really good runs this year, we didn't seem to be going anywhere.

"Post-Christmas, maybe February, March, we did. We kept our form going, then got into the top 10, got in and out of the top six. We knew April was going to be a pivotal month in terms of where we would end up in the league because we had eight games and we managed to win seven and lose one against Luton.

"We were that busy we didn't even think about the play-offs because automatic was in sight, so we didn't have to go through the drama of are we going to get into the play-offs or not; we did that subconsciously while trying to go for automatic."

Owing to Brian Clough's legendary 18-year tenure at the City Ground, which included the European Cup wins of 1978/79 and 1979/80, Forest have been viewed as a sleeping giant ever since their final relegation from the Premier League under Ron Atkinson in 1999. Image: The Welshman took Swansea to the Championship play-offs in both of the last two seasons

Cooper knows all about the history and is hoping to write a new chapter on the banks of the River Trent, taking inspiration from those that came before.

"It is something special. I think this football club is built on successful eras - and not just the trophies and the memories, but the values and the principles of Nottingham Forest. I was very aware of it anyway before I came in because I'm a bit of a football nerd, if you like, and I've watched all of the documentaries on the success and the Brian Clough documentaries etc.

"I have got to know so many of the European Cup-winning team and I'm fascinated by their stories, but probably more fascinated by their love for the club because it's really strong and a lot of them still come to the games, a lot of them are still visible at the training ground now. We meet up with them. Not just them, lots of former players because that's what this club is - you look around and it's build on that.

"Embrace it, be proud of it, represent it well, but at the same time, be really clear that we want to create a positive next step as well."

Above all, he wants to restore pride for the long-suffering fans.

"I cannot think of a game where there has been a spare seat in the Forest allocation. I've been very clear throughout the season to the team and even the local media that our job is to be a team that the club can be proud of. If we want the support that we want - everyone wants to be well-supported - then you have to play your part as well. Ahead of Sunday's Championship playoff final, Nottingham Forest fans are excited at the prospect of returning to the Premier League for the first time since 1999.

"We've tried to do our bit and the fans have got behind us; we've got to try and build on this amazing connection - particularly at the City Ground - between the supporters. It's a unique atmosphere when the team is playing well and the fans are behind us. But even when you look at the second semi-final when things weren't going completely to plan, the crowd got better and they pulled us through.

"They have been brilliant, the supporters, this year and it has just been a really good example of what this club means to everybody. We have the older generation, with respect, that have seen the good times and a lot of young faces watching the team who are really buying into the club - and then everyone in between that.

"It's nice to see all generations of supporters and diversity that are really getting behind the football club. We've got to continue, if we can, to do our best, commit to how we play and, hopefully, all of that stuff will keep growing.

"The more supporters say positive things, the more paranoid I get about not letting people down. And not letting anybody down is just being 100 per cent focused on trying to help the team be ready for the next game and grow our way of working. Everything we do is for the supporters and, if we keep this connection going, it gives us a real chance."

So narrow is his focus that he is unlikely to reference it himself, but it will be natural that Cooper will want to set his own play-off record straight on Sunday.

Over the past two seasons - his first two in senior management - Cooper took Swansea to the Championship play-offs. In 2020, his side were beaten 3-2 on aggregate by Brentford in the semi-finals and in 2021, they were beaten 2-0 by the Bees in the final at Wembley.

Due to Covid limiting attendances in both, this will be first in front of a capacity crowd and a whole different kettle of fish.

"All you can do is draw back on some of the big games you've played - and we've had lots of big games here this season," he says.

"I personally have been involved in some big games with Swansea [as well as] World Cup finals and European Championship finals [with England youth teams]. You have to draw back and ask the players and staff to draw back on their experiences as well and ask what went well, what could we have done better and then try and build it into what we are doing here now, how we are as a group and try and be the best version of us at Wembley.

"I don't think there's a secret sauce or a complete science to taking experience and ensuring it works; I think it's just trying to go off your gut feeling and sticking to the plan of what you believe in and seeing where it takes you.

"What I really want them to do is really hone in on what it has taken to get us to this place and just try and repeat and try not to get too caught up in the magnitude of the game, the event that Wembley gives you, the amount of people that are there.

"It's hard, I guess. When it comes to it, if we want to succeed, we have to hone in on what we are in control of and that's our performance."

This news item was provided by the SkySports | News website - the original link is: https://www.skysports.com/football/news/11688/12621915/steve-cooper-interview-nottingham-forests-tunnel-vision-and-standing-on-the-shoulders-of-giants

CategoryNews Story Premier League
‘I had it all agreed’ Sadio Mane reveals that he nearly signed for Manchester United before Liverpool switch
Liverpool v Real Madrid: Mohamed Salah out for revenge in Champions League final