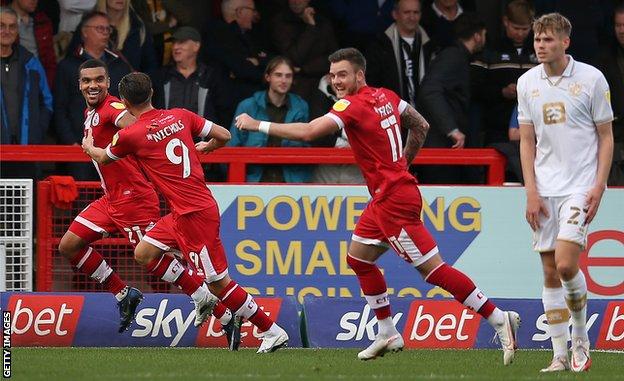 They describe themselves as "the internet's football team" and have ambitions to reach the Premier League by reinventing what they call the "broken", "legacy" model of club management.

Wagmi United, the American consortium who recently purchased League Two Crawley Town, are nothing if not storytellers.

Even their name reads like a manifesto. Wagmi is an acronym for 'We're All Going to Make it', an aspirational rallying cry familiar to cryptocurrency communities dreaming of striking it big.

Despite a first attempt to buy their way into English football with fellow fourth-tier side Bradford City failing in December 2021, Crawley's new owners now feel they have everything in place to become the "transformative sports success story of Web 3.0".

For those unfamiliar with the term, 'Web 3.0' is the so-called next generation of the internet which, depending on your perspective, is either a digital revolution driven by community empowerment or a buzzword that if anything might mean a strengthening of the status quo.

Back in April, traditional finance was used to complete Wagmi's purchase of Crawley - a West Sussex club that first entered the Football League in 2011 and has never been higher than the third tier - but what it plans to do next is different: harness the volatile crypto world and build a remote community of fans as it takes a modest team right to the very top.

And things are already changing, as a rookie team of football owners get their experiment under way.

They are behind a series of graphic novels called Punks Comic that are sold in the form of NFTs (non-fungible tokens) - one-of-a-kind digital assets whose existence is made possible by blockchain, the same technology that underpins cryptocurrencies such as Bitcoin.

Pixel Vault has driven about $200m worth of cryptocurrency transactions and in February received a $100m investment from venture capitalist firms.

Perhaps Punks Comic tapped into a global community of interested collectors who bought into its artistic value. Perhaps that value benefited from the hype around trading in NFTs - a highly risky and unregulated market.

For Johnson, it came down to "the narrative".

"We brought in this incredible illustrator who'd worked with DC and Marvel to build out the punks' characters and to depict them in comics and other media," he says.

"That was the genesis of the whole thing."

And he believes a similar mix of storytelling and digital speculation can bring the same success to Crawley Town. 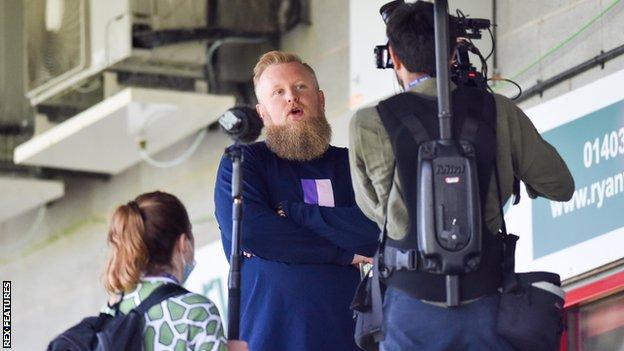 Johnson says Wagmi United want to sell a football club to fans of NFTs, rather than sell NFTs to football fans

On 8 July, Crawley launched sales of their own NFT. For the price of 0.35 Ether [worth £353 at the time of publication] buyers received what Johnson calls "a virtual season ticket".

It includes a range of benefits. Some of these mirror other clubs' equivalent digital subscriptions (which are typically not sold as NFTs) such as access to exclusive content, including interviews with players behind the scenes. Others are more unique, such as the promise of "special input and voting on the future".

An example of what this means in practice comes on Friday, with NFT-holders able to vote on whether the team should strengthen in attack, midfield or defence. The club's season ticket-holders are invited to take part too. And Johnson's own role - plus that of fellow co-chairman Eben Smith - will be subject to vote if they haven't won promotion in two seasons.

By Thursday night they had sold just under 10,000, representing a total value of about £3.5m.

It is a significant figure for a League Two side, plus the club will receive further revenue via a 7.5% royalty fee if NFT owners decide to sell them on.

When Liverpool partnered with auction house Sotheby's in March to sell NFTs - images based on manager Jurgen Klopp and first-team players priced from £57 - only 5.7% were bought. Still, the 9,721 sales earned the club a reported £1.1m, with £281,000 said to have been donated to its charitable foundation.

In an interview with the Independent last month, Johnson said Wagmi's venture should be seen differently; that it was selling a football club to fans of NFTs rather than NFTs to football fans.

His hope is that what he calls the "Web 3.0 crypto audience" - who believe blockchain technology can be used to fundamentally change the way we use the internet, decentralising power from the tech giants - will appreciate their ambitions and want to play a part in what happens next.

This is the crucial part of Wagmi United's plan: to foster a remote community of new supporters around the club, to attract an audience willing to invest in their story.

"A lot of NFT projects are just speculation with no real tangible spine, no real true story," Johnson says.

"Having a football club to root for every week? That's a spine that people attach themselves to.

"If we can bring that to this Web 3.0 crypto audience, especially if we're able to actually achieve promotion and move up the ranks of the English football league, then it's an even bigger story people all around the world can be part of.

"Crawley only had 700 season ticket holders last year. So this is a club that we can embrace as ours, and then help to tell its story. As something that people can connect with on an emotional level. That's important to make any of this really have true success."

It should be said that others have a different take on what Web 3.0 means, including Twitter founder Jack Dorsey, who wrote in December last year that the only people who would truly profit are the "venture capitalists" behind its development, adding: "You don't own 'web3'… it's ultimately a centralized entity with a different label."

It's also worth noting that members of the Wagmi United consortium were able to purchase the club's NFTs themselves, and that data available on trading platform OpenSea shows a large number of buyers have decided to sell it on rather than take up the option to 'burn' it by redeeming offers for Crawley merchandise (doing so renders the NFT untradeable). That would suggest strong interest in speculation, although the NFT's value has dropped from its launch price.

Whether those who purchased Crawley's NFT are more interested in storytelling or risking a shot at quick profit, Johnson and his fellow investors say they are "in it for the long haul".

They represent a range of personalities - "from dreamchasers to seasoned executives" - including YouTube influencer Gary Vaynerchuk, digital artist Snowfro and Daryl Morey, president of the NBA's Philadelphia 76ers.

In the months since the takeover, they have been busy.

First came the signing of a new manager at Crawley, Kevin Betsy. Then a kit and apparel deal with Adidas.

They have also signed a fly-on-the-wall documentary deal with a major streaming platform to record their first year in charge.

On Saturday, they played a friendly at home to Queens Park Rangers and drew 3-3. Web 3.0, NFTs and the blockchain were probably not topics of conversation at Broadfield Stadium.

But there has been plenty of controversy about those subjects elsewhere. 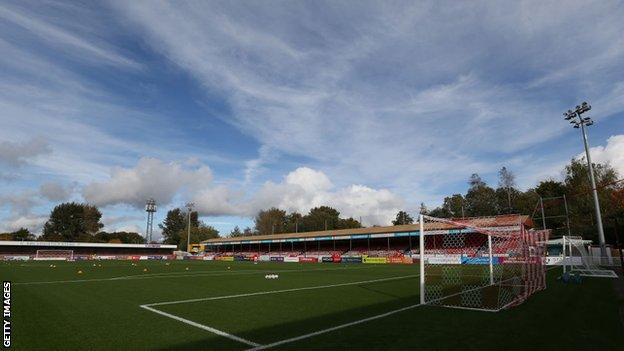 Crawley's Broadfield Stadium has been the club's home since 1997

Firstly there are environmental concerns. Recent research suggests operations required to run the blockchain technology behind NFTs and cryptocurrency use more energy than Argentina.

In November, millions of pounds were invested in a digital token inspired by the popular South Korean Netflix series Squid Game, which was revealed to be a scam when the token's founders made off with the money.

Since the end of 2021, cryptocurrencies have lost 60% of their value, with the crypto industry more widely losing over $2tn of its market cap. In November last year, Crawley's NFT sales would have been worth about £12.3m.

In March 2021, an NFT of Twitter founder Dorsey's first ever tweet was sold for the equivalent of $2.9m (£2.1m). When its owner tried to sell it on this year, the highest offer was worth about 0.2% of what he paid.

In the football world, so-called 'fan-tokens', marketed by clubs to their supporters and sold on the Socios platform, provide another example of the risks behind investing in crypto-assets.

Some of these offer limited real-world perks to the buyer - one offered the chance to vote for songs played at matches. But December 2021 research by crypto-analysts Protos, commissioned by BBC News, found Manchester City and Lazio tokens sold via Socios had dropped in value by 50% and 70% respectively. Another company offering similar services called Iqoniq went into liquidation in January.

When Arsenal allowed three of their players to appear in a promotion for Socios, they were deemed to have "trivialised investment in cryptoassets" and taken "advantage of consumers' inexperience or credulity" by the Advertising Standards Authority. Arsenal said they would seek a review of the ruling.

Socios' partnership with West Ham was dissolved following a backlash from the club's supporters, who argued they were being unfairly "monetised".

One industry insider recently suggested that every single club in the Premier League was considering some form of NFT offering in the near future, predicting that 95% would fail.

He says: "A lot of these NFT projects, it's like anonymous people that who knows what they're doing, and you're just trying to flip an NFT to make money. There are so many projects driven by pure speculation. Not with Crawley Town.

"Even if our NFT prices go to zero, I will know as a buyer the money I spent is helping to sustain a club that I'm rooting for.

"It's going towards the wage bill, towards better infrastructure, to decrease season-ticket pricing for the local community.

"It's like supporting a musician or a band you like, right? Like you buy their album or stream their stuff online or buy a shirt or whatever. Like it goes directly to the artist."

Many clubs, Crawley included, operate at a loss, so it's fair to assume that others will be watching their progress with interest.

Johnson for one is hoping this story has a happy ending. And he points to the 'Savannah Bananas' baseball team as a reason for optimism.

For those not up on their Coastal Plain League hitters of the United States, this is the team from Savannah, Georgia who have amassed 2.8 million followers on TikTok through the virality of their video posts.

That's more than any team in Major League Baseball (MLB) and greater than the LA Dodgers and New York Yankees combined.

By ripping up many of the staid conventions of baseball, creating novelty and entertaining sideshows at every game that translate easily to social media, and by directing players to be expressive and expansive in their play, they've become an internet sensation.

"Ultimately, it doesn't matter whether they win or not - they have no pathway to the MLB. But they still have people that care," Johnson says.

"That content side, that constant narrative - comedic or serious, whatever it may be - when you have remote fans that are trying to engage and be interested, that has to be a part of our story, too.

"We've got to be smart about it. We've got to do something unique and different. But we feel pretty good about where we're at now."

This news item was provided by the BBC Sport - Football website - the original link is: https://www.bbc.co.uk/sport/football/62136553?at_medium=RSS&at_campaign=KARANGA