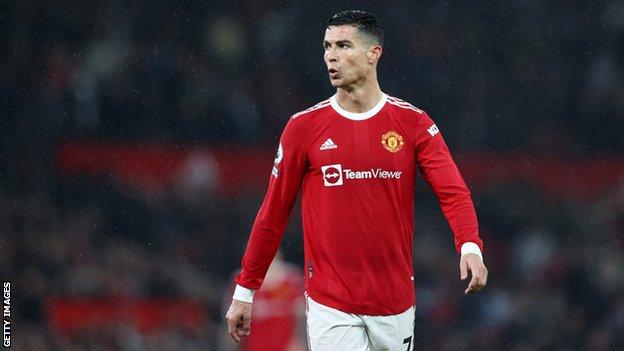 The Portuguese international, 37, wants to leave the club and has been linked with a move to Stamford Bridge.

Manchester United boss Erik ten Hag has also said Ronaldo is "in our plans" and "not for sale".

The forward has yet to join Manchester United's pre-season tour of Asia and Australia because of what Ten Hag called "personal issues".

When BBC Sport asked Tuchel about interest in Ronaldo on Wednesday, he said: "Ronaldo's career speaks for himself. I know there are rumours out there but I will not start speaking about other top clubs' top players."

Chelsea's new owners are understood to be delighted with the recruitment of England international Sterling and consider him to be a marquee signing.

Sterling has linked up with the Chelsea squad in Los Angeles for pre-season.

Tuchel said he hoped Sterling could help "shape" his team and provide leadership to a young attack following the departure of Romelu Lukaku to Inter Milan on loan.

The German coach said Chelsea needed to "work smart and fast" in the transfer market to catch their rivals following sanctions on the club, with Napoli defender Kalidou Koulibaly set to sign a four-year deal and talks held with Manchester City centre-back Nathan Ake.

There have also been links with Paris St-Germain and France centre-back Presnel Kimpembe, who played under Tuchel when he was manager of the French club between 2018 and 2020.

This news item was provided by the BBC Sport - Football website - the original link is: https://www.bbc.co.uk/sport/football/62168558?at_medium=RSS&at_campaign=KARANGA