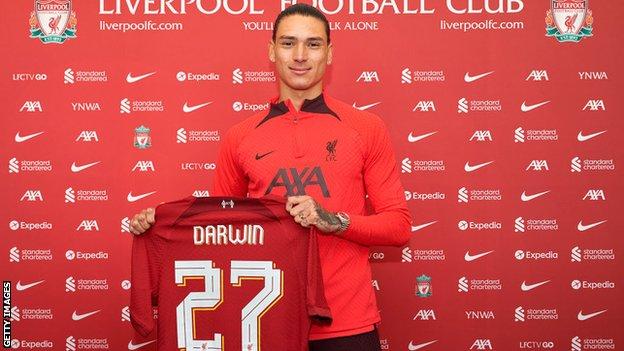 Liverpool have completed the signing of Uruguay striker Darwin Nunez from Portuguese side Benfica on a six-year-deal for an initial £64m.

The 22-year-old could become the club's record signing, with the fee rising to a potential £85m with add-ons.

"I'm really happy and delighted to be here at Liverpool. It's a massive club," he said. "I want to win a lot of trophies at Liverpool."

Nunez added: "I've played against Liverpool and I've seen them in lots of games in the Champions League - and it's my style of play. There are some great players here and I think it's going to suit my style of play here."

Nunez's fee should reach at least £75m if he plays regularly. The add-ons in the deal, which could amount to £21m in total if they are all met, range from how many goals he scores to whether the Reds win the Champions League.

The signing is subject to international clearance and work permit approval.

As well as being the Primeira Liga's top scorer for 2021-22, Nunez also scored six times in 10 Champions League games last season, including against Liverpool in both legs of their quarter-final in April.

"When I arrived at the training ground, I was really surprised to see the set-up and the structure and all the trophies here," said Nunez.

"You can then imagine yourself winning more trophies and then later on when you come here again and see the trophies on display, you can say, 'Look, I was a part of that, I was there at that time, winning trophies.

"That's one of the reasons why I came here to Liverpool - to win trophies and titles."

Liverpool won the Carabao Cup and FA Cup last season, but were runners-up in the Premier League and lost the Champions League final to Real Madrid.

'He is the right fit for us'

Liverpool manager Jurgen Klopp said Nunez is a "wonderful" footballer with "so much potential to get even better".

"That's why it's so exciting. His age, his desire, his hunger to be even better than he currently is and his belief in our project and what we are looking to do as a club," added the German.

"He thinks we suit him and we believe he is the right fit for us - so let's do it."

Klopp, who signed a contract extension with the club earlier this year, believes Nunez has all the attributes Liverpool needed.

"He can set a tempo, he brings energy, he can threaten space from central and wide areas. He is aggressive and dynamic with his movement," said the Reds boss.

"He plays without fear, he's powerful, I know he will excite our supporters."

But Klopp also warned: "It's important we all recognise we are getting a 'work in progress' with Darwin - he recognises that himself. I love how much focus and humility he has.

"We have wonderful attacking options already and he becomes part of that now. So there is no pressure on him at all. He signs for a very long time and we intend to nurture his talent and see it grow."

Premier League rivals Manchester United were also reportedly interested in signing Nunez, who cost Benfica 24m euros (£20.5m) when he signed from Spanish side Almeria in 2020.

Nunez will wear the number 27 shirt as he becomes the third Uruguayan to sign for the Anfield outfit, after Luis Suarez and Sebastian Coates.

Portuguese 19-year-old Fabio Carvalho became Liverpool's first signing of the summer transfer window in May, with the forward set to officially join from Fulham on 1 July.

The Reds have rejected a deal worth £30m from Bayern Munich for Senegal forward Sadio Mane who, like the club's Egyptian star Mohamed Salah, is set to become a free agent next summer if an agreement over a new contract cannot be reached.

Brazil forward Roberto Firmino, another key member of Liverpool's attack during Klopp's tenure, has also entered the final 12 months of his current deal, while Japan international Takumi Minamino is attracting interest from a number of clubs.

This news item was provided by the BBC Sport - Football website - the original link is: https://www.bbc.co.uk/sport/football/61742358?at_medium=RSS&at_campaign=KARANGA