Derby 0-1 Norwich: Canaries on the verge of promotion thanks to Kieran Dowell’s superb free kick

Derby 0-1 Norwich: Canaries on the verge of promotion as Kieran Dowell's superb free kick extends visitors' unbeaten run to 13 league games and keeps Wayne Rooney's side looking over their shoulder

By Lewis Steele For The Mail On Sunday

The Championship promotion battle is a long and trying course but, on Grand National day, Norwich showed exactly why they will easily win the race by a significant number of lengths.

Kieran Dowell’s first-half free-kick was all that separated them and Derby but it was a typical performance for the Daniel Farke-trained Canaries.

They galloped into an early and commanding lead at the front this season, showed the staying pedigree to shirk every challenge along the way and powered down the home straight to all but secure promotion. 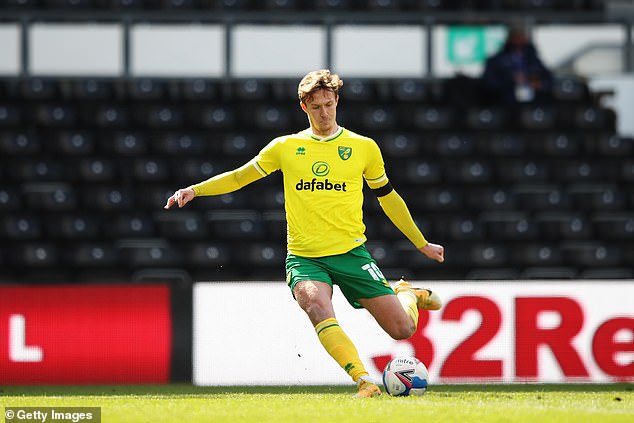 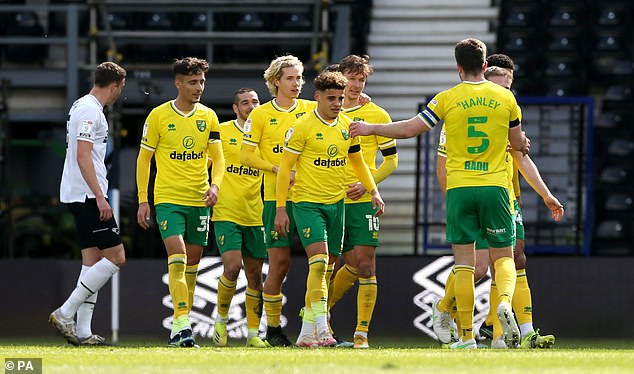 With the chasers also getting wins this weekend, official confirmation of an instant Premier League return will have to wait but it is a mere formality.

The promotion party has long been a matter of when not if and, with pubs reopening this week, the local jaunts in Norwich can put the champagne on ice.

Speaking of champagne, that’s the word Farke uses to describe his side’s style: champagne football. ‘I’m a happy man tonight, it was not magic but it was a hard-fought win,’ said Farke.

His team showed Derby exactly why they are in such command in the table here, with their slick pass-and-move, fluid football in the first-half and a stubborn defensive display in the second. 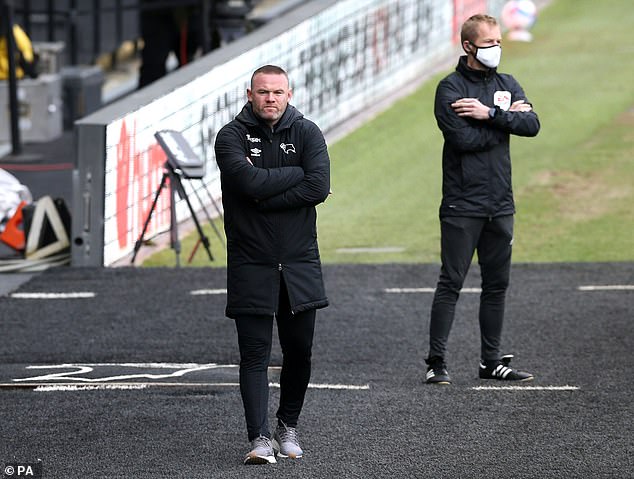 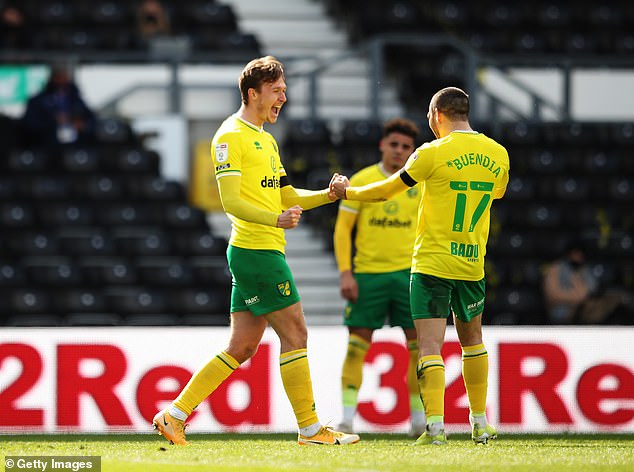 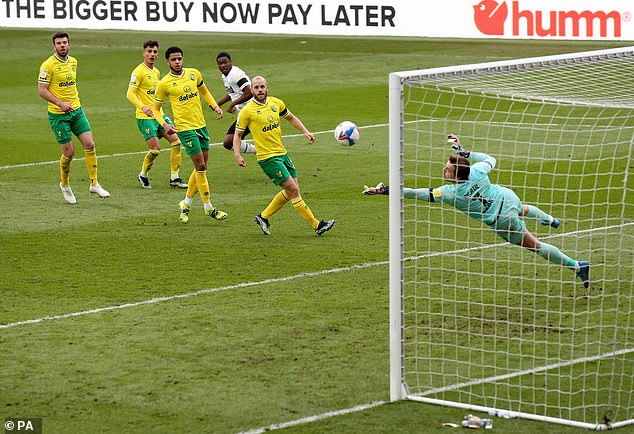 The possession statistic is often meaningless and lacks context but it was telling here. After 15 minutes, Norwich - the away side - boasted a staggering 87 per cent of the ball.

Wayne Rooney’s side were, to put it simply, bullied into submission. Three Derby players were yellow carded inside the opening 20 minutes, all for late challenges possibly borne out of the frustration of chasing Norwich shadows.

And while tactical fouls can be an art form - in hindsight anyway - Derby conceded a number of free-kicks in dangerous areas. Kieran Dowell narrowly missed the target with a set-piece on 10 minutes. Derby were warned.

They didn’t learn, though, and Craig Forsyth gave away another silly foul after a hapless lunge on Todd Cantwell. Kieran Dowell lined it up again, the referee’s white foam still fresh from his last attempt, and did not let up this chance.

It was a third goal in the last five games for Dowell, who has peaked for the home straight of the season after ankle surgery ruled him out of the bulk of the campaign.

The 23-year-old has been like a new signing for Farke - another option to play in the front four and, similar to Cantwell and Emi Buendia, he glides across the pitch and is a constant threat.

‘I am delighted with Kieran,’ added Farke. ‘He’s on the right path. It was a world-class free-kick.’

Farke deserves credit for Dowell’s redemption story. He looked a bit lost after four loan spells away from Everton but seems to have found a home in Norwich.

The quality has always been there - he shone in glimpses for Nottingham Forest and had a good scoring record at Wigan - but Farke seems to have made Dowell into a consistent danger man.

It helps when you play in a side as free-flowing as Norwich, it must be said. The Canaries continued to dominate but could only create half-chances and Derby were very much in the game.

Rooney and his army of coaching staff patrolled the touchline, barking out orders in search of more intensity off the ball and added incentive in possession. 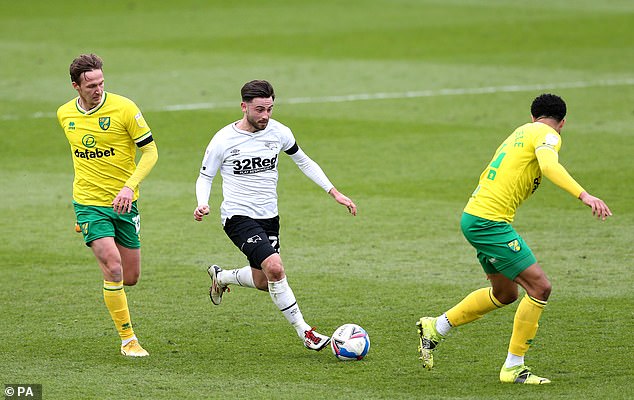 They definitely got a reaction, with the Rams probably the better team in the early phases of the second half. Colin Kazim-Richards and Teden Mengi both forced top saves from Tim Krul.

Patrick Roberts, formerly of Norwich, was particularly influential for Derby. A player similar to Dowell in that he has had a long list of indifferent loan spells and injury woes, Roberts looked extremely confident for Rooney’s men.

And the Manchester City loanee nearly equalised on 74 minutes when he slalomed through several Norwich defenders before Krul smothered the ball.

Krul is another reason Norwich are so far ahead in the table. While the Canaries often blow teams away with their attacking play, as they did against Huddersfield and threatened to do here, they are extremely solid at the back with the World Cup-level experience of Krul behind. 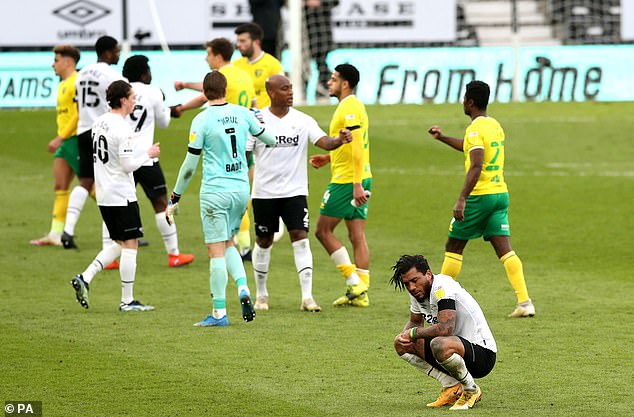 Derby continued to threaten, which is credit to Rooney and his army of coaches - at one time, seven bodies were counted in the technical area. They gave Norwich a few scares and, in the opposite dugout, Farke cut a nervous and frustrated figure.

As good as Krul had been, he nearly gifted a point to Derby in injury time when Kazim-Richards picked his pocket, squared it to Graeme Shinnie who, somehow, shot over.

That’s another of the essential ingredients of a promotion achiever ticked off, then: luck. Norwich needed a bit of good fortune to hang on to the win but it was another accomplished performance and win.

‘We performed very well especially in the second half,’ said Rooney. ‘We deserved a point from the game.’

This news item was provided by the EFL Championship News, Fixtures and Results | Mail Online website - the original link is: https://www.dailymail.co.uk/sport/football/article-9457049/Derby-0-1-Norwich-Canaries-verge-promotion-thanks-Kieran-Dowells-superb-free-kick.html?ns_mchannel=rss&ito=1490&ns_campaign=1490