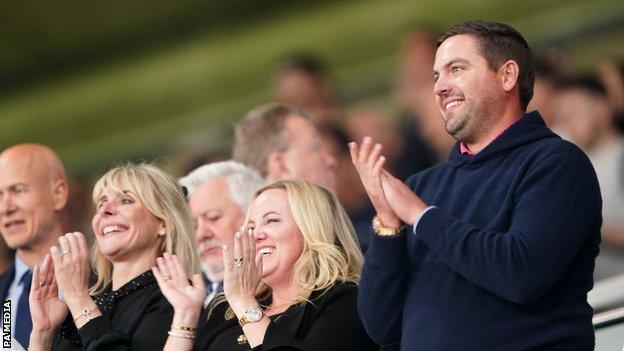 American businessman Chris Kirchner has been given until 17:00 BST on Friday to provide evidence that he can complete the purchase of Derby County.

In the meantime, the club's administrators "have taken the decision to engage with other interested parties as a contingency measure".

The sale and purchase agreement with Kirchner remains in place but will be off if Friday's deadline is not met.

Kirchner was named preferred bidder on 6 April, but has so far failed to complete the deal after twice having his period of exclusivity extended.

On 16 May he exchanged contracts with joint administrators Quantuma. BBC Sport was told Kirchner expected the deal to be done on Thursday.

"At the time there were a number of outstanding issues, which have now been resolved," said a spokesperson for the joint administrators. "However, certain logistical issues mean that completion has still not taken place.

"We are aware that fans and stakeholders are concerned at the lack of official communications. It is, however, not appropriate for us to comment further on the current position as there is commercial confidentiality which needs to be protected.

"We can, however, confirm that there is a real willingness amongst all parties to complete a deal as soon as possible."

Any evidence provided by Kirchner before Friday's deadline would be subject to approval by the English Football League.

"The EFL is incredibly disappointed with this evening's announcement by Derby County's administrators that Chris Kirchner has failed to complete the purchase of the club," read an EFL statement.

"It is imperative that this issue is resolved as a matter of urgency.

"The league will continue to engage with Quantuma as they now hold discussions with third parties and will support as appropriate the club as it seeks to exit administration."

Restrictions placed on the Rams while in administration include a transfer embargo, which has left manager Wayne Rooney unable to sign new players, nor able to offer fresh deals to those he already has.

Just five first-team players - Krystian Bielik, Max Bird, Jason Knight, Louie Sibley and Jack Stretton - have contracts for next season, when Derby will play in the third tier of English football for the first time since 1986.

A milestone year of trouble for Derby

Derby - a club that has celebrated its 50th anniversary of winning the old First Division title for the first time under the late, great Brian Clough in 1972 - have this season been relegated to League One.

A 21-point penalty for going into administration in September and breaching the EFL's financial regulations made Rooney's task of keeping them up a difficult one.

The challenge was further complicated by concerns about the club's ability to stay afloat until the end of the season, with players offloaded to help finance the side's ongoing operations.

If not for the points penalty imposed on them, the Rams would have finished 17th in the Championship table and comfortably avoided the drop.

The job that England and Manchester United's all-time leading goalscorer did with Derby in trying circumstances - in what was also his first full season in management after ending his illustrious playing career last term - saw Rooney linked with jobs at Everton and Burnley this year.

Despite relegation and links to high-profile roles in the Premier League, Rooney had often stated a commitment to remain with Derby, hoping to rebuild the Rams under new ownership.

Efforts to sell the club, however, have been protracted - with former owner Mel Morris first putting it up for sale in 2019.

Failed attempts to offload the club and the "severe impact" of the coronavirus pandemic on its finances were given as reasons for Morris placing the club into administration in September.

Figures from Quantuma last month showed that HM Revenue and Customs' total claim for unpaid taxes has risen to £36m from £28m.

The club also owes finance company MSD £24m, while Quantuma themselves accumulated costs of £2.1m in the first six months of administration.

How did Derby get into this situation?

This news item was provided by the BBC Sport - Football website - the original link is: https://www.bbc.co.uk/sport/football/61731404?at_medium=RSS&at_campaign=KARANGA