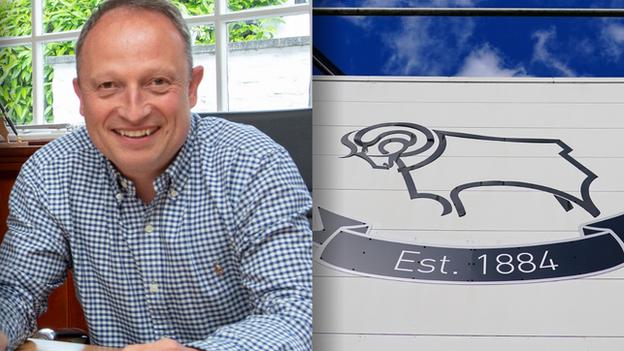 League One club Derby County's takeover by local businessman David Clowes is expected to be completed on Thursday.

The life-long Rams fan already owns the club's Pride Park home ground and has provided Derby with a loan to ensure it can start the upcoming season.

Finalising a deal would end the side's nine months in administration.

A statement "reassured" staff, players and supporters that administrators are in receipt of completion money from Clowes Developments (UK) Ltd.

A spokesman for the administrators added: "The outstanding issues require a short amount of additional time to be finalised.

"All parties involved in the sale of the club have been working very hard together since last weekend to complete this extremely complex transaction.

"A small number of outstanding matters remain, and these matters are outside of the control of the joint administrators and Clowes Developments (UK) Limited.

"It is our expectation that these will be finalised on Thursday 30 June, allowing the transaction to complete then."

Derby's future was plunged into doubt on 13 June when American businessman Chris Kirchner withdrew his bid to buy the club.

Last Friday, manager Wayne Rooney quit with immediate effect stating the club needs to be led by "someone with fresh energy".

On Sunday, local property developer Clowes had his bid to buy Derby accepted, with the news coming shortly after the Rams appointed former defender Liam Rosenior as interim boss.

Derby were relegated from the Championship last season and restrictions due to the financial turmoil means they have just five first-team players on their books.

This news item was provided by the BBC Sport - Football website - the original link is: https://www.bbc.co.uk/sport/football/61989449?at_medium=RSS&at_campaign=KARANGA