Police in Buenos Aires have searched the house and private clinic of Leopoldo Luque as they try to establish if there was negligence in Maradona's treatment following surgery.

The 60-year-old died of a heart attack at his home where he was recuperating.

Dr Luque has not been charged. He denies any wrongdoing.

Maradona had a successful operation on a brain blood clot earlier in November and had been due to be treated for alcohol dependency.

His daughters have pressed for details about their father's medication.

What is the investigation centred on?

Some 30 police officers raided 39-year-old Dr Luque's house on Sunday morning - with another 20 going into his clinic in the capital Buenos Aires. 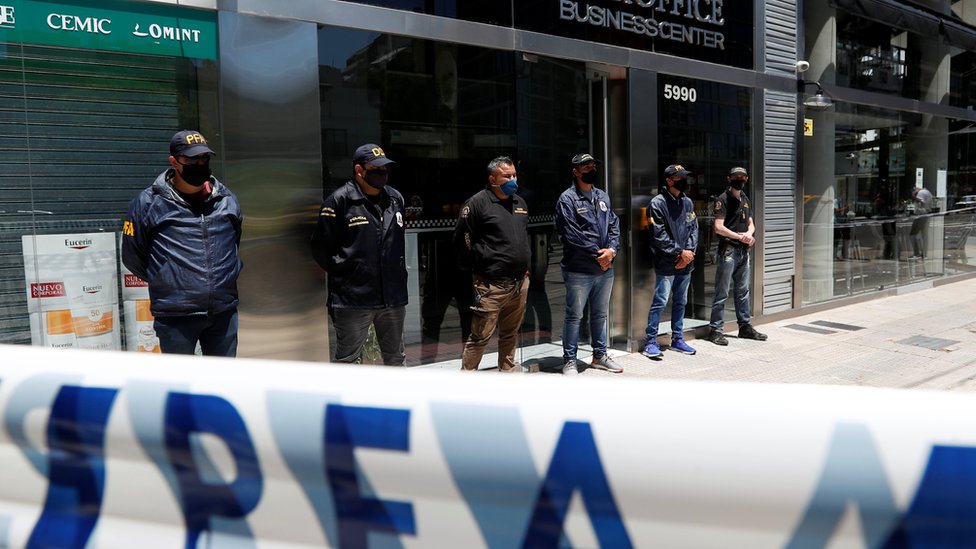 The raids were ordered by prosecutors trying to build a picture of Maradona's last days at home.

There are suspicions that the star's convalescence at home might not have met the conditions of his discharge from the clinic, such as a 24-hour team of nurses "specialised in substance abuse", the on-call presence of doctors and a stand-by ambulance equipped with a defibrillator.

What is Dr Luque's line of defence?

In an emotional press conference on Sunday, Dr Luque - who has been described as the footballer's personal physician - cried, saying he had done all he could to save the life of a friend. He said Maradona had been very sad lately.

The doctor said he had done "everything he could, up to the impossible".

Then addressing some of the concerns authorities are looking into, Dr Luque cast doubt on what his role actually was. ''If you ask me, I'm a neurosurgeon and my job ended. I was done with him," he said referring to November's surgery - and insisting Maradona's convalescence at home was not his responsibility.

media captionDiego Maradona "will live in our heart forever"

"He [Maradona] should have gone to a rehabilitation centre. He didn't want to," Dr Luque said, calling the late star "unmanageable".

He also said he did not know why there was no defibrillator or who was responsible for the fact that there was no ambulance outside Maradona's house.

And he added: Diego "was very sad, he wanted to be alone, and it's not because he didn't love his daughters, his family, or those around him".

Why was Maradona so popular?

Diego Maradona was captain when Argentina won the 1986 World Cup, scoring the famous "Hand of God" goal against England in the quarter-finals.

Maradona played for Barcelona and Napoli during his club career, winning two Serie A titles with the Italian side. He started his career with Argentinos Juniors, also playing for Sevilla, and Boca Juniors and Newell's Old Boys in his homeland.

He scored 34 goals in 91 appearances for Argentina, representing them in four World Cups.

Maradona led his country to the 1990 final in Italy, where they were beaten by West Germany, before captaining them again in the United States in 1994, but was sent home after failing a drugs test for ephedrine.

During the second half of his career, Maradona struggled with cocaine addiction and was banned for 15 months after testing positive for the drug in 1991.

He retired from professional football in 1997, on his 37th birthday, during his second stint at Argentine giants Boca Juniors.

Having briefly managed two sides in Argentina during his playing career, Maradona was appointed head coach of the national team in 2008 and left after the 2010 World Cup, where his side were beaten by Germany in the quarter-finals.

He subsequently managed teams in the United Arab Emirates and Mexico and was in charge of Gimnasia y Esgrima in Argentina's top flight at the time of his death.

This news item was provided by the BBC Sport - Football website - the original link is: http://www.bbc.co.uk/news/world-latin-america-55123188

CategoryPremier League
Tottenham Hotspur manager Jose Mourinho says his side are a pony in a title horse race
Arsenal 1-2 Wolves: Arteta ‘not worried’ about his future despite loss