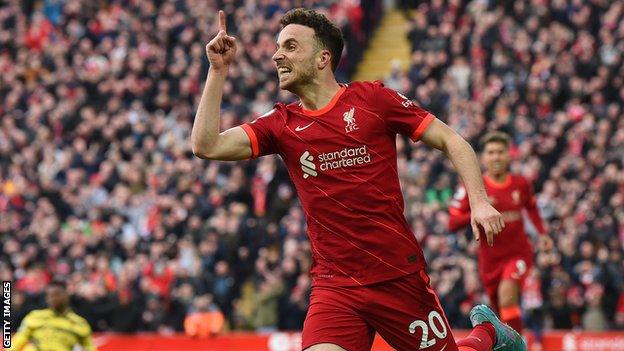 Jota has won 27 caps for Portugal

Liverpool forward Diogo Jota has signed a new contract keeping him at the club until 2027.

He scored 21 goals last season as Liverpool won the FA Cup and EFL Cup and finished as runners-up in the Premier League and Champions League.

"It's obviously from the club's perspective proof of the belief in myself as a player," Jota said.

"Since I arrived two years ago I established myself as an important player in this team - that's what I wanted from the beginning."

Jota, whose current deal was due to expire in 2025, has missed pre-season with a hamstring injury and said he would be out for "a few more weeks".

"When you fight for everything, like we did last year, you just want to do it again and to do it better, because it's possible," he said.

"That drive is in me and I know it's in my team-mates and all the staff. We have everything to fight for those titles out there."

Manager Jurgen Klopp said: "As a striker who can play on the wing, he gives us so many options and since he came to Liverpool he has improved so much.

"I have said before that Diogo is the player we hoped he would be but also a little bit better, so long may this continue."

It has only been two years since Jota joined Liverpool but this deal is a reward for how he has progressed and the impact he has made since signing from Wolves.

Liverpool have not only extended the length of his contract but improved the terms of the deal he was on as a reward and belief in his continuing development.

A player who can operate in a forward role or as a wide attacker, he not only provides goals and assists, but also has the kind of high work rate that manager Jurgen Klopp demands of his players.

Ward has certainly had a busy summer. He played a key role in the club signing Darwin Nunez and Mohamed Salah's contract renewal.

This news item was provided by the BBC Sport - Football website - the original link is: https://www.bbc.co.uk/sport/football/62394172?at_medium=RSS&at_campaign=KARANGA