Glenn Middleton delightfully curled in the only goal with 61 minutes played to give United a slender lead to protect in the Netherlands next Thursday.

Alkmaar came closest to netting when Vangelis Pavlidis was denied late on.

But their opportunities were limited by a home unit that defended with intelligence and calmness, a feat that must be matched when the sides meet for the second leg at AFAS Stadion.

The winner faces Riga FC of Latvia or Portuguese outfit Gil Vicente. Their tie is delicately poised at 1-1 after the opener in Latvia.

Tannadice has not known such European splendour for an age, but this was a night that conjured the spirit of the late, great Jim McLean and the extraordinary conquests of his storied United teams.

The old stadium was a seething mass of orange, barely a seat to be had, and it rocked and juddered as United found their rhythm.

It took them a little while to settle, mind you. Mark Birighitti, their new Australia goalkeeper, twice coughed up possession with loose passes to his full-backs, but AZ Alkmaar were unable to seize upon his slackness.

By that point, United were hitting their straps. Ross' teams are always smartly set up but they began to thread their way through the Alkmaar ranks with neat interplay, Tony Watt bustling down the left and Steven Fletcher, at 35, spearheading the attack with brawn and subtlety.

They fashioned the first effort on target when Craig Sibbald, an astute pick-up from Livingston, danced free on the left angle of the box and lashed a left-foot drive that Hobie Verhulst beat clear.

At the other end, Birighitti smothered from Milos Kerkez and saved comfortably when Mayckel Lahdo angled a header towards goal as the interval loomed.

Four minutes into the new half, Fletcher whirled to meet a dropping ball 10 yards out, but skewed his half-volley wide. The best chance so far.

Alkmaar's primary threat continued to emerge down the flanks. Pavlidis fired a vicious effort across the face from the right, aided by an unseen touch from the flying Birighitti. Kerkez drew another decent stop from the United keeper.

But on the hour, rocking a little from the Alkmaar flurry, the hosts gathered themselves and landed a haymaker.

Middleton collected possession on the right, weaved between two defenders and found Jamie McGrath. The debutant, off the bench a matter of minutes, deftly reversed it back to Middleton.

The winger hoovered up the return ball, shimmied on to his left foot and bent a gorgeous, swerving shot beyond Verhulst from just inside the area. The tangerine sea became a tsunami of euphoric limbs.

There were nervy moments in the final throes, but not many of them. Alkmaar players scurried in behind without the quality to seriously stress the home rearguard.

Bruno Martins Indi let fly after Middleton hacked down Milos Kerkez on the left. Ryan Edwards, rising like a colossus, got his head to the fizzing shot. Birighitti leapt to his left to palm away another Pavlidis piledriver in the last minutes of normal time.

A crucial stop from Birighitti. A towering header from Edwards. A serious scalp for Dundee United. The job is only half done, but on tonight's evidence, this invigorated club can dare to dream.

Man of the match - Tony Watt 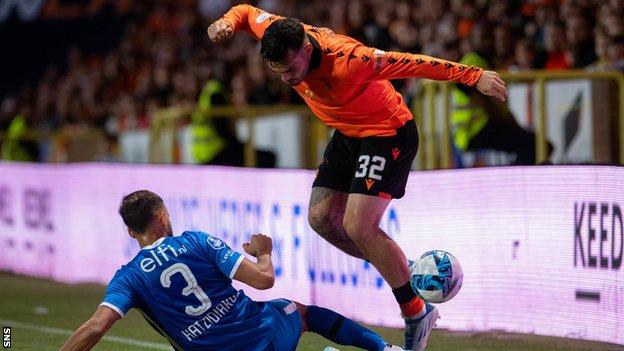 Every man in tangerine was a hero, but Watt deserves recognition for his persistent excellence down the left. His clever footwork, physicality and touches of class earned two Alkmaar men bookings and his side valuable position and opportunities.

This was a hugely compelling European performance from Dundee United in only their second competitive outing of the season.

In the blink of an eye, Ross has taken the foundations laid by Tam Courts and built upon them with canny additions, recruits who have breathed new life into the squad.

The tactical discipline and positional diligence typically evident in Ross teams were there in abundance, but so too was ambition, intricate football, and attacking menace.

Dylan Levitt, back from Manchester United after a fine loan spell, looked sharp. Fletcher and Watt were a mighty handful. Barring the odd Birighitti distribution episode, United were largely unflustered at the back. Edwards and Charlie Mulgrew ruled the Dundonian skies.

What they needed, though, was ruthlessness. A sight of goal, an opportunity grasped. Something to defend and cling to next week when the screws are turned and the pressure mounts.

Dundee United captain Charlie Mulgrew: "Listen, they're a good side and we knew it was going to be difficult at times - but we stuck at it and we got the goal.

"We're thankful for the fans coming out to support us tonight they gave us that extra lift and we are thankful for that but it's only half-time. It'll be a completely different leg away from home."

Dundee United host Livingston in their second Premiership match of the season on Sunday (15:00 BST) before facing AZ in next Thursday's second leg in Alkmaar. (20:00).

This news item was provided by the BBC Sport - Football website - the original link is: https://www.bbc.co.uk/sport/football/62378461?at_medium=RSS&at_campaign=KARANGA