After a whirlwind summer break lasting just 38 days, the English Football League is back.

History makers line up alongside relegation-defying sides in League Two, highly-decorated clubs assemble in League One and old Premier League-winning sparring partners come up against each other in the Championship.

Before an EFL campaign that starts with fans still locked out of stadiums owing to the coronavirus pandemic and clubs teetering on the edge of financial ruin as a result, there is a lot to be braced for in 2020-21.

Five weeks after the 369-day 2019-20 season ended, it all kicks off again with Friday's Championship meeting between relegated Watford and Middlesbrough.

Here are some of the stories, clubs and stars to look out for. 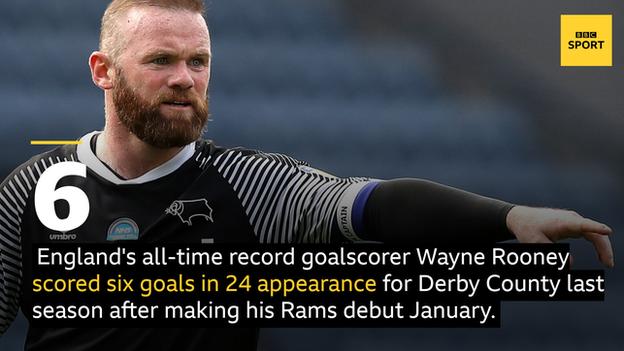 The Championship is never short of star attractions - be it players on their way up, or stepping down a level...

Pukki, who scored 29 Championship goals in 2018-19, is part of a Canaries side that has spent more on transfers over the past few weeks than they did the summer after winning promotion to the Premier League.

The biggest outlay so far has been bringing striker Jordan Hugill to Carrow Road from West Ham in a deal that could be worth £5m.

Bournemouth, relegated along with Norwich and Watford, are yet to make a summer addition but have generated around £80m in sales with Nathan Ake leaving for Manchester City, Callum Wilson heading to Newcastle and Aaron Ramsdale going to Sheffield United.

Brentford, the shrewd operators who have already sold Ollie Watkins to Aston Villa for an initial fee of £28m, have splashed out £5m to get Ivan Toney from Peterborough.

While huge sums are not being paid out in the Championship to bring players in, a number of big names have still made intriguing moves in the division.

Dutch defender Mike te Wierik joins compatriot and Derby County boss Phillip Cocu at Pride Park, with the 28-year-old arriving as a free transfer from Eredivisie club FC Groningen, where he was captain.

Bitter Rams rivals Nottingham Forest, who threw away a play-off place last season, won the race to bring in the prolific Lyle Taylor for free after he left Charlton at the end of his contract, while Jack Colback and Tyler Blackett have also made similar moves from Newcastle and Reading respectively.

Almost five years after the former Chelsea midfielder last came up against Rooney while he was still with Manchester United, the two megastars will be reacquainted in the Championship when Stoke face Derby in December.

After 106 years, Harrogate Town kick off their first English Football League campaign with a trip to Southend United on Saturday.

Their League Two season opener comes just 41 days after they beat Notts County in the National League promotion final at Wembley at the end of a season that was dragged out to 365 days because of the pandemic.

Harrogate boss Simon Weaver simply says "there hasn't been enough hours in the day" to get the Yorkshire club ready for the historic campaign.

There hasn't even been time to ensure they start life in the EFL in their own home town, as work to replace the synthetic pitch at their Wetherby Road ground with grass means the Sulphurites will initially groundshare with Doncaster Rovers 42 miles away.

"Everyone is so excited about this new chapter in the club's history," he told BBC Radio York.

"Everything has been a whirlwind. There has not been much time to reflect on what happened a few weeks ago in terms of promotion.

"But in a way that is a good thing because we have forward momentum, everyone is still buzzing from that high we gained and we are ready and energised.

"You couldn't get through the workload we've had to get through if our heads were in the clouds. We have got to this point because of a good work ethic and because our collective spirit has been fantastic."

Joining them in League Two is Barrow, a club making their Football League return after a 48-year absence having not been relegated in the first place.

The Cumbrian side were cruelly voted out of England's fourth tier in 1972 and fittingly voted back in almost half a century later after the regular National League season was curtailed by the coronavirus pandemic and they were declared champions in June.

Former Blackburn midfielder David Dunn leads them back into the EFL as manager having taken over from Ian Evatt, who left to become Bolton Wanderers boss after guiding the Bluebirds to promotion.

When final places were decided on a points-per-game basis on 9 June, Stevenage were bottom of League Two and effectively relegated.

However, Macclesfield Town - who in the first month of the 2019-20 season won as many games as Stevenage managed in the entire campaign - faced the prospect of a points deduction.

The Silkmen were docked two points by an independent panel 10 days later, but it wasn't enough to send them down in Stevenage's place.

It wasn't until the EFL appealed against the punishment that further points were deducted and Macclesfield were relegated, saving their rivals from Hertfordshire in the process.

So in the space of 63 days Stevenage yo-yoed between life in the National League and League Two, where they stay.

League One of giants

With two FA Cup winners from the past 13 years, as well as a recent FA Cup finalist, a club that spent 16 years in the Premier League and a former Uefa Cup winner in the division, League One shapes up to be one of the toughest competitions to get out of this season.

Coming down from the Championship are Wigan Athletic, FA Cup winners in 2013, Hull City, finalists a year later, and Charlton, who won promotion from League One through the play-offs in 2018-19 in what was Lee Bowyer's first full season in charge.

Portsmouth, FA Cup winners in 2008 and losing finalists in 2010, spend a fourth season in the third tier after failing to get out the division through the play-offs for a second successive year.

Sunderland, who suffered back-to-back relegations from the Premier League and Championship to be dumped into League One in 2018, set off on a third campaign at this level.

Ipswich Town, meanwhile, will be looking to mark 40 years since the late Bobby Robson led them to European glory by getting out of England's third division.

Will doors open to fans?

For the first time since March, fans were allowed through the doors to watch elite competitive football this week.

But just a day after a crowd of 862 were at the Abbey Stadium to watch Cambridge beat Fulham Under-21s in the EFL Trophy in what was the sport's first test event since the coronavirus lockdown, those doors have again shut.

Cambridge United were set to welcome 2,000 fans for Saturday's League Two game with Carlisle but, with crowds now capped at 1,000 following new government advice, spectators will no longer be allowed in.

There had been plans for crowds to attend sporting events in England from 1 October, but increased rates in Covid-19 transmissions will see those plans revised.

In a statement issued on Thursday, the EFL said it was "awaiting further details from government officials" having "proposed that each club should be given the opportunity to stage a pilot on either 19 September or 26 September should they wish".

All that is certain for now is that for the first time in history the season gets started without supporters - the lifeblood of the game as a source of energy, atmosphere and, of course, money - at games.

'A miracle if all clubs survive the season'

No fans in grounds means no major source of income for a majority of EFL clubs.

In May, with leagues halted, EFL chairman Rick Parry warned clubs in the Championship, League One and League Two faced a "£200m blackhole" by September.

As a "worst-case scenario", Huddersfield Town owner Phil Hodgkinson said "50 or 60" could go bust if no fans were allowed in stadiums for the 2020-21 season.

With clubs taking advantage of the government's job retention scheme, and interest-free loans made available through the EFL, no-one has gone out of business yet.

However, Wigan Athletic start the season in administration while Charlton are embroiled in a ownership tug-of-war.

Dr Rob Wilson, a sports finance expert from Sheffield Hallam University, said no-one "should be surprised that there haven't been more cases yet, as there will likely be more unless there is intervention from outside".

Asked if any would feel the financial pinch now that football has resumed for all and players are back from furlough, Wilson said: "Clubs in League One and League Two, in particular, really paused things last season when the seasons stopped.

"The expenditure has now started again and there is no income to support it.

"It would be a sporting miracle if no club goes bust in 2020-21 - it really would be remarkable.

"Further restrictions on fans will hit clubs hard and will require the EFL to provide financial support, which means they will probably look to the Premier League for some help. But the Premier League clubs themselves have their own issues if they can't get fans in."

Premier League chief executive Richard Masters told BBC Sport that it was "absolutely critical" that fans were allowed back inside stadiums as soon as possible, forecasting that failure to do so would cost clubs £700m during the 2020-21 season.

"There will be some pretty major clubs - well-established, historically large clubs - that are playing down in the lower divisions that will really struggle," Wilson said.

"The good news stories will be those who have looked after their budgets properly and are more resilient."

This news item was provided by the BBC Sport - Football website - the original link is: http://www.bbc.co.uk/sport/football/54102505