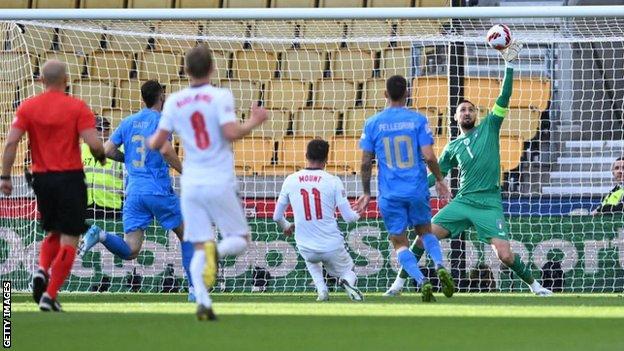 Mason Mount struck the crossbar for England in the first half

England's winless start to their Nations League campaign continued as an experimental Three Lions side failed to break down European champions Italy in a goalless draw at Molineux.

This was a game played behind closed doors as punishment for the chaos that preceded the last meeting between these two, when Italy beat England in the Euro 2020 final at Wembley.

Several thousand excitable schoolchildren in attendance did however provide Gareth Southgate's side a lively backdrop in Wolverhampton and almost got the goal they craved when Mason Mount crashed an effort against the crossbar in the first half.

Raheem Sterling, captain for the evening with Harry Kane among the substitutes, also skewed a glorious opportunity over from close range from Reece James' whipped delivery after the break.

But the hosts also needed goalkeeper Aaron Ramsdale to be alert on several occasions to stop the Azzurri inflicting another defeat on Southgate's outfit, who remain bottom of Group A3 with two points after three games.

England too predictable for organised Italy

This was the third of four games in 11 days for England, after a draw in Germany followed an opening defeat by Hungary, and saw boss Southgate make six changes from that result in Munich.

The packed schedule comes straight after a long domestic season which itself the players had little time to recover for following last summer's delayed Euros, when Southgate's side finished as runners-up to a buoyant Italy outfit.

Despite that, and having taken England to the semi-finals at the 2018 World Cup, Southgate continues to divide opinion - which England manager hasn't? - and perhaps the combination of tired legs and an unfamiliar starting XI caused their lack of cohesion in attack.

The hosts were not adventurous enough, and too predictable, to trouble a well-organised but hardly vintage Italian side as much as they would have liked, with Roberto Mancini's outfit also barely recognisable from their Euros victory last summer.

That said, England will feel they had chances to win the game.

Tammy Abraham, who finished the season with 17 goals in Serie A, was presented a glorious chance when goalkeeper Gianluigi Donnarumma fluffed his pass but Manuel Locatelli's last-ditch challenge threw the forward off his stride as he shaped to shoot.

Mount then fired against the bar after being played in by Sterling, who could only help James' enticing delivery from the right-hand side over the top himself in the second half.

That was the result of a long, patient build-up, but too often England were slow in transition and easy to defend against.

At the other end, Arsenal's Ramsdale, in for Jordan Pickford, did his future with the national team no harm by making several smart stops from a flurry of swift Italy attacks in the first half.

It means England remain without a victory over Italy since 2012, and in a competitive fixture since 1977.

While Italy's last meeting with England saw Mancini's side crowned European champions, the Azzurri were eliminated in World Cup qualifying in a shock play-off semi-final defeat by North Macedonia in March and will not be heading to Qatar later this year.

Their Nations League campaign got off to a more promising start with a draw against Germany and victory over Hungary and they remain unbeaten after a well-earned draw in Wolverhampton, as former Manchester City boss Mancini plots for their long-term future.

Just two of the players who started against England in the final at Wembley last summer began this one, but the visitors still managed to create several decent openings, especially in the first half.

Davide Frattesi missed a huge chance to give them the lead in the opening moments when he slid a low effort beyond the far post, while Ramsdale produced a superb stop to keep out Sandro Tonali.

Ginaluca Scamacca also sliced over from a dangerous position as Italy finished the opening 45 minutes with purpose, but were unable to build on that momentum after the break.

This news item was provided by the BBC Sport - Football website - the original link is: https://www.bbc.co.uk/sport/football/61687945?at_medium=RSS&at_campaign=KARANGA