England 1-0 Austria: Lionesses get off to winning Euro 2022 start

Beth Mead helped England get off to a winning start at Euro 2022 as they beat Austria in front of a record crowd for a European Women's Championship game at Old Trafford.

There was a roar from the majority of the 68,871 in attendance as Mead turned to them passionately with her arms in the air - though, they were made to wait anxiously as there was a VAR check for a possible offside.

The early goal settled England's nerves and they quickly began to dominate in Manchester.

Mead, Georgia Stanway and Kirby offered plenty of creativity and movement in the first half and one criticism may have been England's lack of ruthlessness.

But it was a job well done in the tournament opener and though Manchester United goalkeeper Mary Earps was called into action to deny Barbara Dunst in the second half, Austria were reduced to few clear-cut chances.

The Lionesses, who are in Group A with Austria, Northern Ireland and Norway, are aiming to win their first major tournament - and have started that bid by extending their unbeaten run to 15 matches.

Sarina Wiegman's side face arguably their toughest test of the group stages on Monday when they take on Norway, ranked 11th in the world.

England's task on the opening night was simple: win at all costs.

They did that and though it was not the free-flowing performance Wiegman may have hoped to see, it kickstarted their Euro campaign and gave the home fans at Old Trafford a result they could celebrate.

Fans gathered outside the stadium hours before kick-off, wearing England's new shirt and posing for photographs in front of Old Trafford's famous statues.

Austria's fans also gathered in numbers, chanting and draped in flags as they tried to get in the background of television shots as crews worked outside.

It was a memorable night - not for the performance but for the occasion - and England will hope to gather momentum as they prepare for a tough match on Monday. 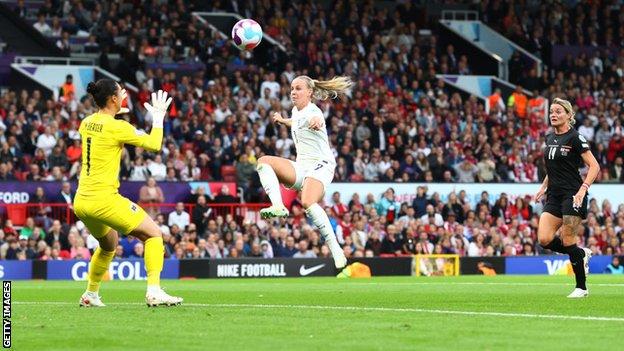 Beth Mead opened the scoring in the 16th minute

Mead is a player for the big stage, so it was no surprise she was the scorer of England's first goal at the Euros.

Taking her tally to 15 goals in 15 appearances for her country since the start of 2021, Mead was one of the standout performers at Old Trafford.

Just three months ago, she scored four goals in a 10-0 thrashing of North Macedonia to take England to within touching distance of qualifying for the World Cup.

She scored twice in Arsenal's win over rivals Chelsea on the opening day of the Women's Super League season last September.

And a 14-minute hat-trick at Wembley helped England to victory over Northern Ireland in October.

With competition for places in the side extremely high - particularly in the attacking positions - Mead continuously gives reasons for Wiegman to select her.

This news item was provided by the BBC Sport - Football website - the original link is: https://www.bbc.co.uk/sport/football/61970367?at_medium=RSS&at_campaign=KARANGA