England v Spain: All you need to know for Euro 2022 quarter-final 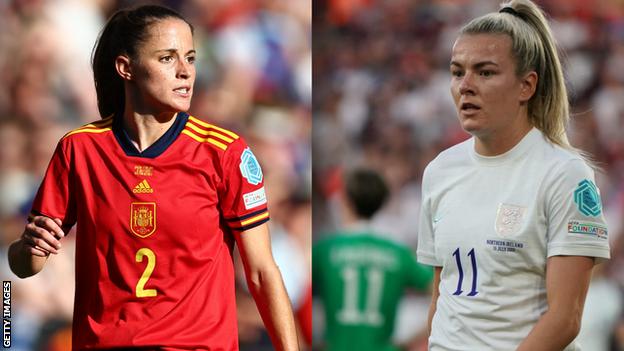 England are preparing for their biggest test of the European Women's Championship when they take on one of the pre-tournament favourites Spain in Wednesday's quarter-final.

Just one place separates the teams in world rankings and expectations for both nations are high.

Spain have a squad packed full of Champions League winners, while England are on a roll and have home advantage in Brighton. With a place in the semi-finals up for grabs, here is everything you need to know.

What form are they in? 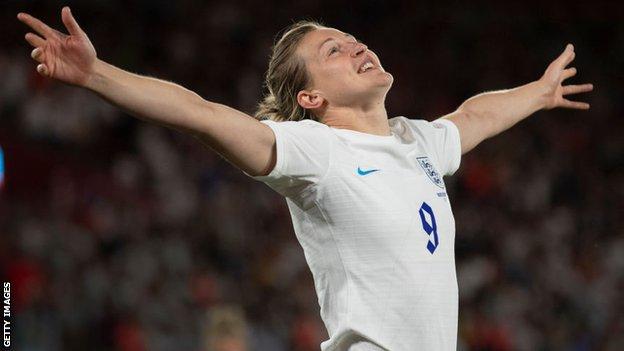 Confidence is sky-high for hosts England, ranked eighth in the world, having gone 17 games unbeaten since Dutchwoman Sarina Wiegman became manager in September.

The Lionesses won all three games in the group stages without conceding a single goal, while the 14 they scored beat the previous tournament record of 11 set by Germany in 2011.

Their 8-0 thrashing of Norway in their second game was also the highest winning margin in the history of the tournament.

"I hope we've done enough in the group stages to interest people and bring them on our journey with us," said England captain Leah Williamson. "I hope they stay with us now and everyone enjoys it."

Spain, ranked seventh in the world, have not quite hit the same heights at this Euros, winning two of their games and finishing second behind a German side who beat them 2-0.

Their two wins in the group weren't without drama either - they conceded within a minute against Finland but bounced back to win 4-1, before needing a 90th-minute winner over Denmark in their final group game.

However, like the Lionesses, the Spanish team are also not used to losing. Their defeat by Germany was their first since March 2020, ending a 24-match unbeaten run.

What test can Spain provide?

Spain are known for their possession-based football and have built their team around a core of Barcelona players who reached successive Champions League finals and dominated their domestic scene.

Everton midfielder Izzy Christiansen described the players as having "an innate ability to keep the ball and dominate possession", but they have struggled to convert that possession into goals.

They controlled 74% of the ball against Denmark on Saturday night, but they only scored once despite having 17 shots. Their tally of five goals in their three group games is fewer than all the quarter-finalists except outsiders Belgium and Austria.

"We know they have a lot of threats but we also know there are a lot of opportunities to exploit them, so we'll definitely try and do that," said England winger Lauren Hemp.

One huge threat missing for Spain is Alexia Putellas - the holder of the Ballon d'Or, which is awarded to the best footballer of the year - who was ruled out on the eve of the tournament after suffering an anterior cruciate ligament injury. 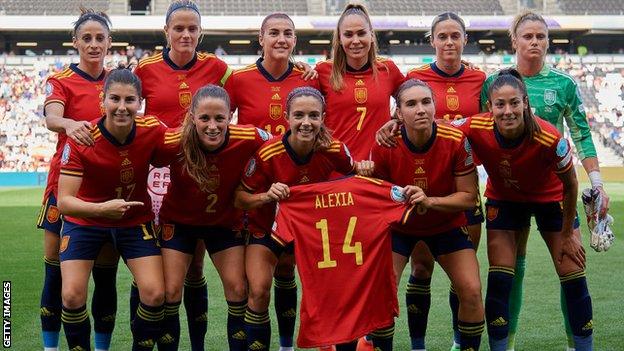 The teams last met at the invitational Arnold Clark Cup, which England also hosted in February, playing out a goalless draw.

That match was the last time England failed to win, having since embarked on a nine-game winning streak, while it was also the only time the Lionesses have failed to score in their 17 games under Wiegman.

England have never lost against Spain when facing them at home, with four wins and three draws, but La Roja were the last team to emerge victorious in a meeting of these sides, winning 1-0 at the SheBelieves Cup in 2020.

So who are the favourites?

Both England and Spain were heavily fancied coming into the tournament, though the hosts' stock has risen following strong performances in the group stages.

After England's 5-0 win over Northern Ireland on Friday, opposition manager Kenny Shiels said it would be a "failure" if Wiegman's side did not go on to win the Euros.

"You talk about pressure all the time and we talk about football. We are just trying to play football at our best and use our strengths to exploit the weaknesses of the opponent," said Wiegman.

"Yes, we know it's the knockout stage but that's the same for the opponent. It's exciting."

The Lionesses have reached the semi-finals at their last three major tournaments, while Spain went out in the quarter-finals of Euro 2017.

"That's where experience becomes invaluable," said Williamson, the England captain. "When you have done something before it definitely makes it easier next time. It is an advantage that we have been in those situations." 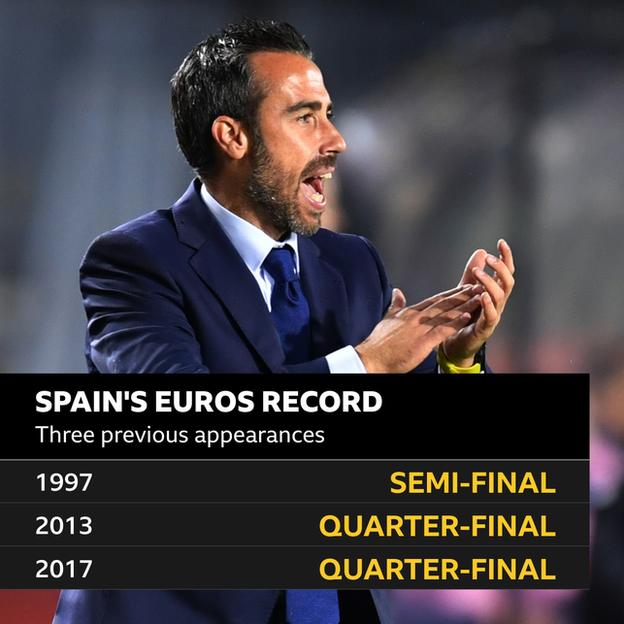 Spain have never reached the final of a major tournament, with their best performance coming in 1997 when they reached the last four.

But given Barcelona's recent success in domestic football - they won their first Women's Champions League title in 2021, before losing to Lyon in the final this year - the expectation on their international players to deliver at the Euros is also high.

Former captain captain Vicky Losada said Spain's performances at the Euros so far had been good but "maybe not as good as we were expecting".

"We're seeing Spain not playing with the same energy, not enjoying the game," she added.

What else is there to look out for?

England could be without manager Wiegman after she tested positive for Covid on Friday morning and missed the victory over Northern Ireland.

She said she was "feeling good and ready to go" on Tuesday but will face a wait to see if she can return.

White, the joint-top scorer at the 2019 World Cup, has taken her overall tally to 52 - one behind Rooney.

However, it is team-mate Beth Mead who leads the Golden Boot race at this tournament with an impressive five goals and two assists in her first three games.

"I know how much it hurt her," said Arsenal team-mate Williamson. "Sometimes you need things to give you a little wake-up call.

"There is now no argument that she deserves her place in this team and that will mean a lot to her."

This news item was provided by the BBC Sport - Football website - the original link is: https://www.bbc.co.uk/sport/football/62217199?at_medium=RSS&at_campaign=KARANGA

CategoryPremier League
Report: Chelsea and Barcelona reach agreement over Cesar Azpilicueta transfer
Euro 2022: What to look out for in the quarter-finals