Last updated on 1 hour ago1 hour ago.From the section Football

English football needs an independent regulator to stop it "lurching from crisis to crisis", says the chair of a fan-led review into the sport.

Former sports minister Tracey Crouch is calling on the government to create a new independent regulator for English football (IREF).

The review says this is necessary for the long-term financial stability of the men's professional game.

"This is a huge opportunity for football," Crouch told BBC Sport.

"We've seen football lurching from crisis to crisis over the past decade and unfortunately we haven't had the right levels of regulation in place to stop that from happening."

BBC Sport understands that Downing Street will support the plan for an independent regulator.

Speaking to BBC sports editor Dan Roan, Crouch added that the recommendations were to remove "vested interests" from football to ensure it can "become sustainable for the long-term future".

The review, which was commissioned by the government, also recommends Premier League clubs paying a "solidarity transfer levy" to further support the football pyramid.

It suggests clubs should have a 'shadow board' of fans so they are properly consulted on key decisions and that supporters hold a 'golden share' to protect their clubs' heritage and which competitions they play in.

The review also proposes new owners' and directors' tests and that these are carried out by IREF instead of the Premier League, English Football League (EFL) and the Football Association (FA).

Crouch said she is "absolutely confident" that such measures would stop any revival of the failed European Super League or a similar breakaway competition and would prevent a club going bust in the manner Bury FC did in 2019.

She added she is "extremely optimistic" the government will support the idea of an independent regulator but said legislation will not be in place by the start of next season.

However, she said a 'shadow regulator' could be set up 'straight away' to establish the guiding principles for IREF.

The Premier League said it recognises the need to "restore and retain" the trust of fans in football governance and that it will study the recommendations before working with the government, fans, FA and EFL on these issues.

The EFL said it hopes the review is a "catalyst for positive change that can make clubs sustainable".

The FA said "many positive changes have already been made", some of which were "directly as a result" of the review.

The Football Supporters' Association (FSA) said the review "lay the basis for a prosperous and sustainable future" for English football at all levels.

What is being recommended?

The report makes 47 recommendations, which are summed up in 10 major points:

The Premier League's owners' and directors' test has come under scrutiny recently following the Saudi Arabian-backed takeover of Newcastle.

Amnesty International has urged the league to change the test to address human rights issues, with the Saudi state accused of human rights abuses.

The Premier League said it has "legally-binding assurances" the Saudi state has no direct control over Newcastle, despite the Public Investment Fund (PIF), which has an 80% stake, being chaired by Crown Prince Mohammed Bin Salman. Western intelligence agencies believe the crown prince approved the 2018 murder of journalist Jamal Khashoggi, which he denies.

The review did not state whether human rights issues would be considered in the new proposed tests but did say owners and directors must be of "good character" to pass.

Crouch said she did not know if the new tests would have blocked the Newcastle takeover but added they would have ensured "greater transparency".

The Premier League and EFL agreed a £250m rescue package for EFL clubs in light of the Covid-19 pandemic in December last year, before the top flight made another £25m available to Leagues One and Two and the National League last week.

The review says the proposed transfer levy will add to that and work in a similar way to stamp duty in order to "distribute revenues across the pyramid and into grassroots".

Crouch said the Premier League "has a duty" to pass more of its wealth down - but that both it and the EFL need to come to a decision on what the levy percentage should be.

If they cannot agree, she said IREF will make the decision on their behalf.

Why did the review take place? 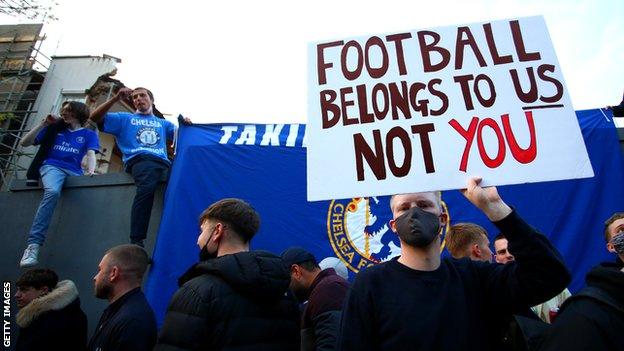 The government promised a fan-led review in its 2019 general election manifesto after Bury were expelled from League One following the collapse of a takeover bid.

The review was brought forward as a result of the Covid-19 pandemic, which caused matches to be held behind closed doors, affecting revenue, and the failed attempt to launch a 12-team European Super League in April.

The review's recommendations seek to address concerns over the financial disparity between the Premier League and the Championship, with clubs in the second tier breaching profitability and sustainability rules in attempts to gain promotion.

This has been apparent this season with Reading deducted six points for breaking financial rules and Derby County docked a further nine points for breaches of EFL accounting rules, taking their overall deductions this season to 21 points.

The European Super League, which involved six Premier League clubs, collapsed amid widespread condemnation from other clubs and players as well as governing bodies, politicians and especially fans.

The review's 'golden share' proposal seeks to prevent this being attempted again as it gives fans a say over a club's heritage - including team colours and their stadium, as well as preventing them from playing in competitions not affiliated to Fifa, Uefa or the FA.

What has been the reaction?

He said there must be "urgent government action" and called on Culture Secretary Nadine Dorries to introduce a football regulator in the next Queen's Speech.

The Premier League said: "We acknowledge the call for some form of independent regulation to protect English football's essential strengths and the Premier League has already undertaken our own governance and strategic reviews.

"These will continue to progress together with the ongoing work of the fan-led review.

"It is important to everyone that any reforms do not damage our game, its competitive balance or the levels of current investment."

EFL chairman Rick Parry said it is "pleasing" to see the review conclude that "additional distributions" from the top flight are required.

He added: "Achieving financial stability has to be the number one priority.

"Reducing volatility and fostering balance throughout the English leagues will provide the bedrock upon which reforms can be built."

Football Supporters' Association chief executive Kevin Miles said the review is "potentially a huge step forward for football governance" and that is "now up to the government to deliver".

And the Manchester United Supporters Trust said the review included a "big missed opportunity" because of its "failure to address the fundamental question of club ownership". The Trust said it "should have recommended measures to allow supporters who wish to invest in their club to do so".

This news item was provided by the BBC Sport - Football website - the original link is: https://www.bbc.co.uk/sport/football/59406087?at_medium=RSS&at_campaign=KARANGA