Estonian Cup: Welcome to the tournament where anything goes

A peak of 113 people watched Rumori's cup defeat by Tallinna Kalev on YouTube, with 52 watching live at the Kotka Staadion

"It would be fairy-tale stuff, like something from Football Manager."

Welcome to the strange world of the Estonian Cup, where senior teams, under-19 sides and Sunday League outfits go head to head.

Some of the teams involved read like names you might see in your local five-a-side league. Here for Beer and Eyjafjallajokull, named after the Icelandic volcano that disrupted flights across Europe in 2010, have played in recent years.

Some of the teams involved are not used to the offside rule because the Rahvaliiga - which translates as the People's League - does not use it. That showed in some of last season's scorelines of 32-0, 26-0, 24-0 and 21-0.

Fifth-tier Rumori Calcio are managed by Englishman Matt Dowling, and Welsh defender Michael Stacey is a stalwart of the team. 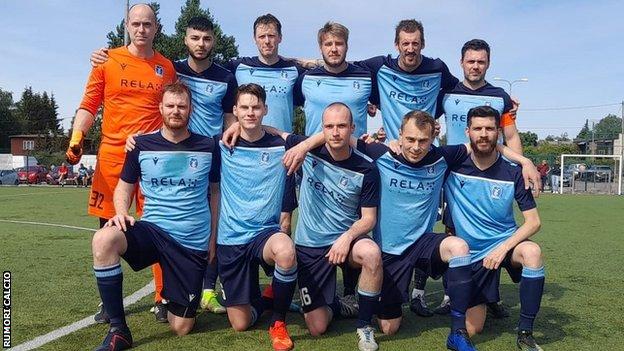 Neither played at any significant level back home - with Stacey at "step nine or 10" as a youngster and Dowling at amateur level.

Both met partners from Estonia in the UK and moved there before finding their way to an 'international football team' named after Rumori di Spogliatoio (changing-room rumours), a blog set up by the club's co-founder Angelo Palmeri.

"I was inspired by another expat team set up by Englishmen in Latvia - Riga United," said Italian Palmeri. "My brother [journalist Tancredi Palmeri] played there. I thought we don't have a team like that in Estonia."

They started in the Rahvaliiga but moved to the regular leagues - and won promotion from the sixth tier last season. "I wouldn't suggest to my worst enemy to watch an 11-a-side game with no offside," Palmeri said.

Rumori drew top-flight Tallinna Kalev in the last 32 this season.

"Most of us would have been working that morning until a few hours before the game," said Dowling, who works in customer support for a rights sharing company.

Stacey, who is a tax professional, and fellow Welshman Dean Scott played the whole game. Dowling was on a four-man bench amid a bit of an injury crisis.

"I really enjoyed the day," said 41-year-old Stacey, who was playing a top-flight team for the first time.

"Some of their guys have got caps and goals for Estonia. It was nice to compare yourself and see how you measure up. I'm far too old now but maybe 25 years ago I could have given them a game.

"I'm 41 and can still do OK. I wouldn't fancy myself going up against Joe Cole for example. But I'd fancy myself against someone who has played for Estonia.

"I don't know if it's being from the UK and the magic of the FA Cup... it's smaller scale but it's a similar thing."

Dowling, 31, said: "All the lower-league teams get knocked out unless a miracle happens. I wanted the experience to test ourselves against a top-level side.

"There were spells where they didn't completely dominate us. It wasn't as if we weren't there. We didn't get battered even if the scoreline suggests differently.

"Our whole team voted Mike as man of the match on our side. If we had 11 of Mike the game might have been different." 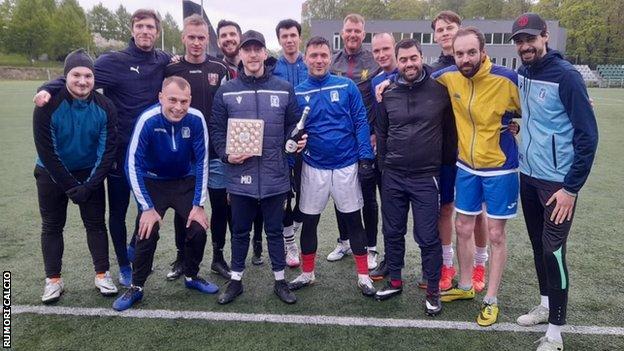 Former Liverpool defender Ragnar Klavan is Kalev's president but in a weird quirk he plays for their top-flight rivals Paide Linnameeskond, the Estonian Cup holders.

"He was at Cagliari. We had a chat. I told him 'OK you play for Paide but afterwards come to play for Rumori'.

"He joked and said 'how much would you pay?'" 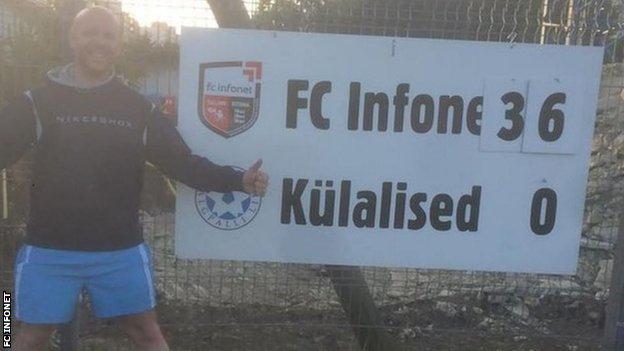 On this occasion in 2015, Infonet scored so many goals some of their name got covered up

There have been some big scorelines in the past, notably in 2015 when FC Infonet hammered Virtsu Jalgpalliklubi 36-0.

Last season Flora Tallinn beat their own under-19 team 14-0.

Three years earlier, they thrashed their under-21s 9-3 in the semi-final. Erik Sorga, who played for both teams that season, scored seven goals.

The cup also supplies tiny teams with a shot at European football. Some start in the last 64, with others - like Rumori this season - getting a bye to the last 32.

In 2014, a team from the third tier called Santos (named after Pele's Brazilian team) from Tartu, lost the final - and qualified for the Europa League because winners Levadia Tallinn were in the Champions League.

Santos lost 13-1 to Tromso on aggregate in their first and last European tie.

"One should always dream of doing big things but there'd have to be a lot of coincidences," said Palmeri of the prospect of Rumori ever going so far.

Dowling said: "You dream about it. We're improving year on year. We were promoted last season and we're doing well this year.

"Maybe we'll grow again and find some new younger players. Who knows what will happen in the future? We hope. We dream."

Stacey said: "It would be fairy-tale stuff, like something from Championship Manager - or Football Manager nowadays - to take a fifth-tier Estonian team to a cup final and go to Europe."

Here in 2015, Raudteetoolised players pose with the scoreboard after they lost a game 31-0

This news item was provided by the BBC Sport - Football website - the original link is: https://www.bbc.co.uk/sport/football/61808907?at_medium=RSS&at_campaign=KARANGA

CategoryPremier League
West Ham and Newcastle set to fight it out for forward ‘one step away’ from Premier League move
Alexandro Bernabei: Left-back joins Celtic from Argentine club Lanus