England have been here plenty of times before - but can they take the next step to reach a women's major tournament final for the first time since 2009?

The Lionesses will compete in a fourth successive semi-final on Tuesday when they face Olympic finalists Sweden (20:00 BST).

Former England goalkeeper Karen Bardsley was involved in their previous defeats in 2015, 2017 and 2019 and she reflects on what happened and the lessons Sarina Wiegman's side can learn from them. 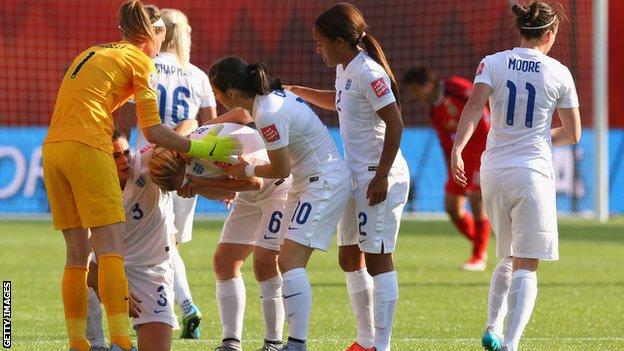 England reached their first World Cup semi-final in 2015, but an own goal from defender Laura Bassett in stoppage time, diverting a cross over Bardsley's head, meant defending champions Japan won 2-1. England had earlier knocked out Norway and hosts Canada.

Bardsley: We started to really believe in ourselves after the last group-stage win over Colombia. We had never won a knockout game before so things felt different, but I felt super confident.

The biggest momentum shift came against Norway. They were riding a wave at the time.

But after that, we were just thinking, 'what's next? Let's go and beat Canada'.

I was nervous because Canada striker Christine Sinclair always had my number - she was like the bogey striker. At 2-0 up I spilled one and she scored and I'll always remember the sound of their crowd. It felt like the noise was in my chest, I had never felt anything like it.

But we hung on and at full-time there was a great sense of relief and excitement. That was when we felt the whole nation back home was starting to sit up and take note. Some of the players would go on social media and see kids trying to get sick notes to stay up late to watch the semi-final and miss school.

We had a belief we would find a way against Japan. Obviously it went down to the last few seconds of that game... and it was just horrible.

Laura Bassett stuck out her foot for a cross and unfortunately it chipped me. I remember turning and sprinting to try to get to the ball. I dived and just watched it cross the line. It was the cruellest way to go out.

Laura had been so good throughout the tournament, you didn't want to see anyone go through that. We tried to protect her as much as we could.

We knew we had the third-fourth place play-off against Germany so we had a meeting the next morning and we needed to make sure we were in the right place mentally. I went to the mall with some of the girls and there was a rollercoaster and waterpark and we just tried to forget it.

We didn't want any regrets against Germany. We wanted to do it for Bassett and we did, winning 1-0. You only learn from those challenging moments. 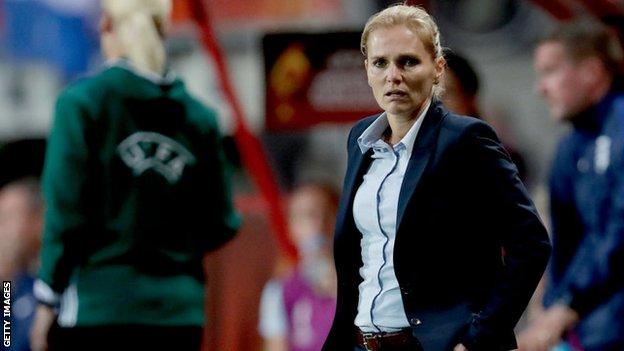 In 2017, England were blown away by hosts the Netherlands and lost 3-0 in the semi-finals. Bardsley broke her leg in the quarter-finals and was forced to miss out. Manager Sarina Wiegman, now in charge of the Lionesses, led the Netherlands to the title in 2017.

Bardsley: The build-up to that semi-final was weird for me. I was devastated, but wanted to be really positive for the team. The preparation felt similar to 2015 but, as soon as the game kicked off, I remember thinking, 'uh-oh, something is not right here'.

It may have been how we set up and perhaps we made the wrong decisions tactically, but it just felt like we were on the back foot straight away.

We thought we could beat the Dutch even though they had this crazy '12th man' vibe. We had the experience of that against Canada in 2015 so it wasn't too much of a shock, but the thing that was different was they had built this unbelievable belief over the tournament. They had this camaraderie and a togetherness which we are now seeing with England.

What we also saw was Wiegman had back-up plans. It was one of those moments where we realised we were perhaps not as well prepared as we thought we were.

There were a lot of individual errors that day and ultimately it came down to squad depth and having tournament experience. I remember the devastation because we genuinely thought we would win that tournament.

In 2015 it felt magical and hope had got us through the tournament, whereas belief got us to the 2017 semi-final and then we were hit with the shock of just not getting it right.

England lost 2-1 to the USA in the last four of the 2019 World Cup as a record peak audience of 11.7 million viewers watched on BBC One. Captain Steph Houghton had an 84th-minute penalty saved, while joint-top scorer Ellen White had a goal ruled out by VAR for offside. Bardsley picked up an injury during the quarter-final and again had to miss out.

Bardsley: There was certainly a different feel to the 2019 tournament back home. You could feel the gap closing between Europe and the United States.

After the SheBelieves Cup was introduced, we became more used to playing those bigger teams. We realised [the USA players] weren't the 'superheroes' we thought they were. We could take them off that pedestal.

It was the first time I felt really confident from the start of the tournament, I felt so prepared. We got through the last-16 tie with Cameroon and I remember everyone celebrating and taking the mickey out of manager Phil Neville's haircut.

In the second half against Norway in the quarter-final I felt my hamstring pop and I knew that was it for me. I remember the day before the semi-finals I had to pretend I was OK in front of the media, so people were still speculating whether I would play. I couldn't kick a ball, but the team preparation was great.

I was actually prepared to come on to do a penalty shootout. I was diving on a crashmat in training to make sure I could do it. I was available to come on for that, which is crazy. So when Steph Houghton went to take her penalty, I was getting ready to come on. Unfortunately she didn't score and we knew that was our chance gone.

All those little moments really matter. In 2015 we knew we needed to work on our belief and mentality. The 2017 defeat taught us about squad depth and after 2019 we knew it was those crucial moments and the level of preparation needed.

They are the biggest lessons I think we learned and have to take into this semi-final against Sweden.

This news item was provided by the BBC Sport - Football website - the original link is: https://www.bbc.co.uk/sport/football/62229282?at_medium=RSS&at_campaign=KARANGA