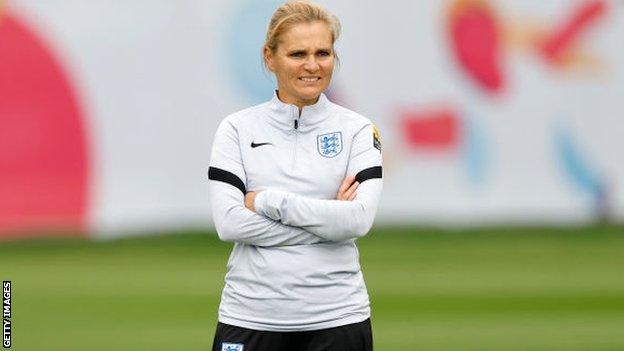 England are unbeaten under Sarina Wiegman since she joined in September

Sarina Wiegman said if England were to win Euro 2022 on Sunday, she might not realise the impact it could have until "probably 15 years later".

The Lionesses will bid to win their first major trophy against Germany at Wembley Stadium, having suffered defeat at Euros finals in 1984 and 2009.

Success would "make a difference", Wiegman added, as the women's game continues to grow in England.

"I think we have been an inspiration for the country already," she said.

Wiegman, who led the Netherlands to Euros glory in 2017, added: "You know when you win a major tournament it really makes a difference and that would make me very proud. But I don't think further than that.

"Most of the time you don't realise the impact until probably 15 years later."

Having lost on penalties to Sweden 38 years ago, England's previous appearance in a Euros final was in 2009 when they were beaten 6-2 to Germany.

Prior to February's Arnold Clark Cup victory, they had not beaten Germany on home soil - so could a long rivalry in the game now swing in England's favour?

"I don't know what is a perfect game because whoever is in front of us, we want to beat. We just really want to win the final," said Wiegman.

"We want so badly to show again how good we are and play our best game. Hopefully that will bring us the win. We talk about their players but not the history."

England's performances so far have been impressive - they thrashed Norway 8-0, came from behind to beat pre-tournament favourites Spain in the quarter-finals, before putting four past Sweden, ranked second in the world, in the semis.

They have celebrated heavily with the home crowd after each victory, dancing and singing to songs 'Sweet Caroline' and 'Freed from Desire'.

"I expected the crowds to be like this," added Wiegman. "I knew when we were winning, and we were getting to the knockout stages, people get really, really excited.

"That's just really great. But I also think that the team has played so energetically. The togetherness of the team has been contagious and that's what people like.

"If you play in big stadiums and they're sold out, then it's going to be really exciting. The stadiums here are so pretty and beautiful - that's England."

Having led the Netherlands to victory five years ago on home soil, she could become the first manager to win back-to-back women's Euros with two different nations.

"When I started my coaching career I didn't even know it was possible to be a full-time coach," added Wiegman.

"I am very aware of where we have come from in the women's game and where we are now. I'm just really enjoying it and I feel very privileged that I have been a part of this journey from a young kid until now."

'I needed to have a strong personality' 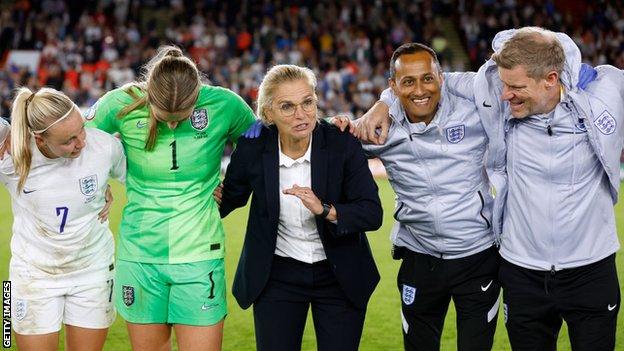 The Dutchwoman has been a driving force behind England's success at Euro 2022, but she had to fight to play football as a young girl.

Wiegman said she was "strongly opinionated" as a child which helped her stand up to those who said girls should not play the game.

She added: "I wasn't really quiet at school, I was strongly opinionated. Later on, I was a little bit more of an introvert.

"When I was young, football wasn't really accepted [for girls] yet. I had it so many times where people said to me, 'girls shouldn't be doing that, that's not very nice'. I just didn't care.

"I think I needed to have a strong personality otherwise I would have dropped out."

Wiegman is now known for her calmness and composure. She meditates and does yoga almost every day.

"I just make sure I do all those things and stay calm," she said. "We are so well prepared, so that gives me calmness too. I know we have done everything in our control.

"It might bring us a win or maybe not, but we know we have done everything within our control and that's OK."

That calmness in her personality came over time and Wiegman said the main thing she has learned from her coaching journey is who she is.

"That takes time," she added. "You need confidence to make choices. I was a teacher in my first job before a coach.

"When I started there were so many things that came in my path and I had to learn more about myself. You learn your strengths and weaknesses.

"Over time you get so much experience that you trust yourself. You know you did the right thing, no matter what the response of the person in front of you is."

This news item was provided by the BBC Sport - Football website - the original link is: https://www.bbc.co.uk/sport/football/62354710?at_medium=RSS&at_campaign=KARANGA

CategoryPremier League
Burnley get off to perfect start | Kompany: It’s a step in the right direction
Huddersfield Town 0-1 Burnley: Vincent Kompany’s side impress with dominant victory