England captain Leah Williamson says the Euro 2022 final against Germany on Sunday is "not the end but the start of a journey".

Whatever the result, Williamson hopes the Lionesses' success has had a wider impact on society in England.

They are chasing a first women's major tournament victory.

"What we've seen already is that this hasn't just been a change for women's football, but society in general and how we're looked upon," she said.

"There will be a moment of reflection. It's my job to go out and win but I hope this is the start; this is a marker for the future."

England, who are yet to lose a game under manager Sarina Wiegman, have gathered momentum throughout the tournament with some impressive performances.

They won all three games in the group stage without conceding a goal before coming from behind to beat pre-tournament favourites Spain in the quarter-finals and put four past Sweden in the semi-finals.

"In most workplaces across the world women still have more battles to face and overcome," added Williamson.

"For every success we make and change of judgement or opening the eyes of people who view women as someone who is equal - that changes society and that is a powerful message.

"These strides we take forward can impact everyone on that wider scale."

A decade ago, 70,584 spectators turned out at Wembley Stadium to watch Team GB beat tournament favourites Brazil at the 2012 Olympics.

But Williamson hopes more interest in women's football remains after the Euro final than it did back then.

"The fall-off since [the 2012 Olympics], we hope doesn't happen after this tournament. We can't have a lack of interest post-tournament because it defeats the point of everything we have achieved," she said.

"I fight every single day for us in women's football. It won't change [on Sunday], I will just do my job as normal, but I think it's an important message to come across." 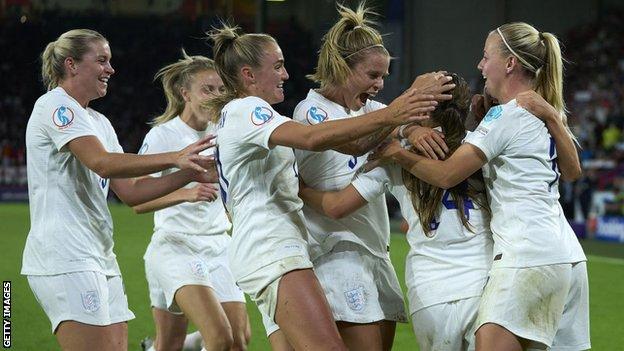 Tickets for Sunday's showdown at Wembley, which has a capacity of 87,200, have sold out. That means it could be the most attended Euros game ever for men or women.

Williamson said that "felt unachievable for a very long time".

"The people before me have had to fight. This is hopefully 90,000 England fans that will be behind the team who haven't had the opportunity to before."

Manager Sarina Wiegman that it is "just a football match" but she appreciates the hype and it is her job to take the noise away from the players.

"You don't start playing football or coaching to be in front of 90,000 people," she said.

"You just love your job and your work but it's really nice we will have that occasion.

"You see it, you're aware of it but you come back to what your job is - which is getting ready for Germany."

Wiegman also played down the significance of England's rivalry with Germany impacting the game.

"I know there's some rivalry. When the Netherlands play Germany there is a rivalry too," she said.

"But it is now. Whoever we play against there will be rivalry because we really want to win that final."

Eight-time champions Germany are used to spoiling England's party and they hope to do the same again on Sunday.

"In the beginning, Wembley will be English and I hope it will belong to us at the end," said the Germany manager.

"We want to play our game, be courageous, aggressive, give it our all, play as a team. This has worked well so far."

Captain Svenja Huth added: "Obviously we are very excited and the stadium is impressive even as it is empty. This will be the next big challenge for us, but we're looking forward to it."

Huth said the rivalry between the two nations is "not that important" but her manager said it was a "dream" match-up in the final.

The last time the teams met in a major tournament final, Germany won 6-2 in Finland at Euro 2009.

"I think for players it's not that important. There's a lot of media talk that pushes us a bit, but the focus is not on the past," said Huth.

Voss-Tecklenburg added: "It electrifies football fans. It has such a traditional history. I don't differentiate between men and women. It's a football feast.

"If we were allowed to dream, we would've chosen to play against England in this final, not anyone else."

This news item was provided by the BBC Sport - Football website - the original link is: https://www.bbc.co.uk/sport/football/62364228?at_medium=RSS&at_campaign=KARANGA