Before England's thrilling quarter-final win against Spain, Lionesses defender Lucy Bronze wrote a letter to herself. This is what she had to say.

As I talk to you now, you're an eight-year-old girl. You won't realise right now how lucky you are to have the family you have.

It's something that you probably take for granted until you get older, and realise the hardship that other people have, but your family is the best.

Your brother will support you in a very funny way by pushing you, challenging you and never letting you win. Always making sure you're the most competitive version of yourself. And your sister, although she is very shy, is very proud of you. 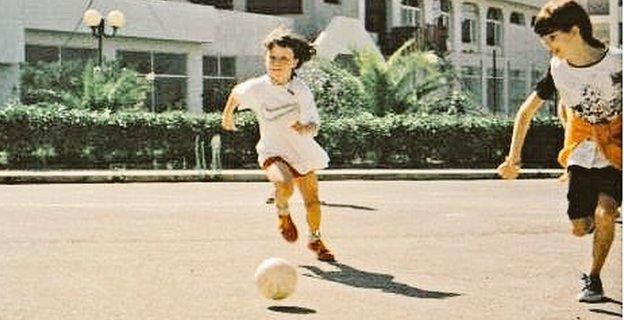 Bronze playing football with her older brother Jorge in Portugal

You're now a 12-year-old girl and you've had your first taste of what women's football really looks like. You get to see these superstars who are idols to you now. You see how successful they are, you see how much they inspire girls like yourself and it's the first time you realise that you could be a superstar as well.

Never doubt yourself. These role models are there for a reason, and they're the people that you will become.

You come off the back of finishing your degree, working in Domino's, working at five-a-side places pulling pints, some of the best times of your life to be honest, because you learned how to graft and work hard and you realise that nothing comes easy. But you know that your time is about to come.

You get your first major injury. People are starting to say that they're not going to pick you any more. That you're not good enough. You have no support apart from the family that love you so much.

Your rehab goes wrong, you get injured again. You feel like nothing is going right for you at this moment. There are some nights where you cry alone, but just know that these are the days that are going to push you even harder, because for every step that you take backwards, you take two leaps forward in the end. 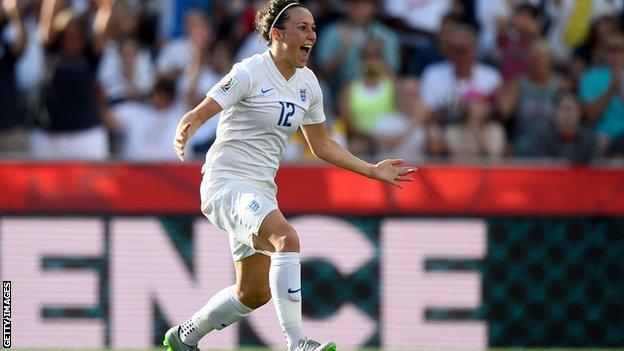 You're off to your second major tournament, in Canada in 2015. The manager has sat you down before the tournament and said 'you're going to be a squad player but if called upon you know you'll be ready'.

Then comes the first knockout game, and you're on the teamsheet ahead of Alex Scott for the first time ever. And funnily enough, Alex is the one that tells you in training 'Lucy, why don't you shoot more?'

You score the winning goal to send England through, everybody knows your name. This moment changes your life forever.

Here we are today. We've broken so many records as a team, you've hit the heights that you always thought you could hit. You're part of a home Euros like no other and everybody is full of confidence.

The next thing that we need to do is get ourselves to the final, and that is the missing step that you know that you need to take.

You never know what the future is going to hold, but right now you couldn't be happier with what you've already achieved, so let's go and achieve some more.

This news item was provided by the BBC Sport - Football website - the original link is: https://www.bbc.co.uk/sport/football/62253576?at_medium=RSS&at_campaign=KARANGA