Boss Sarina Wiegman said "it was time to party" after a historic victory for the Lionesses.

Ella Toone gave them the lead only for Lina Magull to force extra time, before substitute Chloe Kelly scored a 110th-minute winner.

"This is unreal. This is what dreams are made of," she told BBC Sport.

Kelly, who came on in the 64th minute, celebrated her first international goal by taking off her shirt and whirling it above her head.

After the final whistle, the Manchester City player - who missed 11 months of action after suffering an anterior cruciate ligament injury in May 2021 - was asked to sum up her feelings.

"Oh my God, look at them, it's amazing," Kelly added, before singing Sweet Caroline and then running off with the microphone. 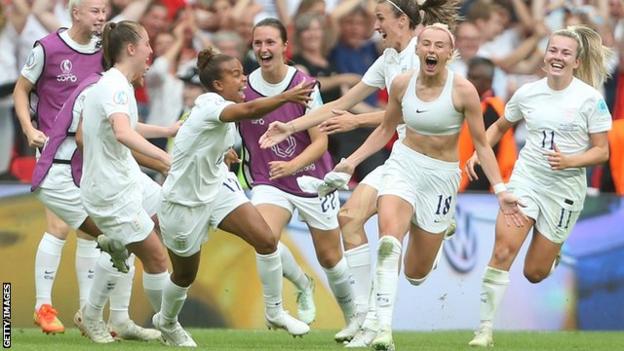 Chloe Kelly's celebration was similar to the one made famous by Brandi Chastain, who netted the winning penalty for the United States in the 1999 World Cup

She later returned and said: "Thank you to every single person. Honestly, it's amazing. This is what dreams are made of.

"It's unbelievable. To be here and score the winner, these girls are special, this manager is special. This is amazing. i just want to celebrate now."

The Lionesses will celebrate their historic win in front of fans at Trafalgar Square on Monday, an event that will be broadcast live on BBC One from 12:40 BST.

Wiegman has now won back-to-back European Women's Championships after guiding her home country the Netherlands to the title in 2017.

"I don't have any secrets," said Wiegman, whose side won all six games at Euro 2022, scoring 22 goals and conceding two.

"I don't think I realise what's going on - I need some time.

"Now we have won the Euros the expectation will go up again. First we will party."

"During our preparation for the Euros we brought in some players who played in 1971," she added.

"We should always remember the ones who went before us because they made a path for us. This team makes a path for the next generation."

'We have to win the World Cup now'

Defender Lucy Bronze, 30, said England should now target the World Cup, which will be held in Australia and New Zealand next year.

"This will probably sink in at the end of my career," added Bronze, who has played for the Lionesses since 2013.

"The younger players probably think this [winning trophies] is normal. We have got to go and win the World Cup now."

"I'm buzzing my head off," added Toone, who grew up practising playing football in her back garden in Tyldesley, near Wigan.

Leah Williamson was named England captain for Euro 2022 in April.

"I can't stop crying. We talk and we talk and we've finally done it," the Arsenal player told BBC Sport. 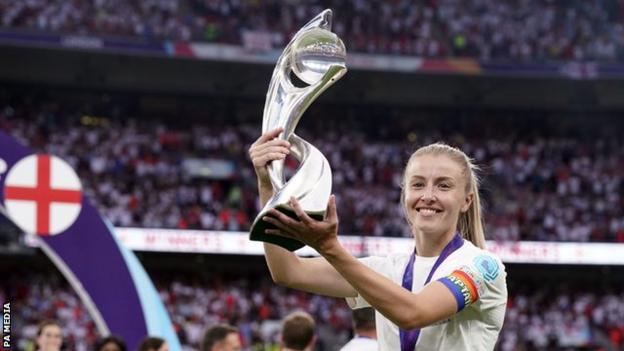 "It's the proudest moment of my life. I'm taking in every single second because I'll want to relive this for a long time.

Former England captain Steph Houghton, who missed out on the 23-player squad having not featured competitively since January due to injury, congratulated the team on social media.

"The girls only went and done it," she wrote on Twitter. "Unbelievable."

Germany are the most successful team in the history of the European Women's Championship, having won it eight times and their last success in 2013.

"At the moment the sadness overrides," said boss Martina Voss-Tecklenburg.

"You also feel just a bit empty, but I think that's completely normal. We wanted to fulfil this dream.

"In one year there is the World Cup, I think a lot of the players out there today will be there."

This news item was provided by the BBC Sport - Football website - the original link is: https://www.bbc.co.uk/sport/football/62371064?at_medium=RSS&at_campaign=KARANGA