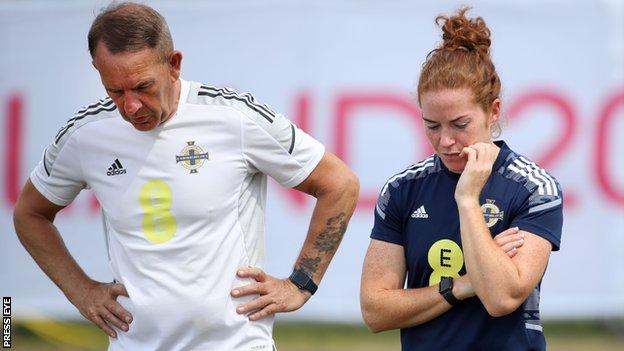 Northern Ireland manager Kenny Shiels has said he is "targeting" Euro 2025 before their final match at this year's tournament.

Shiels signed a two-year contract extension in April 2021 after guiding NI to their maiden major finals.

NI will play their final group game against hosts England on Friday after defeats in their opening two matches.

"It gives me really good time to be able to prepare to prepare," said Shiels.

"That is what we will be doing over the next couple of years, and we have to prepare to consolidate also."

Northern Ireland are set to have a changing of the guard when their Euros campaign comes to an end. Their have two final matches remaining in World Cup qualifying but they cannot progress to the finals in Australia and New Zealand next summer.

Captain Marissa Callaghan, who turns 37 in September, said her "focus is on England tomorrow night and we will see what happens after that".

Defender Sarah McFadden, who has been Northern Ireland's standout player, said she plans to carry on as the Euros had given her "more motivation" to continue playing at the age of 35, while defensive partners Julie Nelson, 37, and Ashley Hutton, 35, are in the latter stages of their international careers.

Liverpool midfielder Rachel Furness is 34 and has been a key player in Northern Ireland's unlikely qualification for the Euros. However, despite the experienced leaders in the team, Shiels has a host of young players coming through at the tournament.

The average age of Shiels' five substitutes in Monday's 2-0 defeat by Austria was 20, highlighting the young squad at his disposal as he aims to build for Euro 2025.

Despite introducing young talent on to the pitch against Austria, a defeat which ended any hopes of progressing from Group A, Shiels said "you could get a really bad outcome" if he decided to use all the "developmental players" from the start at St Mary's against an England side who defeat Norway 8-0.

"We are here for the experience to get better," he added.

"I'm turning it around in my head as to how much we can utilise that and how many players of the development age we can put in there.

"It could have an adverse effect on their career, so we have to be very, very careful.

"Senior players are here to get better and consolidate, and we have to do what is right for Northern Ireland women's football team.

"We have got almost every player on the pitch now." 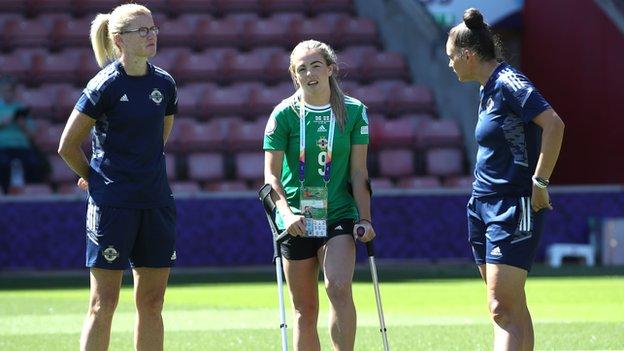 Shiels believes the loss of key striker Simone Magill to an ACL injury in Northern Ireland's opener with Norway has been "overlooked" and the absence of the Aston Villa striker "inhibited" their performance against Austria.

"We couldn't get up the pitch and we only had Marissa to take her position. It was good but I really wish we had Simone with us."

This news item was provided by the BBC Sport - Football website - the original link is: https://www.bbc.co.uk/sport/football/62155053?at_medium=RSS&at_campaign=KARANGA