Euro 2022: Sarina Wiegman’s ‘plan for every scenario’ paying off for England

Sarina Wiegman is a meticulous planner, but testing positive for Covid five days before England's Euro 2022 quarter-final against Spain, then returning three hours before kick-off to guide them to victory was probably not what she had in mind.

Wiegman, however, always has a plan B.

In the end, it was a recipe of all the things that make up tournament football on display in Brighton, and England still had the tools needed to get over the line in a nervy, frantic and dogged 2-1 win.

At the helm was Wiegman, imposing her calmness, ruthlessness and an efficiency which has, for the most part, been reflected by her players throughout the tournament.

"Sarina has planned for every scenario. She's got a plan for being 1-0 down with 10 minutes to go and it happened," said former England goalkeeper Rachel Brown-Finnis.

"It will have been hugely reassuring knowing that there was a plan. They will have talked about the 'what-if' scenarios."

The Dutchwoman has been in pressured situations before, leading the Netherlands to Euro glory on home soil in 2017, as well as guiding them through tense encounters to reach the final of the World Cup two years later.

And her influence on this game was crucial.

The response to her late return from Covid felt like a rallying cry for supporters heading into Amex Stadium, with one telling BBC Sport "it has made my day".

That meant when England came out to warm up in front of almost 30,000 fans, the atmosphere was already electric.

What followed was domination from Spain, bursting that crowd bubble, but England maintained an unwavering self-belief - they were unbeaten under Wiegman and had not conceded a goal in the tournament.

So when Esther Gonzalez put Spain 1-0 up it was the biggest test of character for this England side, who had only trailed once under Wiegman - in a 5-1 win over the Netherlands in June.

But Wiegman's composure did not slip and her response was immediate.

"This competition, whoever wins it, will not be won by 11 players. It will be won by the squad, the tactical changes, the substitutions," said former Liverpool defender Stephen Warnock.

"The changes that were made were so important. What you saw was players who were happy to play a different way to win the game.

Toone's 84th-minute equaliser, which took the game to extra time, was a demonstration of Wiegman's ruthlessness as she did not hesitate taking off record top-scorer Ellen White and Golden Boot leader Beth Mead.

"It's not hard to take players off, you just do what you think is best for the team," Wiegman said afterwards.

"Every game the substitutions have an influence and it shows the depth of the team. Everyone is on the same page, so when things change it doesn't matter.

"As a team we do that so well. Everyone knows their task and what they can bring to the pitch. I don't make the decisions by myself." 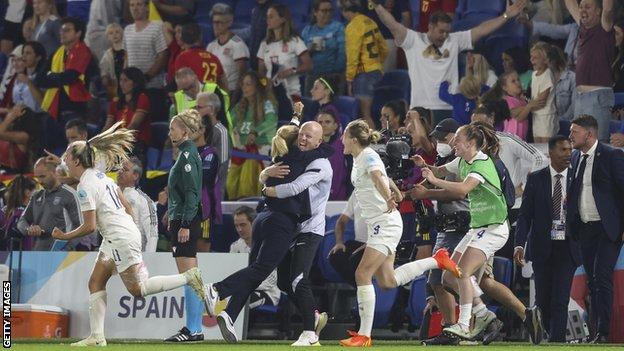 England - and Wiegman's - ability to change and add quality from the bench could be a deciding factor in Tuesday's semi-final against Sweden or Belgium.

Forward Russo has been directly involved in nine goals in her 11 games for England, while eight of those have come as a substitute.

Toone also has one goal and one assist in her past two appearances off the bench.

"It starts with the quality of the players," said Wiegman.

"We have so much quality in the team, so it is easier to make those substitutes and know they will make a difference. That is not me, that is the quality of the players."

The mask of Wiegman's calm demeanour slipped at the final whistle when she jumped into assistant Arjan Veurink's arms before taking to the pitch, fists clenched, shouting "come on" into the TV cameras.

She steered the Netherlands to victory on home soil in this competition five years ago, so can she come up with a plan to get England through the next two games?

"It happens as a result of years and years of work and practice, and Sarina Wiegman has come in and iced the cake."

This news item was provided by the BBC Sport - Football website - the original link is: https://www.bbc.co.uk/sport/football/62246303?at_medium=RSS&at_campaign=KARANGA