Euro 2022: Who are the big hitters England need to fear? 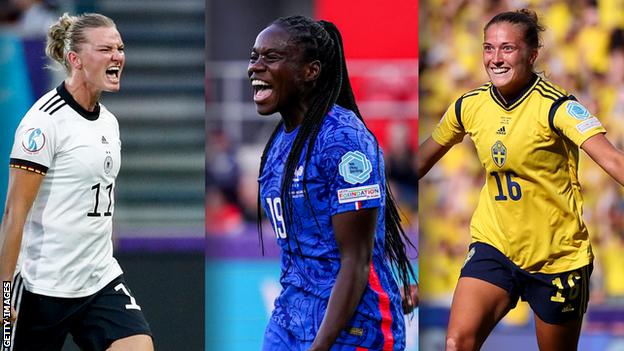 Germany, France and Sweden along with the Netherlands and Spain are among the favourite for the tournament

Two weeks of group games are over, 16 teams are down to eight.

The quarter-finals of Euro 2022 begin on Wednesday when England take on Spain at Brighton's Amex Stadium.

The Lionesses have been hotly tipped as favourites for the tournament, scoring more goals than any team has ever done in the group stage and conceding none.

Beth Mead is on course for the Golden Boot, with five goals.

But what about the other big hitters? How have the tournament's most highly-fancied teams got through the first phase and who poses the biggest challenge to England's quest for the trophy? 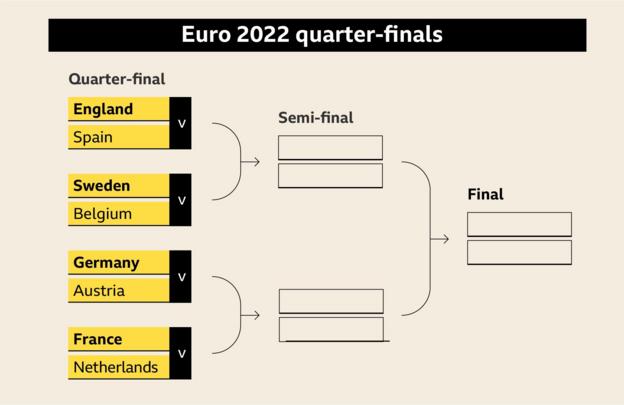 England could face Sweden or Belgium in the semi-final

There is no question Spain have had some bad luck in the build-up to Euro 2022 with record goalscorer Jennifer Hermoso ruled out through a sprained knee ligament and current Ballon d'Or holder Alexia Putellas suffering an anterior cruciate ligament injury on the eve of the tournament.

But they are still among the tournament favourites on account of their dominant possession-based style of play and an abundance of Champions League winners among their ranks, with 10 squad members representing Barcelona at club level.

Spain have done enough to get by in the group stages, beating Finland 4-1 and Denmark 1-0 but falling short against eight-time champions Germany.

They are yet to put in the statement performance that several of the other contenders have demonstrated and have lacked conviction in the final third.

Ex-England goalkeeper Siobhan Chamberlain, who watched Spain finish runners-up to England in February's Arnold Clark Cup, said they would have to be more ruthless to be successful.

"They struggle to break teams down. You've got to be clinical and if Spain want to win the Euros, they've got to find a way past that," she said.

This is the first time Spain have won two games at a Euros tournament, but they were unbeaten in 23 matches before their loss to Germany, and former captain Vicky Losada said there is still "a lot of talent" in the squad.

"I would love to go to the changing room and say 'believe in yourself'. We're seeing Spain not playing with the same energy, not enjoying the game - they're still good but maybe not as good as we were expecting," Losada said.

Germany have won six of the last seven Euros but have struggled with form and injuries in the run-up to Euro 2022.

They dropped to fifth in the world rankings and went out at the quarter-final stage at Euro 2017 and at the same point at the 2019 World Cup in France, as well as losing embarrassingly to Serbia, who are ranked 36th in Fifa's world rankings, in a World Cup qualifier in April.

Head coach Martina Voss-Tecklenburg expressed concern prior to the tournament over her side's ability to play in front of large crowds, but a 4-0 victory over Denmark and 2-0 against Spain had them comfortably into the quarter-finals, against Austria on Thursday, with a game to spare.

A 3-0 win over Finland in their final group game means they are yet to concede a goal at Euro 2022, with goalkeeper Merle Frohms having faced just five shots on target across the three games, the joint-fewest with England's Mary Earps.

Wolfsburg's Alexandra Popp, who, despite having 117 international caps, is appearing in her first Euros, has showed prolific form after returning from a long-term injury which kept her sidelined for 10 months in the build-up to the competition. 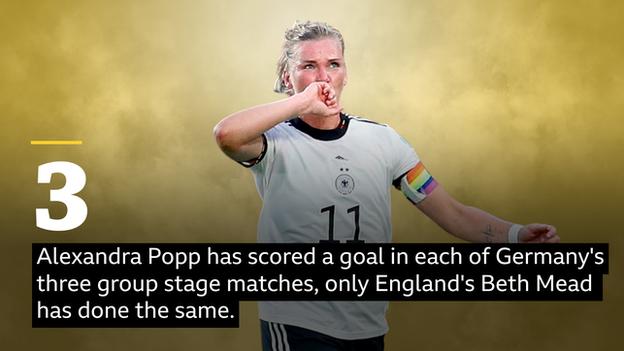 "There's a narrative that England must be the favourites now, but we cannot forget the Germans are starting to gain momentum," former England goalkeeper Karen Bardsley told the Daily Euros podcast.

"England, Germany and France have been the three most impressive sides so far. The good news for England about that is the other two are in the other half of the draw."

Should Germany beat Austria to progress to the semi-final they could meet France or the Netherlands.

"Efficient is the best way to describe Germany, they have overcome the challenges put in front of them in the three games and I have been so impressed. I can see an England v Germany final," said former England forward Sue Smith on BBC television.

As the highest ranked European side and second in Fifa's world rankings, Sweden are tipped as one of the strong favourites for the tournament.

After pipping the Netherlands to top spot in Group C on goal difference they will face Belgium in the quarter-final on Friday.

After their opening game against the Dutch resulted in a 1-1 draw while their 2-1 victory against Switzerland required a late winner from 19-year-old Hanna Bennison, some said they had perhaps not lived up to the hype.

But a 5-0 thrashing of Portugal in their final group game cemented their position at the top of the group, prompting Scotland international Jen Beattie to suggest that "the sleeping giants seem to be awake".

"Sweden are always pretty consistent at major tournaments - they always go under the radar, they don't play the prettiest football but they always get far in tournaments. It's no surprise that they are through," Beattie added.

Asante said: "To see them get lots of goals against Portugal that will only breed confidence and momentum going forward. When they start clicking in all departments they will be hard to beat. They will progress to the semi-final in my opinion."

France, ranked third in the world, have been knocked out at the quarter-final stage in the last three Euro tournaments and face a tough game against holders the Netherlands on Saturday.

Paris St-Germaint forward Marie-Antoinette Katoto suffered an ACL injury in the second game and her scoring prowess will be a big loss to France.

Former England midfielder Fara Williams said that is something they will "have to bounce back from" but labelled Corinne Diacre's side "inconsistent" after they blew Italy away 5-1 in their opening game but put in a less emphatic performance against Belgium to win 2-1.

Former England forward Kelly Smith said: "We know them as the choke team - when they have to win they just don't do it, it's happened a number of times. When it matters can they perform and do it? Probably not."

Going for their first major title, France will be encouraged by the performance of Melvine Malard in the 1-1 draw with Iceland - she was brought in for the final group game to replace Katoto, looked lively and scored France's only goal. 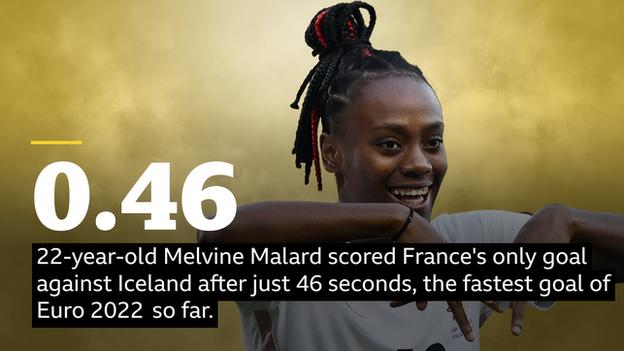 Holders and one of the pre-tournament favourites the Netherlands qualified for the quarter-finals with two wins and a draw, but they have struggled to assert the same form that saw them win the tournament in 2017.

First-choice goalkeeper Sari van Veenendaal and defender Aniek Nouwen both suffered injuries in the opening game against Sweden, with the former ruled out of the tournament.

Former England international Smith said on BBC Two that she is "not convinced by this Dutch side" suggesting that "they need to play better" after their 4-1 victory over Switzerland.

"The front three struggled - Miedema is the key for them and when she's not in it I do not like this Dutch team," said Smith.

This news item was provided by the BBC Sport - Football website - the original link is: https://www.bbc.co.uk/sport/football/62185887?at_medium=RSS&at_campaign=KARANGA