Euro 2022: Why England fans are right to get excited – but players must stay grounded after 8-0 win

When England put their seventh goal past group rivals Norway and the Amex Stadium erupted into a rendition of 'Football's coming home', you would have been forgiven for getting caught up in the moment.

The Lionesses raced into the quarter-finals of the Euros with a sensational 8-0 win over Norway that served as a statement of intent to their tournament rivals.

"That is as good as it gets," former England striker Ian Wright said, while ex-goalkeeper Rachel Brown-Finnis described it as a "spectacular performance in every department".

Any doubts about the hosts' credentials following a lacklustre opening performance against Austria were swept away on Monday night.

Hat-trick hero Beth Mead and Ellen White, who added two goals, led the post-match celebrations, dancing in delight as players enjoyed a lap of honour, while supporters sang and applauded the team long after the final whistle.

It was everything manager Sarina Wiegman had hoped for - entertainment, ruthlessness and three points.

"You could really tell the players enjoyed it on the pitch," she said afterwards.

"I hope [the fans] enjoyed it. We want to make the nation proud. We tried to play our best game and we did. It is three points but if you win 1-0 or 8-0, we didn't win anything yet. We will stay grounded."

'We need to let them get excited' 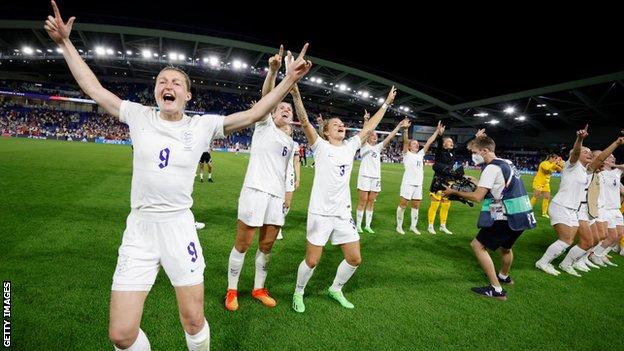 Brown-Finnis said it was a performance from England that demonstrated a "complete team".

Every time England pushed forward there was a roar of excitement from the crowd and the 8-0 scoreline could easily have been extended.

"England played them to pieces," said Jonas Eidevall, manager of WSL side Arsenal. "They looked two or three levels above Norway. I expected an even game, but it was very impressive from England."

So as England raced into the quarter-finals with a game to spare, is it understandable fans were getting carried away about their prospects?

"We want the fans to get excited and want to come to the next game. We need to let them get excited while we stay in the moment. I'm sure we will do that."

Defender Alex Greenwood added: "It's a moment we have to enjoy and share with the fans but at the same time we have to recover and get back to business.

"It doesn't happen often but we have to remain professional and focus on the next challenge."

'Definitely the most special game' 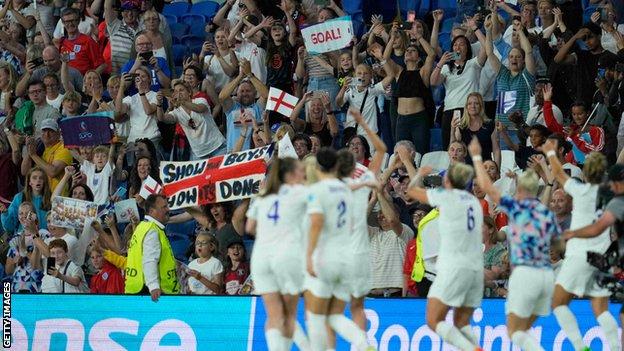 Scott, who is appearing at her 10th major tournament, is rarely lost for words but the 6-0 half-time scoreline left her speechless.

"It's definitely the one that has shocked me the most. We came in at half-time and I didn't even have any words for the girls. I was just clapping," she said.

"It was definitely the most special game. We're trying to not play to the occasion too much but it's so hard to not let yourself enjoy it. Long may it continue."

"There was a fair bit of singing. I wouldn't say I'm good at singing but I gave it a go! Obviously everybody is really happy. It's important we do celebrate the wins," said Hemp.

'Important to make a statement so teams fear us' 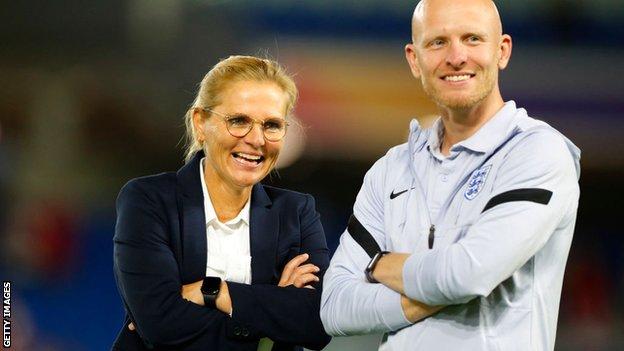 There have already been some impressive performances from England's tournament rivals at Euro 2022.

Germany put down a marker with their 4-0 victory over Denmark on Friday, while Spain got off the mark with a comfortable 4-1 win over Finland.

France also got off to a good start as they beat Italy 5-1, while two of the most fancied teams, Sweden and defending champions the Netherlands, played out an exciting 1-1 draw.

But has England's emphatic victory sent a statement to their rivals that they are now the team to beat?

"It's important to have results like that," said Hemp.

"We have so much respect for every opposition we come up against but it's important to make a statement so teams do fear us."

White added: "Obviously 8-0 is a big statement, but we're staying cool and collected. We're focused on our own task but we're delighted to come away with an 8-0 win, a clean sheet and three points. It's not going to be easy to sleep."

Wiegman, who has demanded more ruthlessness from her players in recent months, summed up her emotions with one simple sentence: "I think I can be very satisfied tonight!"

This news item was provided by the BBC Sport - Football website - the original link is: https://www.bbc.co.uk/sport/football/62129143?at_medium=RSS&at_campaign=KARANGA