Everton have signed central defender James Tarkowski on a four-year deal following his departure from Burnley.

The 29-year-old, whose contract expired at Burnley at the end of last month, becomes Frank Lampard's first signing this summer.

The ex-Brentford defender revealed the role of Everton boss Lampard was key in moving to Merseyside.

"I'm excited to have joined Everton. It's a massive club. I'm really looking forward to the years ahead and I'm thankful for the opportunity that I've been given," Tarkowski told evertonfc.com.

"Speaking to the manager, it was very important to see what he wants from his players and his team, what he saw in me and why he wanted to sign me. Speaking to (director of football) Kevin Thelwell was also a factor. They both spoke about the ambition here which was really important for me.

"I'm an ambitious person, I want to achieve, I want to win things and I've come here to be successful.

"And then there are the Everton fans. The support they gave the team last season was incredible. You saw just how big the fanbase is. Despite a difficult season, Everton fans got behind their team more than ever.

"I think they are a massive factor about this club. Hopefully successful times are ahead and, with the talent we have in the squad, we can give the fans something they really enjoy.

"I think the manager recognised my strengths, saw how I could fit into his system and hopefully improve the team. He also saw my character and leadership skills - that what I can bring to a group will be good and positive.

Everton director of football Kevin Thelwell said: "We are delighted to welcome a player of James' quality to Everton and believe he will be an excellent addition to our squad.

"The statistics show that James has consistently been one of the Premier League's most reliable defenders in recent years. Added to his playing attributes, his excellent leadership skills and experience will be a huge benefit, too.

"James is a player I've admired for many years and Frank was very keen to bring him to the club. We look forward to him being a highly-valued member of our squad next season and in the years to come." "After majority shareholder Farhad Moshiri admitted "mistakes have been made" by the club during his ownership, the signing of an established ready-made centre-back is a step in the right direction.

"Tarkowski provides much-needed leadership, durability and no shortage of quality to a creaking defence that often dictated how Frank Lampard approached games during a fraught final few months of the campaign.

"Lampard was heard telling his players during his first few training sessions to "enjoy the ball", but eight defeats in his first 12 matches in all competitions meant Everton needed to become more pragmatic and more direct in their style.

"Injuries to Yerry Mina and Ben Godfrey denied him a settled partnership during those opening few months in charge.

"It was about eking out results as Lampard's preferred brand of possession-based football was shelved. He will hope the arrival of Tarkowski can provide his side with the solid base from which to express themselves again." 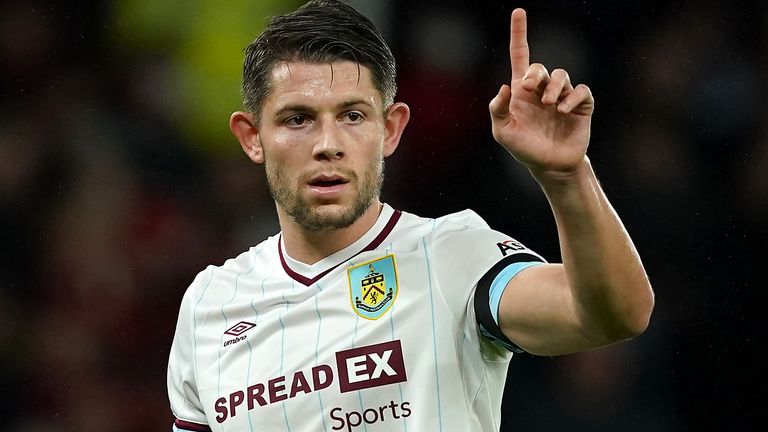 Kevin Campbell told Sky Sports News: "I think it's a much-needed signing. Tarkowski is a no-nonsense defender. He does his job. And he's always available, which is really important, and he just gets on with it.

"I think he'll be a favourite at Goodison because, if I'm honest with you, he just concentrates on defending.

"If they fix that then they'll be fine, and Tarkowski's signing goes a long way to fixing a real problem area."

Who will be on the move this summer before the transfer window closes at 11pm on September 1?

This news item was provided by the SkySports | News website - the original link is: https://www.skysports.com/football/news/11688/12635512/james-tarkowski-everton-complete-signing-of-defender-on-four-year-deal-after-burnley-departure