Last updated on 2 hours ago2 hours ago.From the section Everton

When James Rodriguez joined Real Madrid in June 2014 he had the world at his feet. Six years later he is just hoping to find stable ground in Merseyside.

The Colombia attacking midfielder's £20m move to Everton is the latest step on a journey that has taken him from World Cup Golden Boot to heralded Galactico to unwanted loanee and finally the Bernabeu exit.

So what player are the Toffees getting - global superstar or high-profile flop? And where will the 29-year-old fit in at Goodison Park?

BBC Sport, with the help of our chief football writer Phil McNulty and Spanish football expert Andy West, attempts to answer these questions and more about Carlo Ancelotti's first major signing as manager...

Why is Rodriguez a big deal?

Rodriguez had already established a strong reputation across Europe before 2014, courtesy of his time at Porto and Monaco.

He won the Portuguese league three years running before the age of 21, during which time he became the youngest to win the division's player of the year award, aged 20, in 2012, before Monaco bought him for £38.5m.

It was the World Cup in Brazil, though, that really propelled him into the limelight as his six goals in five matches helped Colombia reach the quarter-finals.

These goals were a showcase for his all-round ability - two calm close-range finishes, a penalty, a header from a corner and, best of all, a chest and sublime volley from 20 yards against Uruguay, which was voted the best of the tournament.

The move to Real Madrid followed, a fee of £71m making him at the time the fourth most expensive footballer in history. Their manger at the time: Ancelotti.

His arrival was met with resounding positivity. He was joining a forward line already boasting Cristiano Ronaldo, Gareth Bale and Karim Benzema, was greeted by thousands of euphoric, flag-waving Madridistas at his unveiling at the Bernabeu, and spoke of making history in the footsteps of Zinedine Zidane.

Has he really been a failure since joining Madrid?

His trophy haul would suggest not - two La Liga titles, two Champions Leagues, two Club World Cups, along with a couple of Bundesliga titles and a German Cup winner's medal from his loan spell at Bayern Munich.

But the tale of his Real career can be split into two parts.

The positive section came - encouragingly for Everton fans - with Ancelotti as his manager.

The second, somewhat disappointing part, came under his idol Zidane.

Rodriguez arrived at Real Madrid with high expectations and, at first, he met them.

Under the management of Ancelotti - with whom he enjoyed a warm relationship - Rodriguez started 40 games and scored 17 goals during his first season at the Bernabeu. But then Ancelotti left and he would never come close to those numbers again.

He particularly struggled after the arrival of Zidane in early 2016. Although there was rarely outright hostility between them - their relationship did not descend to the kind of breakdown we have seen with Bale - it is clear Rodriguez never really earned Zidane's trust and he was allowed to leave on a two-season loan deal to Bayern Munich in 2017.

The problem was mainly positional. Other than a brief phase in 2017 when Isco filled the role, Zidane has never lined up with a central, playmaking number 10, which is Rodriguez's best position.

He could not adapt to playing on the wing, so there was no natural place for him in the team.

Rodriguez certainly was not a total failure for Real Madrid and showed his enormous quality on many occasions, but he will be remembered as a "nearly" player rather than a star.

What do the numbers tell us?

As suggested above, his best season of the past six in terms of attacking return was his first at Real. But he still returned decent numbers in the five campaigns after. 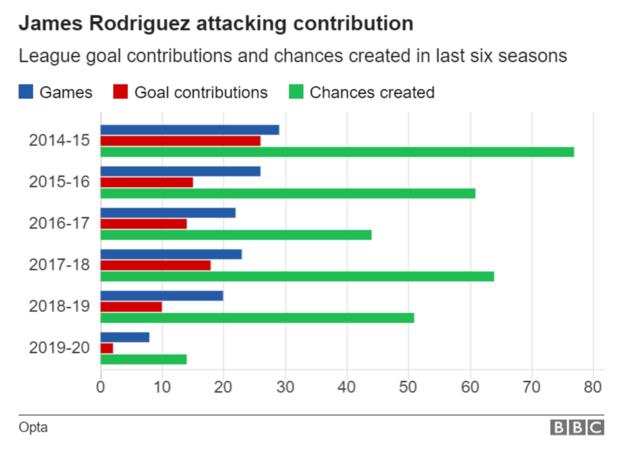 His output stacks up well against his peers in La Liga... 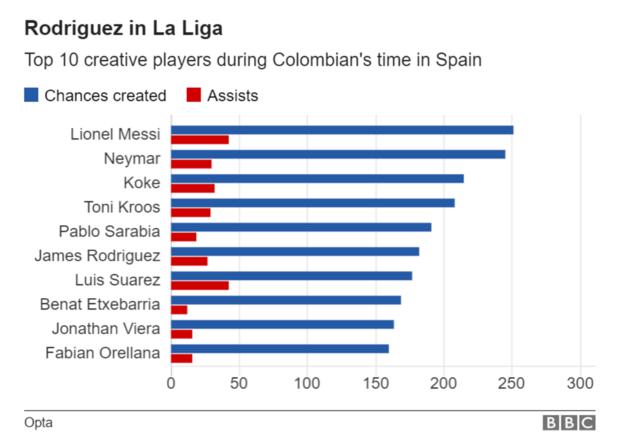 And in the Bundesliga from his time there... 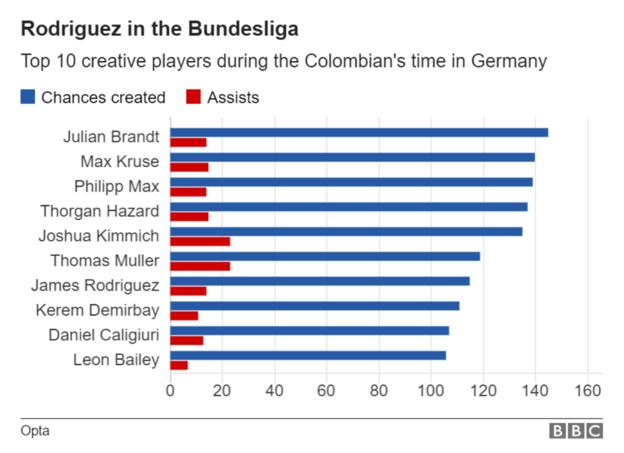 Where will he fit in at Everton?

Rodriguez is undoubtedly a statement signing for the Toffees and one who should boost their attacking performance. He also hints at a change of approach from the club - one with Ancelotti at its centre.

Everton's deal for Rodriguez is a significant moment not merely because of the global profile he will afford the Merseysiders but because it illustrates the pulling power and influence of Ancelotti.

It may be a brutal assertion but it is highly unlikely, to put it mildly, that he would have left Real Madrid for Everton had Ancelotti not been at Goodison Park.

This was exactly the sort of attraction owner Farhad Moshiri had in mind when he appointed Ancelotti in December. He knew A-listers who may not have considered a move to the club before might put it on their radar now the calm, charismatic Italian is manager.

Rodriguez's role will be to add creativity and goals to Everton as Ancelotti rebuilds the front end of the team and injects fresh impetus into a midfield that simply was not fit for purpose last season, offering little support in attack and meagre protection in defence.

The Colombian is likely to play just behind Everton's strike pair of Richarlison and Dominic Calvert-Lewin, adding potency and unpredictability to one area of the team that is a strength.

In the wider context, it is an interesting deal because it suggests Ancelotti is wielding great power over transfer dealings, demanding his own men.

Everton director of football Marcel Brands favours younger signings who can improve and increase in value - but the arrival of Rodriguez suggests he and the club accept the need to accede to Ancelotti's wish for experienced players for the here and now.

This news item was provided by the BBC Sport - Football website - the original link is: http://www.bbc.co.uk/sport/football/53998282