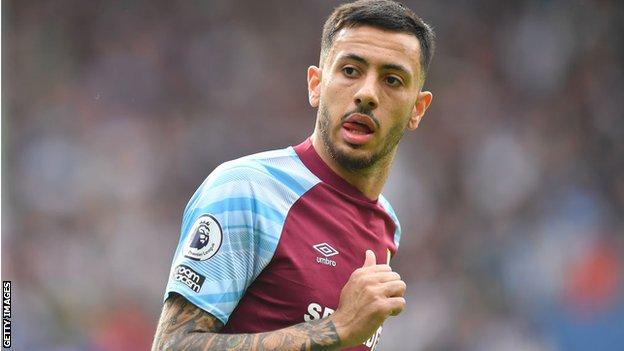 Everton have signed Burnley winger Dwight McNeil on a five-year contract in a deal worth about £20m.

McNeil made 140 appearances for the Clarets and has missed just two Premier League games since December 2018.

The former England Under-21 international is Everton's third summer signing after the arrival of his former Burnley team-mate James Tarkowski and Ruben Vinagre on loan from Sporting.

"When I heard about Everton's interest I wanted to get it done straight away because of the club and how good the team is.

"I feel playing under a manager like Frank Lampard, he will help me to get my stats up - and that is what I want to do and improve my game.

"I am a direct runner with the ball. I like to get on the ball, cut inside and create chances for the team."

McNeil was second in the Premier League for the most successful dribbles (90) last season and third in the list for the most crosses (199).

He made his England Under-21 debut against Slovenia in October 2019, alongside new Everton team-mates Tom Davies and Ben Godfrey.

McNeil joins an Everton side attempting to rebuild after flirting with relegation last season and losing influential Brazil forward Richarlison to Tottenham earlier in the summer.

"Last season was difficult for the club, but going into the last bit of the season, you saw from the players and fans the desire, mentality and togetherness they have," McNeil added.

"They came together and were united as one. That is massive for players and gives you that extra bit of confidence.

"This season we want to do better and I want to be part of the team to help them do that."

This news item was provided by the BBC Sport - Football website - the original link is: https://www.bbc.co.uk/sport/football/62328718?at_medium=RSS&at_campaign=KARANGA