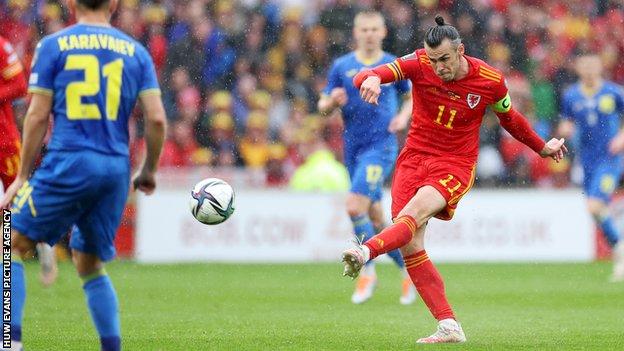 The 32-year-old warned there would be consequences if the congested football calendar seen in 2022 continues.

Bale, who is a free agent after being released by Real Madrid, added he is looking for regular club football next season to prepare for the World Cup.

"They need to look after players, without the players there is no product," said Bale.

"There will be consequences in the long term, people's bodies can't deal with that kind of calendar year after year.

"Something has to change, the people at the top of the game have to do something, but unfortunately money comes into it.

"It's a business at the end of the day, but for player welfare the money needs to be overlooked."

Wales face Belgium in the Nations League on Saturday, a fourth fixture in 10 days, before travelling to Rotterdam to play the Netherlands next Tuesday.

In May, Belgium midfielder Kevin de Bruyne was critical of the scheduling of international fixtures so soon after the end of the club season, and described the Nations League as "unimportant".

Bale called for the number of games to be reduced to help protect players.

"Someone mentioned to me over lunch the other day that Kevin de Bruyne could play 79 [games] next season after just a three-week break," he said.

"It's too much, things obviously need to change, every player will tell you there are way too many games.

"It's impossible to play at a high level for that amount of games."

'Difficult to find the strength'

Belgium defender Thomas Meunier, who is in line to start against Wales on Saturday, agreed with Bale and suggested a syndicate of players may be the required to bring about a change.

"I totally agree with him [Bale], I've complained several times in the Belgian press," said Meunier.

"The people who decide are not on the pitch, they cannot feel what it is like to play 50 or 60 games in a season.

"Most of the players just want a bit of rest after really important games at the end of the season.

"We love to play football and it's our job, but depending on your physical ability, your season, and your injuries it sometimes can be difficult mentally and physically to find the strength to give 100% on the pitch.

"People coming to the stadium pay for quality, to see stars, but if we are obligated to play more time the national coaches will pick 30 players nobody knows."

'I'm not going to Getafe, that's for sure'

There has been much speculation surrounding Bale's future at club level, including links to hometown club Cardiff City.

The forward says he has not had talks with any clubs to date, but is simply looking for regular game time to put him in the best shape for the World Cup.

"I just need to play games and I'll be good to go [in Qatar]," Bale added.

"I think once I get back into playing regular football my body will get more robust, rather than being in and out.

"It's difficult when you're in and out of a team to get a rhythm in terms of your fitness and health.

"You want to play to get that fitness for the World Cup and help the club you're at, so wherever I go it will be a win-win because I'll be playing and hopefully playing well while getting ready for the World Cup."

Wales players and fans will be talking about their World Cup qualification until the tournament starts in November.

Bale, whose deflected free-kick sealed their place in Qatar, says the relationship the players have with boss Robert Page and his backroom staff is fundamental to the success they have had in recent years.

Page stepped up as interim manager in November 2020 after Ryan Giggs was arrested on suspicion of assaulting his girlfriend, allegations he has denied.

Since Page took charge he has led Wales out of the group at last year's Euro 2020 before ending the nation's 64-year wait to qualify for a World Cup.

"I think he is the long-term manager," said Bale. "I don't think there's a question in the changing room or from the fans.

"He's done an incredible job, coming in in difficult circumstances.

"Everyone has a great relationship with him, we can have a bit of fun, but when we need to work hard we do, it's a great balance.

"Even his backroom staff with Alan Knill and Kit Symons have been incredible, that's why we've achieved big things."

This news item was provided by the BBC Sport - Football website - the original link is: https://www.bbc.co.uk/sport/football/61763101?at_medium=RSS&at_campaign=KARANGA