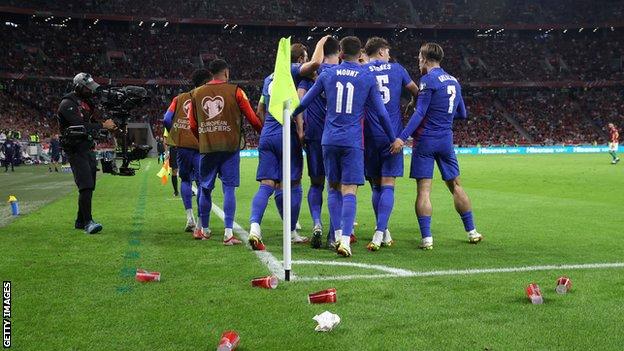 Hungary have been ordered to play games without crowds after repeated racist behaviour by their supporters.

But due to a Uefa regulation their football association is using, a child, accompanied by an adult, is allowed to go on Saturday.

"Hopefully the young people in the stadium will recognise why this opportunity has happened," said Southgate.

In September 2021, Manchester City forward Raheem Sterling and Borussia Dortmund midfielder Jude Bellingham were both targeted by racist abuse during England's 4-0 win over Hungary in a World Cup qualifier at the Puskas Arena.

Objects and a flare were also thrown onto the pitch by the home fans during the hostile encounter.

Southgate said his team will have to "deal" with whatever atmosphere awaits them on their return to the 67,000-capacity stadium.

He added: "We have made our feelings clear on where we stand on inclusivity and our feelings in terms of racism. The message will be it was unacceptable the last time we played there.

"Maybe this will be part of the education for the next generation. We have the same situation in our country."

After playing Germany in Munich on Tuesday, England will face the same behind-closed-doors sanctions as Hungary when they host Italy at Molineux next Saturday. The game will be without fans because of the poor behaviour of supporters at the Euro 2020 final at Wembley,

However, the Football Association is also planning to use Article 73 to invite a number of under-14 clubs within a 50-mile radius of Wolverhampton to apply for complimentary tickets - although only around 2,000 fans are expecting to be in attendance.

Although Southgate said he was unaware of the rules regarding inviting children and "surprised" supporters will be allowed inside both stadiums, he acknowledged "education is the key" to resolving these issues.

"Hungary will feel like we do about having restrictions on home games and don't want it again," he said.

"Everyone learns from every experience they have been through. Our players just wanted to focus on the football. The sanctions are a grey area. We are inviting fans to Molineux. Whether it's appropriate (number of fans) - that's for Uefa to decide."

England play four Nations League group games in the month of June as Southgate looks to define his squad ahead of the World Cup in Qatar this winter.

Southgate confirmed Manchester City midfielder Phil Foden has tested positive for Covid-19 and will not be involved in the game against Hungary.

"[Foden] has had to leave but hopefully he'll be able to meet up when we get back from Germany," said Southgate.

"Fikayo [Tomori] and Marc Guehi arrived with injuries but are progressing well," said Southgate. "They won't be involved tomorrow but they have a chance against Germany.

"Raheem Sterling has missed a couple of days with illness and he is touch and go, but everybody else is fully fit."

Following their four games this month, England complete their Nations League campaign in September with their final two games before the World Cup.

This news item was provided by the BBC Sport - Football website - the original link is: https://www.bbc.co.uk/sport/football/61683928?at_medium=RSS&at_campaign=KARANGA

CategoryPremier League
Southampton to profit from Liverpool’s predicted Sadio Mane sale
Who is the favourite to sign Jesse Lingard?