It was another high-scoring weekend in the Premier League, with Leicester hammering Manchester City 5-2.

Chelsea came from 3-0 down to draw 3-3 with West Brom, while Manchester United edged Brighton in a 3-2 thriller.

Liverpool beat Arsenal 3-1 in the final game of the weekend, while the biggest win saw West Ham beat Wolves 4-0. 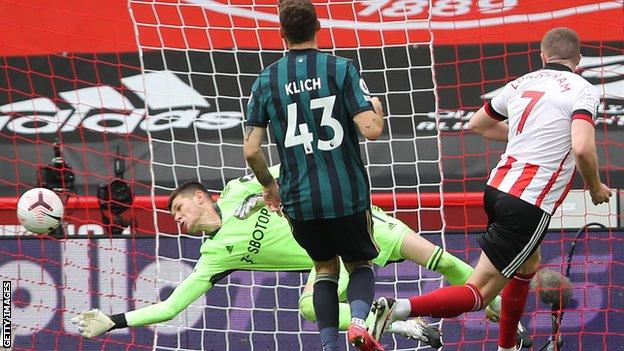 I must be honest, I didn't know an awful lot about Illan Meslier but by the end of the game I knew everything I needed to know. The Leeds keeper made two remarkable saves from John Lundstram and another from George Baldock in a first half full of commitment from both sides. The more I saw of him the better he got. I haven't seen a Leeds keeper with this sort of promise since I first watched a young Mervyn Day 40 years ago.

Did you know? Meslier is the sixth goalkeeper aged under 21 to keep a top-flight clean sheet for Leeds, after Stan Moore, Gary Sprake, David Harvey, John Lukic and Paul Robinson. 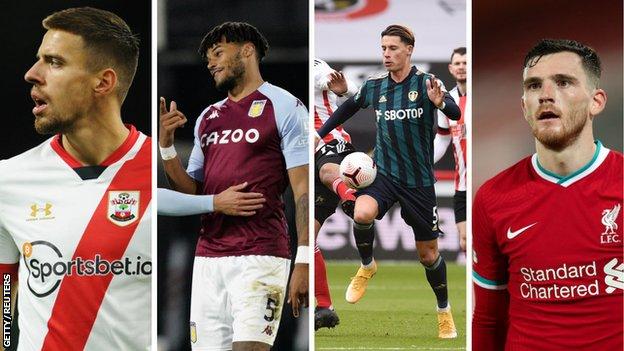 Jan Bednarek: Southampton's first points of the season and their first victory. On balance they were arguably the better side at Turf Moor. This was a spirited performance by the Saints who defended brilliantly. Jan Bednarek caught the eye on a number of occasions. What I found most disappointing, however, was Burnley's Chris Wood going to the ground having felt Bednarek's hand on his back. Wood is 6ft 2in and 14 stone and went down like Bambi on ice. Bednarek wasn't impressed.

Did you know? No Saints player made more clearances (13) or interceptions (three) against Burnley than Bednarek.

Robin Koch: Oh how I wish fans had been allowed into this game. The Yorkshire derby between Sheffield United and Leeds was a brilliant watch. This was a game only for the totally committed and Leeds centre-back Robin Koch was at the heart of the battle. There's something not quite right about Leeds being back in the Premier League and not hearing their anthem 'Marching on Together' sung loud and proud by their fans. They would have shaken Bramall Lane to the ground the way their team performed. A cracking game and a pity someone had to lose in the end.

Did you know? Koch made more clearances than any other Leeds player (three), while he also completed 87% of his passes against Sheffield United.

Tyrone Mings: Last week it was Tyrone Mings who was creating opportunities for his team-mates to score. This week he's among the goalscorers himself. What Mings and Villa will value from their victory over Fulham is their second consecutive clean sheet. The defender has come a long way since his days at Ipswich and Bournemouth, and his signing is proving to be an inspired decision.

Did you know? Half of Mings' Premier League goal involvements (six in total in 52 games) have come in his last four appearances (one goal, two assists).

Andy Robertson: It's not often you see Andy Robertson making mistakes at the back and gifting opportunities for the opposition to score. A rare mistake by the young Scot. Nevertheless I was impressed how the Liverpool defender never allowed the error to affect his game and used it to inspire the rest of his performance. The Reds are starting to steamroll their opponents, especially at Anfield. Even Arsenal, who I expect to finish in the top six this season under Mikel Arteta, proved no match for the champions.

Did you know? Robertson has scored (two) or assisted (five) a goal in seven of his last eight Premier League games for Liverpool, failing only against Chelsea in this run. 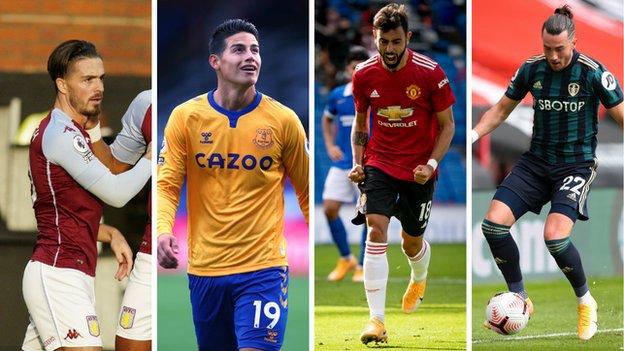 Jack Grealish: Jack is back. I said at the end of last season, when Villa achieved what seemed at one stage to be the impossible and stay in the Premier League, that he should move on. Well he ignored my advice and remained at his boyhood club doing what he does best - helping his team win matches. The England international was instrumental in Villa's victory over a Fulham side devoid of any defensive knowhow. The Cottagers cannot survive in this league if they continue to defend like this. What is more worrying, neither can Fulham boss Scotty Parker.

Did you know? Since the start of last season, Grealish has had a hand in 15 Premier League goals (nine goals, six assists), five more than any other Villa player in that time.

Bruno Fernandes: This player has nerves of steel and once again showed his worth. The emphatic way Bruno Fernandes sealed the victory for United tells you all you need to know about the Portuguese star. Why Neal Maupay panicked in the dying seconds of the game and gave a penalty away made no sense but neither did the protests by Brighton's players after the game. Why Adam Lallana felt the need to try and confront the referee regarding his decision was just as baffling. What did Lallana expect? That Chris Kavanagh shouldn't have given the penalty? As for Brighton manager Graham Potter questioning the time added on by the official as a sincere argument, is he serious?

Did you know? Bruno Fernandes has been involved in 17 goals in his 16 Premier League appearances (nine goals, eight assists).

James Rodriguez: For the third consecutive fixture James Rodriguez makes my team of the week. His inclusion is as much a reflection on Everton's rise to the top of the Premier League table after three games as it is his outstanding performances. The Colombia international made it a pretty miserable afternoon for Crystal Palace after providing assists for both of Everton's goals. However, the decision to award Everton a penalty when Joel Ward was judged to have handled the ball was nothing short of outrageous. I have more to say about this incident in the Crooks of the Matter below.

Did you know? Rodriguez has created more goalscoring chances for Everton in the Premier League this season than any other player (10), setting up three more at the weekend.

Jack Harrison: The cross was magnificent. In fact the ball was so good from Jack Harrison that he raised both his hands aloft to signal that a goal was imminent. Meanwhile agony was etched on Aaron Ramsdale's face in the Sheffield United goal as he knew there was nothing he could do about the quality of the ball. All that Patrick Bamford had to do was to keep his eyes on the ball, hold his nerve and nod it into the back of the net. Game over. Occasionally the cross is better than the goal itself and this was one of those moments.

Did you know? No Leeds player created more scoring opportunities against Sheffield United than Harrison (five), who assisted the only goal of the game. 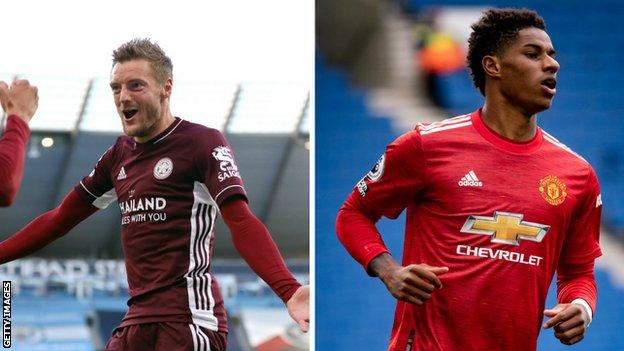 Marcus Rashford: This was a game Manchester United didn't deserve to win but they did. Their defeat by Crystal Palace in their opening game of the season was well short of what was expected by a United side. Thank goodness for Marcus Rashford because Brighton deserved at least a point and should have had one if not for Maupay's handball in the final minute of the game. The England striker took his goal brilliantly after dumping Ben White on his backside and smashing the ball past Mat Ryan with his left foot. Brighton's Leandro Trossard hit the woodwork on three occasions. Someone needs to tell him you get nothing for hitting the woodwork.

Did you know? Since the start of last season, Rashford has scored more Premier League goals than any other Manchester United player (18).

Jamie Vardy: He got two goals away at West Brom and a very impressive hat-trick away against a rather flat Manchester City on Sunday. Jamie Vardy is looking as good as he's ever done. In an interesting formation by Brendan Rogers, the former England striker scored two penalties and the most audacious goal to give the Foxes the lead. Meanwhile City look like they have not solved the problem they had last season: defenders who can't work out when to challenge in the penalty area and when not to.

The Crooks of the Matter

Players, managers and coaches, please put an end to this nonsense. I said last week in The Crooks of the Matter that this ludicrous new handball rule was in danger of destroying the enjoyment our national sport and it is doing precisely that. The way the new rule is being administered by referees means every defender that enters his own penalty area might as well show his attacker to the goal and invite him to score! It's madness.

The decision to award Everton a penalty after Joel Ward was judged to have handled the ball had me falling about with laughter.

Palace boss Roy Hodgson is held in the highest esteem and for him to publicly state that he cannot understand how we have allowed these rules to come into the game is an indictment of those who have allowed it to happen. In the past certain rule changes have caused terrible controversy - but nothing like this. Remember the four-step rule for goalkeepers and then the restrictions to the back pass? Some of you may have even noticed that no-one gives foul throws any more, which is quite disgraceful in my view. However, nothing has caused the game's participants such offence like this new handball fiasco.

The question is what should be done about it? Well I think the Palace manager provided us with the answer in his post-match interview. Management and players have to put a stop to this outrage. If Hodgson is being so badly affected by this new rule change then so are others, and if they don't put a stop to it quickly then Covid may be the least of the game's worries.

This news item was provided by the BBC Sport - Football website - the original link is: http://www.bbc.co.uk/sport/football/54328590