Eight-time European champions Germany got their Euro 2022 campaign off to a flying start by hammering Euro 2017 runners-up Denmark at a sold-out Brentford Community Stadium.

Goals from Bayern Munich team-mates Lina Magull and Lea Schuller put the Germans on course for victory in the first heavyweight showdown of the tournament.

Felicitas Rauch twice struck the bar in the space of three first-half minutes for Germany before the lively Magull fired past keeper Lene Christensen for her 20th international goal.

Schuller headed the second from a corner and Wolfsburg's Lena Lattwein made it 3-0. Germany added a fourth through substitute Alexandra Popp.

On a disastrous night for Denmark, they finished with 10 players after substitute Kathrine Kuhl was sent off for a second yellow card in the dying moments.

With Group B rivals Spain defeating Finland 4-1 earlier on Friday, Germany moved into top spot before their match with La Roja next Tuesday.

It was a statement win by Germany who would have won by a more handsome margin but for Christensen.

Magull might have had a hat-trick but the Denmark keeper made a string of fine saves to keep her side in the game before Germany struck three times in the second half.

"We played an outstanding game," said Germany boss Martina Voss-Tecklenburg. "We were incredibly dominant and aggressive." 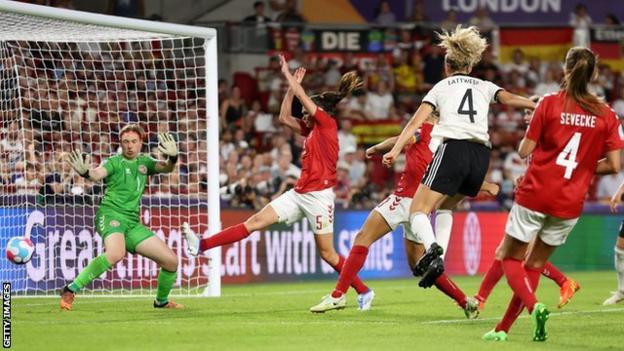 The days when Germany won this tournament as a matter of course are over. They are the most successful country in the competition's history, winning it eight times, including six in a row between 1995 and 2013.

They were knocked out at the quarter-final stage in 2017 by Denmark, but five years on they ruthlessly turned the tables on the Danes in west London.

Germany started like a team that meant business as Wolfsburg's Rauch twice hit the bar before Magull was denied by a fabulous save.

But there was nothing Christensen could do when Magull stole the ball off Stine Ballisager Pedersen and powered into the penalty area to score the 12th goal of this tournament.

Christensen's save from Magull on the stroke of half-time was crucial, but the fourth game of Euro 2022 was decided when Schuller pounced from a corner moments after Denmark had made a triple change.

Denmark capitulated as Lattwein and then Popp, who made her Germany debut in 2010, ensured the most successful country in the history of the European Women's Championship got off to a fine start. 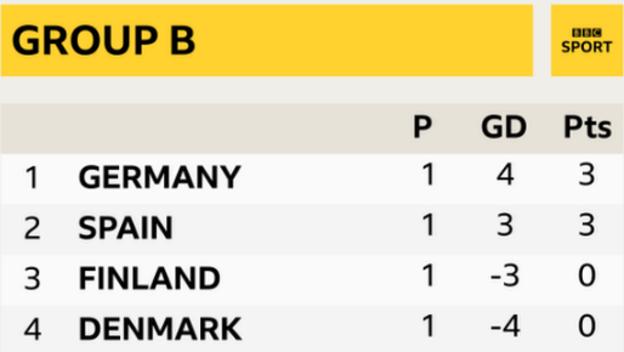 Denmark fighting to stay in Euro 2022

Denmark came into the tournament with lots of self-belief, but besides Chelsea star Pernille Harder there are not many players who can make an impact on their own.

A sea of red shirts filled Brentford Community Stadium to cheer on the 2017 finalists, but the Danes struggled to carve out chances, with Harder - one of the best players in the world - unable to test Germany keeper Merle Frohms.

Signe Bruun, who played on loan at Manchester United last season, went closest to equalising but was thwarted by Frohms' flying save.

Trailing 1-0, Denmark made a triple change early in the second half in an attempt to haul themselves back into the match.

Forward Nadia Nadim, who fled to Denmark from her home country Afghanistan with her mother and four sisters after her father was killed by the Taliban, was among those sent on.

But within moments Denmark, whose players wore black armbands in tribute to the victims of last week's shooting in a Copenhagen shopping centre, were 2-0 down after Christensen was crowded out at a corner.

Their night went from bad to worse as they conceded another two before teenager Kuhl was sent off.

With Germany and Spain starting with big wins, Denmark now face a battle to reach the quarter-finals.

Their next game is against Finland at Milton Keynes next Tuesday, a match they have to win to give themselves a chance of advancing.

This news item was provided by the BBC Sport - Football website - the original link is: https://www.bbc.co.uk/sport/football/62083028?at_medium=RSS&at_campaign=KARANGA