Germany v England: ‘I want to take it up a notch’ – Jamal Musiala dreams big

When Germany host England in the Nations League on Tuesday, Three Lions boss Gareth Southgate will be hoping his side won't be left reflecting on the one that got away.

Stuttgart-born Jamal Musiala is expected to feature for Germany having chosen to represent his birth country rather than England in February 2021, despite having spent much of his childhood in London and impressing in the academies at Southampton and Chelsea.

The 19-year old, who joined Bayern Munich from Chelsea in July 2019, has since become the club's youngest debutant and goalscorer - and youngest Champions League player and scorer.

Musiala, who played for England sides at under-15 to under-21 level, also became the youngest player to represent Germany at a major tournament when he came on against Hungary in the delayed Euro 2020 finals.

Speaking to BBC Sport before the game in Munich (19:45 BST), he outlined his desire to achieve even more, his World Cup ambitions, favoured position and why he has benefitted from the footballing culture of both countries.

After a promising debut season at Bayern, Musiala was handed a surprise call-up for Euro 2020. Despite being restricted to just two brief substitute cameos, Musiala still made an impact, having a hand in the goal against Hungary that sent Germany into the knockout stages.

With 11 caps and one goal, he has built on that with a man-of-the-match performance against the Netherlands in March, while an influential second-half cameo on the left wing in the 1-1 Nations League draw in Italy on Saturday has led to calls for a starting spot.

Musiala believes he is benefitting from the influence of two top-class German coaches with contrasting styles at club and international level.

He added: "We play a very attacking game with Julian Nagelsmann at Bayern, sometimes with only three at the back and many attackers in the front.

"It's all about control, positioning on the ball, but also good counter-pressing to win the ball back immediately after losing it.

"Hansi Flick's style of play with Germany is more aggressive, like it was when he was at Bayern. We want to win the ball back high up the pitch to start attacks. It also means the opposition are further away from goal. We practise our high pressing a lot in training.

"I'm desperate to perform well and make myself part of that squad - my first World Cup would be an amazing feeling.

"I want to take it up a notch, more physicality, stamina, get into better goalscoring positions and defensive discipline." 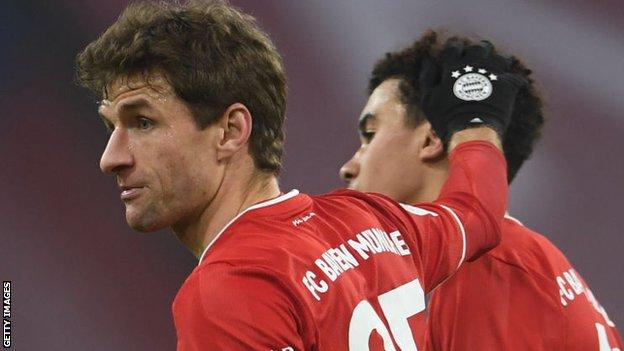 Musiala's strengths were obvious early in his Bayern career, with his Champions League debut coming in December 2020 - just a few months after his club debut aged 17 - in a 1-1 draw at Diego Simeone's Atletico Madrid.

"I was very nervous," he said. "That was the biggest game of my career at the time. I tried to play as freely as possible, not to think about the situation and play my natural game."

Atletico's experienced midfield of Saul Niguez and Koke struggled to pick up Musiala's movement in between the lines, which allowed him to dribble directly at their defence. He completed three dribbles in 76 minutes and displayed his technical security in possession with a 92% pass accuracy.

"I have trained these movements since I was little with my dad. He encouraged me to take on and beat players - and I have always kept that with me.

"You have a lot less pressure and more time to develop yourself and you can play a lot freer. With the tactics here in Germany you get taught to win at a young age."

Despite playing mostly in deeper central midfield areas last season, Musiala was still able to contribute with eight goals and six assists for Bayern. This equates to a goal or assist every 141 minutes and an increased appetite to score more.

"If you play in midfield, you have to find different ways to join the attack and late runs in behind defences can be very difficult to defend," he added.

Tipped to replace a German 'genius'

Having come through the Chelsea academy as a striker and attacking midfielder, Musiala has now played for Bayern's first team on the left and right wing, as a number 10 and in a deeper central midfield role.

He said: "There are a lot of things you do differently in midfield. If you are up the pitch, you have to be more aware of your surroundings, look for more passes in behind, have better decision-making to keep the ball sometimes, rather than dribbling, and show defensive discipline to be in the right position.

"It will only make my all-round game better."

Despite this versatility, Musiala's future for club and country is widely expected to be in the number 10 role as a potential successor to Bayern and Germany legend Thomas Muller.

"Everyone knows that attacking midfield is my preferred position because that's where I have the game in front of me," he added.

"I can learn a lot from Thomas. Since my first training session, we've always talked about the game.

"The way he sees the game is genius because he sees where there will be space before it even happens, he's a couple of moves ahead.

"Before he receives the ball, he already knows what pass to play. He leads our structure when we're pressing.

"When I get the opportunity to play higher up the pitch as a number 10, I already have some ideas of what could further my game."

England will hope they do not suffer from Musiala's meteoric rise and forward thinking on Tuesday.

This news item was provided by the BBC Sport - Football website - the original link is: https://www.bbc.co.uk/sport/football/61707364?at_medium=RSS&at_campaign=KARANGA