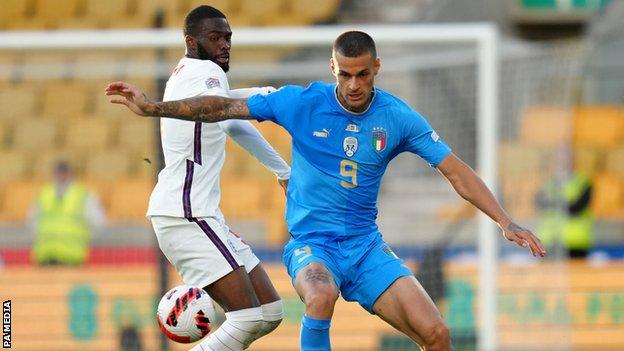 West Ham have agreed a £30.5m deal with Sassuolo for Gianluca Scamacca.

The Italy striker, 23, is set to become West Ham's fourth senior signing of the summer, with personal terms still to be agreed.

Hammers boss David Moyes has spent the close season trying to bolster his forward options and was in talks with Chelsea's Armando Broja.

Scamacca was the second-highest Italian scorer in Serie A last season with 16 goals from 36 games.

He was rewarded with his international debut last September and has now won seven caps, without scoring.

Scamacca's signing would follow the arrivals this summer of Nayef Aguerd,Alphonse Areola and Flynn Downes.

The Hammers also made an offer to Jesse Lingard, who scored nine goals in 16 Premier League starts for David Moyes' side while on loan from Manchester United in 2020-21.

But the England forward, 29, has decided to join promoted Nottingham Forest on a free transfer after leaving United at the end of his contract.

This news item was provided by the BBC Sport - Football website - the original link is: https://www.bbc.co.uk/sport/football/62264843?at_medium=RSS&at_campaign=KARANGA