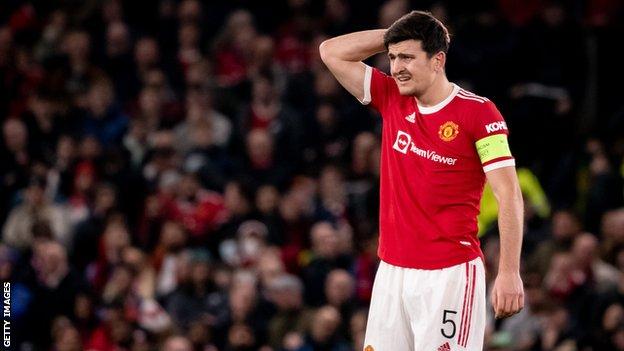 Harry Maguire says he can accept criticism of his performances but a line was crossed when he received a bomb threat earlier this year.

In April, police conducted a sweep of the Manchester United and England defender's home, where he lives with his fiancee and two young children.

"I'm big enough to accept people getting on my back and saying I can improve," said the 29-year-old.

"There is a line where we are human beings, I do have a family."

Maguire added: "People ask if it affects me. My mentality is that it doesn't affect me too much but when it comes to bomb threats, it is more about family. My fiancee Fern.

"I'm just happy my kids are at an age where they don't read things and see things on the news.

"If my kids were an older age, they could see things and go to school and people are speaking about it. That is when it affects you a little bit more."

Maguire admits he endured a "tough" 2021-22 season, in which United finished sixth with their lowest points tally in the Premier League era.

The former Leicester defender received some intense criticism for his performances, but accepted that came with the territory of being a high-profile player.

"Yes, it's been a tough season - no hiding away from that," he said.

"I'm my biggest critic. Although there are a lot of critics out there, I'm actually still my biggest.

"But every day I'm trying to improve. Obviously this season has been a challenging part of my career. But during a career of 10 or 15 years, if you want to play at the top, you're going to have ups and downs."

Maguire was booed by a section of England fans during their 3-0 win over Ivory Coast in a friendly in March.

But Maguire, who has 42 international caps, said: "From my England debut, the England fans have been amazing with me. I have had some amazing times.

"I am not going to let the minority - I don't know how many it was, 10-20 people - doing that in the Ivory Coast game to affect my relationship with the England fans, no."

This news item was provided by the BBC Sport - Football website - the original link is: https://www.bbc.co.uk/sport/football/61656630?at_medium=RSS&at_campaign=KARANGA