Last updated on 3 hours ago3 hours ago.From the section Football 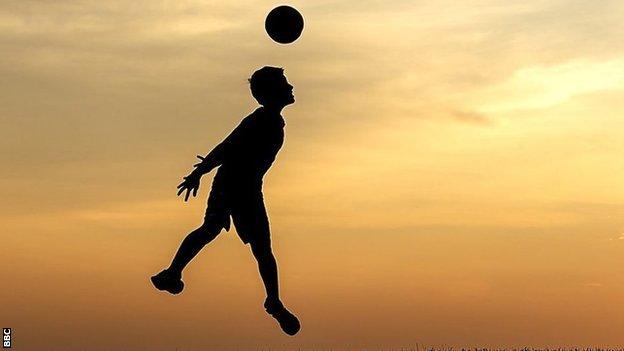 A ban on heading by players in matches at under-12 level is to be trialled by the Football Association.

It follows research suggesting former footballers are more likely to die from brain disease than other people.

The FA has been granted approval from the International Football Association Board to introduce the trial in England from the start of the 2022-23 season.

It will be co-ordinated with the county FA network, leagues, clubs and schools throughout the country.

"Should the trial be a success, the aim is to then remove deliberate heading from all football matches at U12 level and below from the 2023-24 season," an FA statement said.

Sir Bobby Charlton, who won the World Cup and played for Manchester United, has been diagnosed with dementia.

Research into football and head trauma, led by consultant neuropathologist Dr Willie Stewart, has shown professional footballers are three and a half times more likely to die from dementia than people of the same age range in the general population.

Children aged 11 and under are no longer taught to head footballs during training in England, Scotland and Northern Ireland, while FA guidelines for coaches also put limits on how much heading older children should do.

Last year new guidelines recommended professional footballers in England should be limited to 10 "higher force headers" a week in training.

"The FA will continue to explore further ideas, in consultation with stakeholders in the game, to reduce heading in youth football without fundamentally changing the fabric of the game," Monday's statement from English football's governing body added.

Astle's daughter Dawn, the project lead for neurodegenerative diseases in football at the Professional Footballers' Association, welcomed the trial.

"We want all our children to enjoy their football, but they must be able to play safely," she said.

"The proposed new trial to extend the heading guidelines already in place for training to matches is a logical and sensible step.

"Football has a duty of care to continue to mitigate against the risks of heading a ball. This obligation includes youth football but also applies to care of players in the elite professional game.

"Going into the 2022-23 season, all professional clubs must incorporate the appropriate heading guidelines into their training regimes. Their responsibility extends to their youth, women's and men's teams."

Dr Adam White, senior lecturer in sport and coaching sciences at Oxford Brookes University, described the trial as a "watershed moment" for football.

"This will not only help prevent concussions, it will also help stop CTE (chronic traumatic encephalopathy)," he said.

"We need to protect kids' brains from these repetitive head impacts and I strongly urge other sports like rugby to take similar steps to prevent kids from brain trauma. We can act now to protect the future."

At the weekend, former Wales rugby union captain Ryan Jones revealed he has been diagnosed with early onset dementia aged 41 and probable CTE.

He has joined a class action being taken against World Rugby, the Welsh Rugby Union and the Rugby Football Union for allegedly failing to protect players from the risks caused by concussion.

Dr Stewart said more needed to be done to help former players affected by repeated blows to the head.

"It's too late to change the game for them, they have got the damage, we need to think about how we can support them and that is where sport can step in," he told BBC Radio 5 Live's Drive programme.

'There is no going back from this crucial trial'

Speaking on the same programme, the league's coordinator Gary Cornforth said: "Most kids try not to head the ball anyway so we thought let's go with it and maybe somebody will take notice and start thinking about not having heading generally, certainly in youth football.

"At our age group, you can have football without heading. The more adventurous coaches see it as a challenge, how to get their kids playing football on the ground. Players adapt."

Paul Edwards, director of clinical services at Dementia UK, said: "This decision from the FA is important as it shows an increased awareness of the damage that can be caused to the brain from prolonged heading of a football - especially in a young child or adult.

"It is also a prime example of ways to potentially mitigate increased diagnoses in the future."

Dr Judith Gates, chair and co-founder of Head for Change, a charitable foundation focused on brain health in sport, said the decision was "a constructive step towards making their footballing world safer".

She added: "This action illustrates the recognition from the FA and IFAB of the need to protect young players and is a tacit acceptance of the dangers of head impacts.

"More questions will emerge, more answers will be sought, but this important conversation is no longer being avoided. There is no going back from this crucial trial."

This news item was provided by the BBC Sport - Football website - the original link is: https://www.bbc.co.uk/sport/football/62208661?at_medium=RSS&at_campaign=KARANGA