Huddersfield head coach Carlos Corberan has resigned from his position with Danny Schofield stepping up to take charge.

Spaniard Corberan, who guided the Terriers to the Championship play-off final last season where they were beaten by Nottingham Forest, met with head of football operations Leigh Bromby on Wednesday night before quitting his post after two years in charge, with assistant Jorge Alarcon also leaving the club.

The Terriers have not revealed whether Corberan, who had previously worked as assistant to former Leeds boss Marcelo Bielsa, had received an offer from another club.

Huddersfield have announced Schofield will now lead the team ahead of their season-opener at home to Burnley on July 29, which is live on Sky Sports.

Bromby said: "It is with sadness that we have accepted Carlos' resignation. He was obviously a big part of what was a fantastic season in 2021/22, but he has subsequently come to us over the last 24 hours and made it clear that he doesn't think he is the man to take us forward.

"The timing is disappointing, with our preparations for the new season already under way.

"Danny Schofield will now step up to lead the team. He knows the club, the players, our coaching programme, and our structure as well as anyone and is ideally positioned to give us continuity. 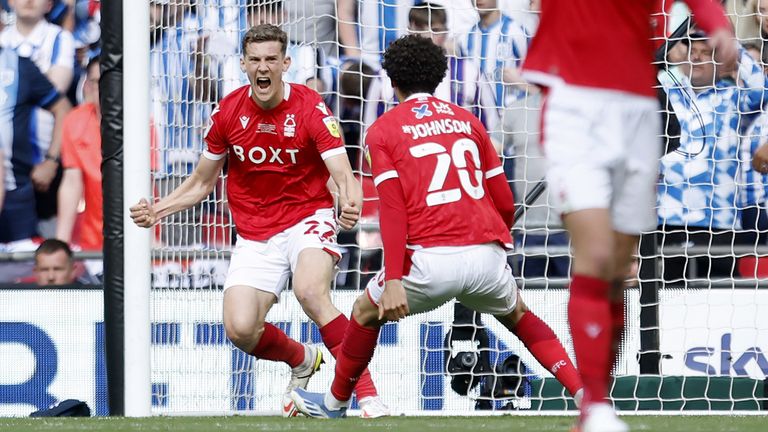 "Danny is highly rated and well respected across football and, this summer, turned down an opportunity to become head coach of a club in the top division of a European league because he believes in what we're doing here. His work at our club has been outstanding, and he's earned this opportunity.

"Danny will work with our fantastic staff, including Narcis Pèlach, as we prepare for our first game against Burnley on July 29.

"I would like to thank Carlos for his hard work at the club. I've really enjoyed working closely with him over the last two years, and I wish him the very best for the future."

Corberan took on the role of head coach for the first time when he succeeded Danny Cowley at the John Smith's Stadium after ending his three-year spell as a coach at Leeds.

The Terriers, relegated from the Premier League in 2019, struggled in Corberan's first season, surviving a second successive brush with relegation to the third tier.

But following a successful recruitment drive in the summer of 2021, Corberan guided the club to a third-placed finish last season.

The Terriers beat Luton in the play-off semi-finals, but lost 1-0 to Nottingham Forest in the Wembley final.

Huddersfield chairman Dean Hoyle urged the club's fans to give Schofield their full backing as they prepare for a fourth season in the Championship after dropping out of the top flight.

Hoyle said: "I know the timing of this news will come as a real shock to our supporters. We felt the same when Carlos asked to meet Leigh on Wednesday evening and made it clear he would be leaving, as we have been working together to plan for the new season.

"Everyone at the club sincerely thanks Carlos for his hard work over the last two seasons and for the way he has helped to take us forward. I really hope he goes on to have a great career.

"I know change like this, particularly when it's out of the blue, can be worrying for supporters. I assure everyone that we will do all we can to continue to drive this club forward after a really positive 12 months. We need to have trust in what we have built at the club and keep faith in what we collectively believe we can achieve through hard work and purpose.

"All I ask is for everyone to get right behind Danny, the staff, and the players, as you always do, as we enter the new season."

Corberan: Honest thing to do was step aside

Corberan later released a statement on Twitter, saying his departure had been "a difficult decision but one I gave a lot of thought to and have made based on my great affection for this club".

He added: "As a coach my approach to my work is based exclusively on the strongest commitment to and utmost alignment with the policy of the club I'm serving because that is the only way to ensure the dedication required to manage a football team.

"Leading this club over the past two seasons has been a pleasure and made me feel extremely proud.

"However, I have the utmost respect for everyone at this club and its supporters and that is why I feel the need for us to end our relationship.

"There are times in life when the most honest thing to do is to step aside on amicable terms in the best interests of both parties."

This news item was provided by the SkySports | News website - the original link is: https://www.skysports.com/football/news/11688/12647489/carlos-corberan-huddersfield-head-coach-resigns-from-role-with-danny-schofield-to-take-charge