Israel U19 1-3 England U19: Gutsy England crowned European Under-19 champions

Head coach Ian Foster praised England's "togetherness" after they came from behind to beat Israel and win the European Under-19 Championship.

Oscar Gloch put Israel ahead before Callum Doyle equalised to force extra time in the final in Slovakia.

"It's probably the most together that I've seen a group," said Foster.

It is the second time in five years England have won the competition, with keeper Aaron Ramsdale, now at Arsenal, and Chelsea midfielder Mason Mount part of the side crowned champions in 2017.

"I'm just thrilled to win the trophy and the boys are just delighted to be European champions," added Foster, who took charge in 2020. 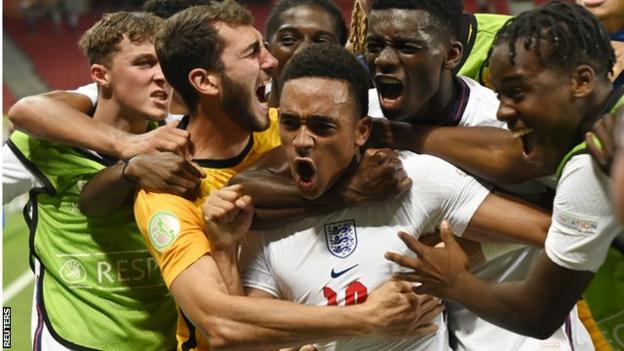 The former Hereford and Kidderminster striker, who was previously head coach of England Under-18s, added: "We got a sense how much it meant to them in March when they qualified, because this group missed out on their Under-17s Euros because of Covid.

"My job is difficult because I can only pick so many players.

"But the ones we picked were desperate to come and you can see they love playing for England. We should be so proud of them.

"It takes time to get that spirit and togetherness, which they've got. It helps you cope with anything and the amount of support they give each other, the camaraderie in the group."

England sailed through their group before coming from behind to beat Italy in the semi-final.

Once again they had to dig deep against an impressive Israel team who surprised France in the semi-finals.

For the second successive game, England made a slow start and were punished when Gloch produced a clever turn and finish.

England got to half-time without conceding a second and turned it around after the break.

Once full-back Doyle pounced to make it 1-1 following Jarell Quansah's header across the six-yard box, Ramsey was sent on.

He injected some much-needed pace and energy into the play and more chances started to arrive.

Chukwuemeka, who has been one of England's standout players at this tournament, struck the post in normal time before England seized control with two goals in the second half of extra time.

An outstanding delivery by captain Harvey Vale allowed Chukwuemeka to make it 2-1 from almost point-blank range and Ramsey struck after a superb run by fellow substitute Liam Delap.

"You dream of times like this," said midfielder Chukwuemeka, who has made 14 Premier League appearances for Villa.

"We're a very close group and we have been since last September and the very first camp, so we feel that bond now and it shows on and off the pitch."

This news item was provided by the BBC Sport - Football website - the original link is: https://www.bbc.co.uk/sport/football/62011651?at_medium=RSS&at_campaign=KARANGA